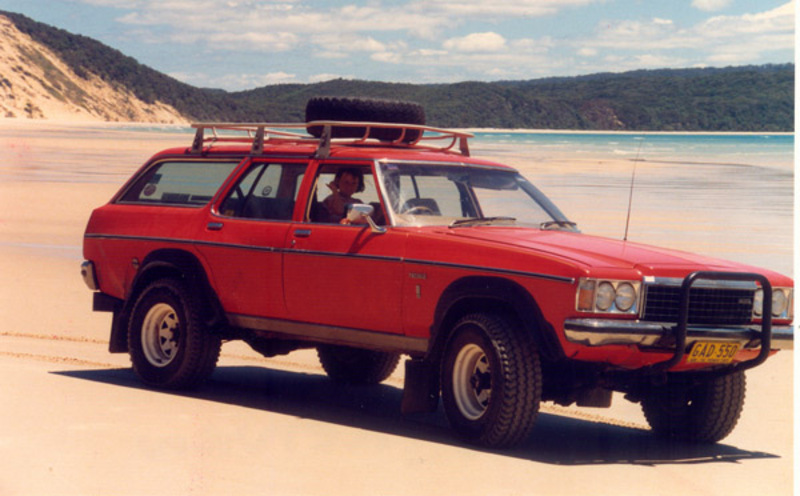 In 1976, Arthur Haywood, a Tasmanian engineer and off-road enthusiast, developed a prototype for a four-wheel drive Holden based on the Kingswood
One of the most successful 4x4 conversions undertaken on a mainstream vehicle was undoubtedly that by Arthur Haywood, of the Tasmanian-based Overland Motor Company, on Holden's Kingswood.

In 1976, Arthur Haywood, a Tasmanian engineer and off-road enthusiast, developed a prototype for a four-wheel drive Holden based on the Kingswood.

Haywood conceived the Australian-made 4WD Overlander as an alternative to expensive American imports. Of the vehicles available, he decided that the Holden had the best chassis with potential for 4WD conversion. In addition he liked Holden's V8 and the strong Turbo 400 Hydramatic auto, power steering and large radiator and box chassis.

In June 1976, Haywood went to America where he sourced the Dana M.20 transfer case, which mated best to the Turbo 400 auto transmission. The front drive axle was also sourced there, with the Dana 44 (which was specially designed because of its required length) proving the most suitable for the Overlander project. After finding the standard Holden rear axle unsuitable, a specially made Dana 60 axle was also imported. A number of running components also had to be made to suit the track of the Overlander.

The front and rear propeller shafts were manufactured in America, with the result being that the Overlander had one of the strongest rear assemblies of any vehicle.

Production of the Holden 4x4 Overlander

Haywood gained plenty of publicity demonstrating the Overlander HJ Utility in the Simpson Desert in 1976.

Starting with a Holden utility, the existing sub frame and front cross member was modified to accept a new front drive axle and leaf springs. An additional cross member was added to carry the transfer case. Front disc brakes were used with rear drums.

A standard Holden rear axle and differential was used, with springs mounted under the axle, with double-acting shocks to provide extra ground clearance.

A high and low range transfer case and front axle were imported from the USA, with the Overlander providing either 4WD or 2WD front wheel drive.

Powering the Overlander was Holden's 5-litre V8, with T-bar 3 speed Hydramatic transmission, and rear limited slip differential. 10 x 15 National XT Commando tyres were fitted as an all conditions compromise tyre, as was a custom-made bullbar, and heavy-duty suspension. Inside air conditioning and power steering were standard. There were bucket seats and carpeting, and instrumentation included speedo, clock, tachometer and gauges for water temperature, battery charge, oil pressure and fuel.

Whereas Holden had aimed at producing a multipurpose vehicle, Haywood aimed to produce an affordable luxury 4WD, in the mould of the Range Rover.

He was to progress from commercials to Kingwood station wagon 4WD conversions. The unit performed quite well off road, with its biggest drawbacks being the length of its bonnet, and its large turning circle.

The Overlander carried two compliance plates (Haywood's and the original Holden plate) and met ADRs on emission control. Only 50 Overlanders were planned for production per year, due to licensing agreements. Standard Holden components remained covered by the Holden warranty.

By early 1978, 34 Holden Overlanders were in service in Australia, in utility and panel van configurations. Haywood's company was producing two vehicles a week, with a capacity of seven. The station wagon at this stage was unable to be converted to 4WD due to an unsuitable chassis construction.

Holden Overlanders were supplied to customers as new vehicles after undergoing modification. A three foot long, three quarter inch thick chassis plate was added from a point midway along the door, through to the old rear mount of the front lower wishbone. This was welded and provided a location point for the fixed rear mount for the new semi elliptical front springs. Shackle hangers were added as part of a new box-section front cross member.

A Turbo 400 auto and two speed Dana M20 transfer case were joined and fitted as a single unit straight into the car. The rear tailshaft ran straight through the centreline of the vehicle, with the front tailshaft offset slightly to the right. The front axle was a purpose built universally jointed Dana 44, mounted on short semi-elliptic leaf springs.

The uprated axle gave a 75 percent gain over the standard axle, with a 62-inch track. The rear tailshaft was centre-mounted, rather than off set, similar to the early model GM Blazer design. Free wheeling hubs were standard equipment, as was the second wraparound main leaf on the rear springs.

The Overlander looked imposing, sitting higher off the ground, but also because of its large fibreglass flares. Utilities were fitted with a deck-mounted double roll bar, and a bullbar was also standard. The interior was standard Holden with the exception of the two levers mounted in a centre console. These were used to select two and four-wheel drive, and high and low ratio.

An Overlander could be constructed in a day and a quarter, but production never reached this level mainly due to government red tape and refusal by the Customs Department to waive import duty on the Dana components, although there was nothing similar available in Australia. The recommended retail price from the factory was $13,500.

The Holden station wagon was originally considered unsuitable for conversion to 4WD. Haywood received a number of requests for it and finally in April 1978 a prototype 4WD station wagon was available. Originally it was not a priority as it was necessary to first get the commercial models up and running, and compliance from all Australian states for them.

The Overlander station wagon included more refinements than the utility and panel vans and was priced at less than $20,000 in 1979. It was fitted with 10R15LT radial All Terrain TA Goodrich tyres which gave a better ride than the original Commandos.

The Overlander was covered by the Holden warranty, with all other items covered by Haywood's warranty. This included a 50,000 km warranty on heavy-duty axles, both propeller shafts and the crown wheel and pinion differential assembly.

A personalised option system was introduced, with a number of models available between $15,000 and $20,000. Options included tinted windows, power lift rear window, 'Kingswood' trim and choice of wheels. It was available in panel van, utility, station wagon and one-tonner cab/chassis configurations.

Over a three-year production period around 80 Overlanders were produced, despite the capacity to turn out many more. Ill health forced Haywood to close down operations for some time, but he recommenced production in 1982, concentrating on Overlander station wagons. The last of these was built in 1989.

During the 14 year production run the Launceston factory produced 120 Overlander 4WDs, many of which are still running trouble-free today. 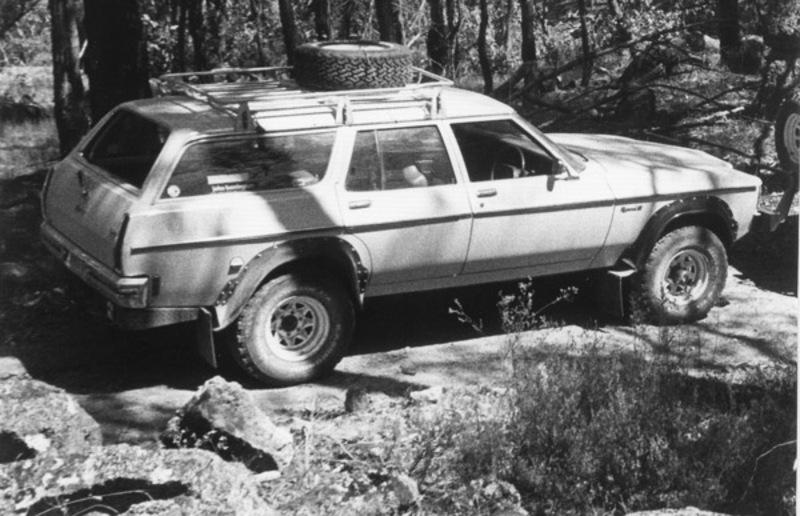 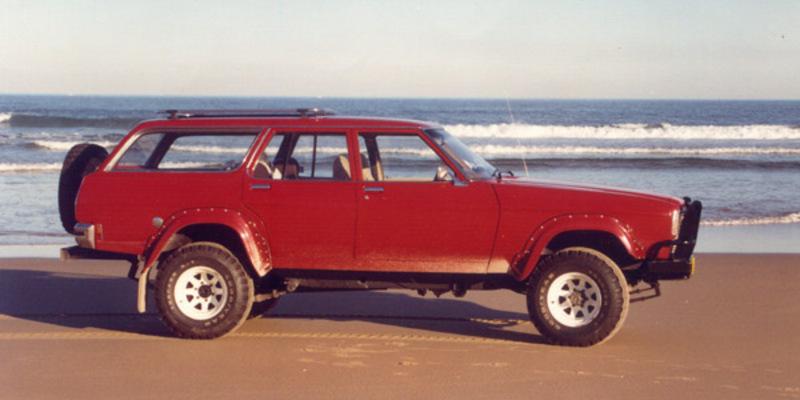 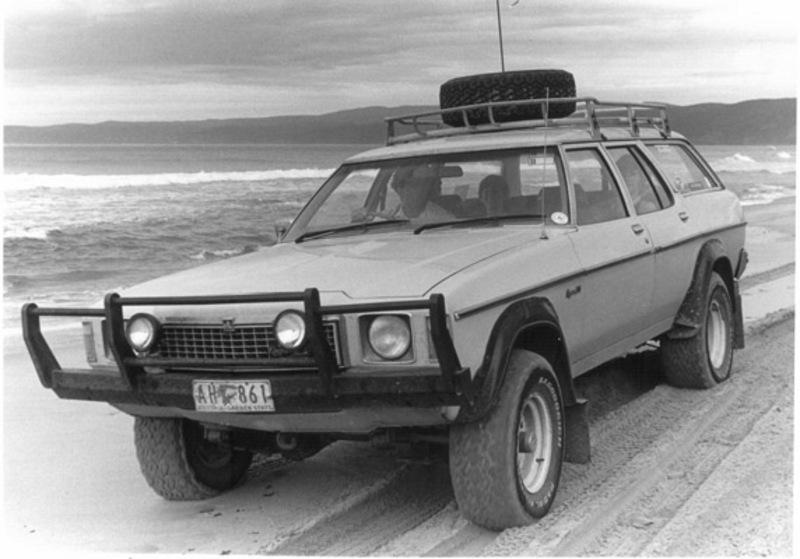