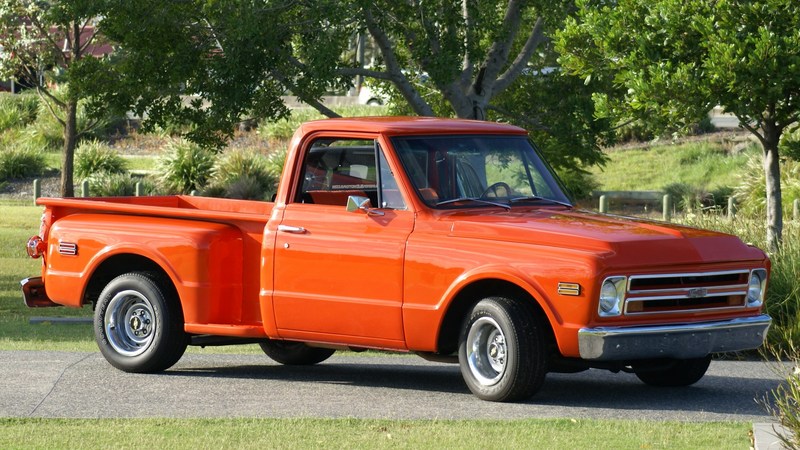 In fact, by the late 1960s, Chevrolet's truck range had consistently outsold Ford's for more than three decades
While probably not as well known as Ford's F-Series light duty trucks, Chevrolet's C-Series were part of an overall range that was significantly more successful.

In fact, by the late 1960s, Chevrolet's truck range had consistently outsold Ford's for more than three decades. From 1938 to 1967, Chevrolet was the undisputed sales leader in the US truck market. As well as the "light duty" pickups up to one ton, this included buses and large trucks that are outside the scope of JUST CARS.

On the back of this sales success, Chevrolet also celebrated a milestone in 1968 - 50 continuous years of truck production. From a mere three models in 1918, there were a staggering 464 different variations for the Chev truck buyer to choose from in '68. Within this extensive range, the volume sellers were the "light duty" pickups, which comprised the C10, C20 and C30 models of ½, ¾ and 1 ton capacity respectively. Of these, the C10 was far and away the most popular model, available in two different pickup bed lengths (with stepside or fleetside beds), a panel van and passenger-oriented 'Suburban' model, as well as a cab/chassis model for custom bodies. Additionally, the C10 and C20 were available with four wheel drive, this variant identified by a 'K' instead of 'C' prefix.

While the C Series started in 1960, the C10 didn't become a standardised and recognised model name until 1967. In that year, a new look across the light duty pickup range was unveiled, replacing the "two level" appearance of the front end and distinctive waistline crease with a smoother, more modern look. Bevelled edges on the bonnet and a revised, more subtle body crease ran along the lower third, continuing over the wheelarches to create subtle flares. This was continued in the styling of both the fleetside and stepside rears. The bluff-front grille was identified by two broad horizontal openings, which were trimmed in chrome, flanked by circular headlights in square chrome bezels. The bowtie logo was positioned in the centre of the grille, with 'CHEVROLET' spelt out across the bonnet's leading edge. In what had become standard practice for most pickup trucks, 'CHEVROLET' was also stamped into the tailgate. Model identification consisted of a bowtie logo above the 'number' (in this case being '10') on the front guards aft of the wheelarches. This was the only way to pick a C10 from the heavier-duty C20, as both were available on a 127-inch wheelbase.

As the C Series had been totally redesigned for 1967, there wasn't a lot of change on the 1968 models. Externally, the only notable addition was side indicator lights, fitted front and rear, and a larger rear window. The front end came in for a minor change, with more bright metal trim around the grille and headlights. The 115 and 127-inch wheelbase variants were continued from 1967, equating to pickup bed lengths of 6.5 and 8 feet respectively. The floor of each was in timber, with recessed metal skid strips to make loading easier. The tailgate was unchanged, secured with latches designed to prevent rattling, while the chains that held the tailgate in the 'open' position were rubber-sheathed to prevent paint damage. On basic C10s, there was no rear bumper, and the front bumper was painted, not chromed. Front and rear chrome bumpers were optional extras, as was a chrome-edged rubstrip that ran low along the full body length, looping up to follow the line of the wheelarches. The grille, windscreen surround, cab interior and steering wheel could be ordered with full chrome trim as part of a 'Custom Chrome' option package.

In order to comply with US Government safety regulations, seat belts and rear view mirrors were fitted as standard to all Chevy pickups from 1968, while switches and interior trim were required to be "blunt" to avoid injuring occupants in collisions. Interior options included the usual upgrades to trim, seating, instruments, insulation, etc., as well as "luxuries" like air conditioning, tint glass, and a passenger-side door lock. These became more and more popular throughout the 60s, as pickups evolved from "work" into "play" vehicles. Some of these were combined in packages, with one of the rarest being the 'Custom Sport Truck' (CST) option. The CST package, which had debuted the year before, was fitted to only around four percent of 1968 C10 production. The package included chrome bumpers, 'CST' badges on the doors, additional insulation and underbody coating, floor carpeting, chrome pedal trim, chrome-trimmed dash knobs, passenger-side sunvisor, and a full-width 'Western' seat. This was essentially a pair of buckets with a middle seat that could be folded down to create a centre armrest, or up to reveal an underseat storage compartment.

C10s could be ordered in fifteen different colours for 1968, including exotic-sounding 'Clematis Blue' and 'Saddle Pony', with a two-tone option (only white was available as the second colour) for the top and rear section of the cab. Additionally, as a one-year-only option for 1968 to celebrate Chevrolet's 50th year of truck production, a special gold & white colour scheme was also available. This comprised white for the lower sill, grille surround and roof sections, with gold everywhere else. When combined with the CST package, this made for a very attractive vehicle.

In addition to looks and comfort, performance became a factor for the pickup truck buyer in the late 1960s, too. With the growing popularity of V8s in cars, it was inevitable that the same trend would work its way into trucks. In the case of the light duty Chevys, the difference between and six and V8-equipped models had been steadily narrowing since the early 1960s, with 1968 marking the first year that V8-equipped models actually outsold those with six cylinder engines. A 250ci inline six-cylinder was the standard engine offered across the C10 for 1968, with options of a 292ci six, 307ci V8, or 327ci V8. The largest engine in the light duty range for '68 was the 396, but this was only available on SS-spec El Caminos. The standard C10 transmission was a column-change 3-speed manual, with a heavy-duty Borg-Warner 3-speed available as an option.

The growth of the pickup truck market saw almost 400,000 C10s produced for 1968, so they're not exactly rare vehicles, but they are uncommon in this country, certainly moreso than a Ford F Series from the same era. Even Chevy El Caminos are easier to come by. As such, it can be hard to track down a good example. In terms of appearance, the C10's chunky, purposeful styling presents well, with enough curves and angles so it doesn't look like a box on wheels! Modified "street trucks" with bigger V8s, custom interiors and larger wheels and tyres can be real eye-catchers, especially with the stepside rear, which is still something of novelty in Australia. With the running gear and mechanicals being GM, parts shouldn't be a problem. The panels and badging unique to the C10s will be harder to track down here, but pickups of this era are well-supported in the US, so most C10-specific parts should be able to be sourced there. So if you want a classic American pickup for street or business use that ISN'T a Ford, a Chevrolet C10 is worth a look! 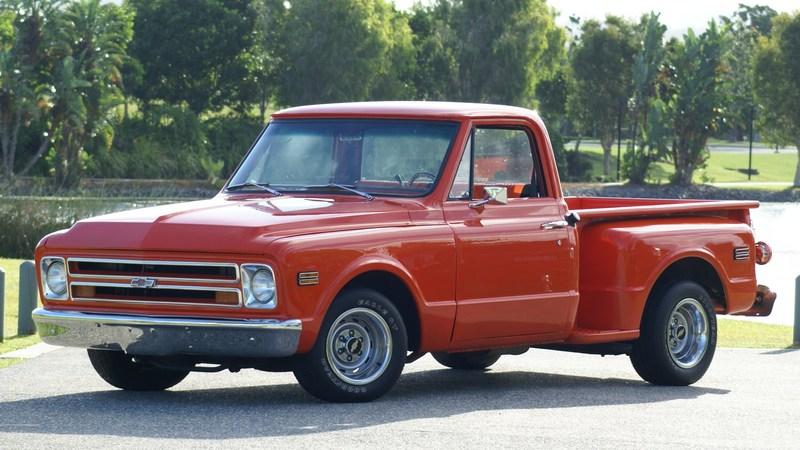 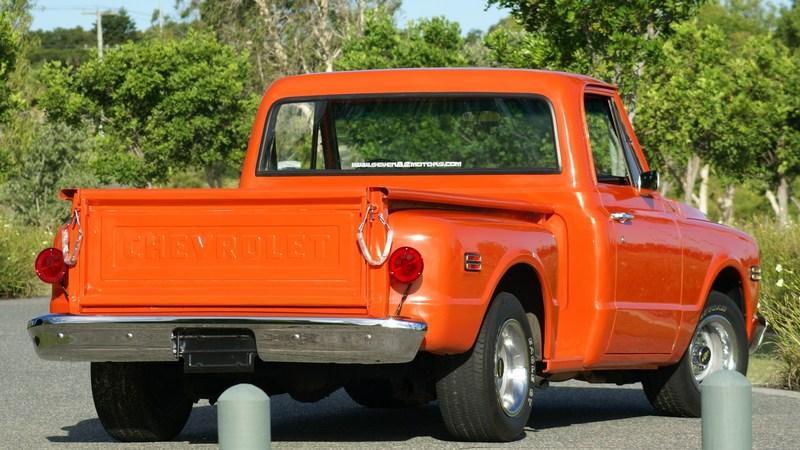 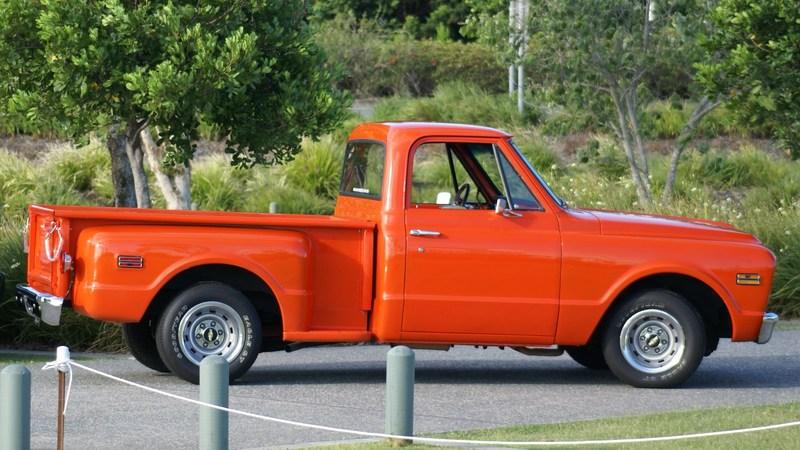