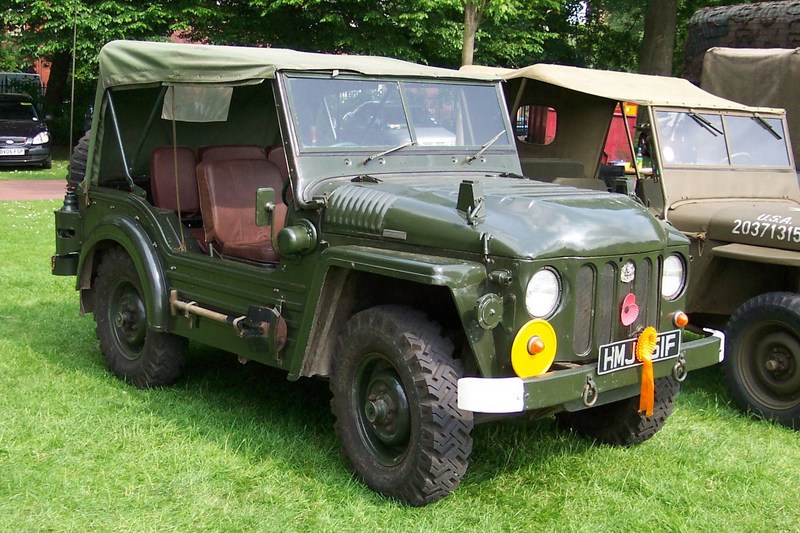 Three prototype 4x2 vehicles were built in 1947 by the Nuttfield Organisation, with the dubious name of the 'Nuttfield Gutty'. Testing proved its shortcomings and the project was advanced by a government body known as the Fighting Vehicle Research and Development Establishment. The new vehicle became known as the Project Car 4x4 cwt FV1800-series. They in turn became known as the CT (Combat Truck) range of vehicles, with a 4x4 prototype built by Austin (the Champ), another by Humber, and a third built by Leyland, named the Martian.

The next prototype in Britain's search for its own Jeep was the Wolseley Mudlark, with Wolseley awarded a contract to built 12 in August 1948. It was extensively tested by the US, but was found to have serious shortcomings in the suspension, axle and lubrication system.

Finally, in 1950/51 Austin presented a vehicle that was superior to the Mudlark in most regards - particularly looks - as evaluated by the military. They were the prototype to the final Champ, with the production model featuring a number of modifications to these first vehicles.

Perhaps its most significant feature was its fully independent suspension, with longitudinal torsion bar springs and telescopic shock absorbers. The suspension was designed by Alex Isigonis, who later went on to design the revolutionary Mini Minor. The Champ had a tough box chassis with the front and rear differentials mounted on the chassis. A 4-cylinder 2.5-litre B40 Rolls Royce engine powered it. The suspension allowed the Champ to be driven up to 40mph over rough terrain, with a maximum speed of 65mph. It had a 5-speed all synchromesh gearbox with all speeds also operating in reverse. Four-wheel drive was optional and was achieved by connecting the front and rear differentials by a propeller shaft running the length of the chassis.

Austin were awarded a contract to built 15,000 vehicles, with half of the contract being cargo trucks and the remainder fitted with generators and communications gear.

The Champ was designed to allow key components to be removed as a single replaceable unit. For example, the engine and gearbox formed one unit, and the axles contained all the suspension parts for removal together.

The engine and all electrical items (24-volt system) were waterproofed so that the Champ could wade to be virtually fully submerged to a depth of 2 metres with little preparation as long as its snorkel remained above the waterline. The body was utilitarian, composed of welded and pressed steel panels, similar to the Jeep. The windscreen could fold onto the bonnet and there was seating for four.

A civilian version of the Champ was offered (model WN3) with a choice of Rolls Royce or modified 2660cc engine. About 500 civilian vehicles were built, a number of which came to Australia.

Of the military version, the Australian Army purchased 400 in the mid 1950s.

Production continued until 1955, with about 11,000 Austin Champs manufactured. The Champ is reasonably rare, but faults such as weak rear axles, a dodgy transfer case and other mechanical problems were recurrent, many due largely to its extreme weight.

Today the Champ remains little more than an interesting military vehicle, although there remains a dedicated army of collectors and Austin Champ owners clubs worldwide.