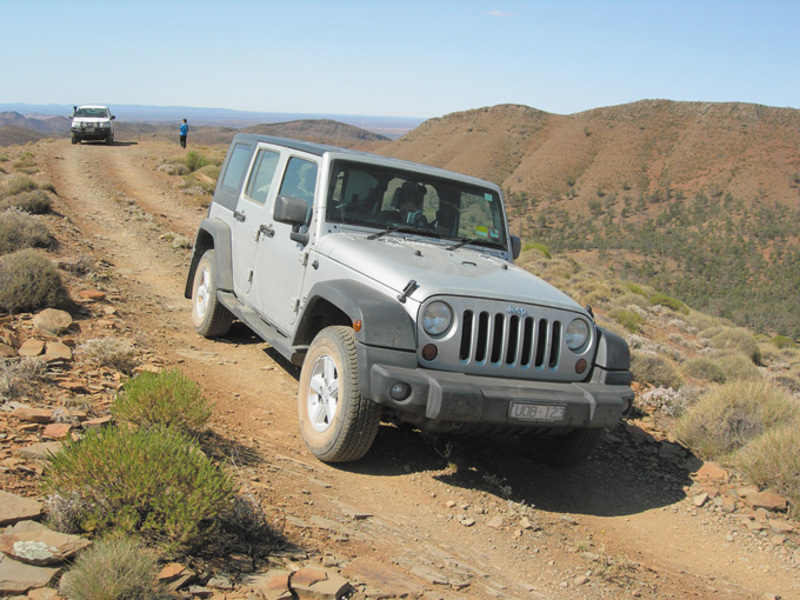 To a four-wheeler it is a rare privilege, as you climb an incredible 921 metres along a rough, rock strewn track that winds its way along steep mountain ridges to finally tackle the pinnacle of the Flinders Ranges - Mt Caernarvon
To spend a day crawling over loose rocks in a four-wheel drive to travel just 60 or 70 kilometres may not be everyone's idea of a great day out.

To a four-wheeler it is a rare privilege, as you climb an incredible 921 metres along a rough, rock strewn track that winds its way along steep mountain ridges to finally tackle the pinnacle of the Flinders Ranges - Mt Caernarvon. This trip is the incredible Skytrek - a six hour drive - that is located on Willow Springs Station, approximately an hour's drive from Wilpena Pound in South Australia. Willow Springs, and the Skytrek track, are both private property, so visitors are required to pay $50 for the privilege of a day drive that loops around the station. Visitors are welcomed at the station with bush camping available along a dry (on this occasion) creek bed that is still incredibly beautiful, or you can stay in station huts that have been converted to accommodate visitors.

About Skytrek
Skytrek consists of a series of station roads, old mining and goat shooters tracks and a firebreak, linked together by 26km of constructed track over Mt Caernarvon to complete the circular route. The track over Mt Caernarvon is the highlight of the trek as it clings to the ridge tops, providing an exhilirating driving experience and first class views. The track took 51 dozer hours to compete the 26km and Skytrek was opened as a tourist destination in June, 1995.

About Willow Springs Station
While the drive is the highlight of the outing, Willow Springs also provides a delightful insight, especially for those who would like to see a working sheep station in action. The Reynolds family have been associated with Willow Springs since 1924 and the Upalinna block was one of many subdivisions of the former Wilpena Station. Willow Springs Station was one of the early pastoral leases in the Flinders Ranges and was purchased by the Reynolds family in 1952. It was originally known as Appealinna and taken up in 1856. Willow Springs remains a pastoral lease of 28,300 hectares (283 square kms). Its carrying capacity is about 1 sheep to every 16 acres. Along with cattle and sheep grazing the Reynolds family diversified into the tourist industry by developing the shearers quarters as alternative accommodation. Skytrek 4WD tour was opened in 1995.

Tackling Skytrek
Skytrek is not for the faint hearted, offering sections of genuinely challenging low range four-wheel driving. It requires a fair dinkum 4WD - that is one equipped with low range - as opposed to an all-wheel drive variant. We chose to drive Skytrek (and tour much of the Flinders Ranges) in the latest Jeep Wrangler Unlimited. The JK Wrangler was released in 2007 and features a host of new features, not the least being the availability of a turbo diesel engine and a long wheelbase four-door model. For our trip, we drove the 3.8-litre petrol V6 powered Sport model.

The Wrangler has long been an exceedingly tough off road vehicle, but in short wheelbase form has limited touring capability. The four-door model has changed all this and, after completing several thousand kilometres of touring, I can say the Wrangler Unlimited fitted the bill admirably. The Wrangler boasts a 99mm wider track, which may not sound much, but delivers a brilliant feeling of stability, even when ramp angles start to get exciting. It is more capable off road, while on road refinement is a quantum leap forward.

While there is much about the Wrangler Unlimited that is familiar - Jeep have not messed with traditional heritage cues - things that matter have been efficiently upgraded. For instance, seating is far superior, with good back support and while the dash is still relatively agricultural, is well laid out with controls mostly falling to hand intuiatively. The Jeep Unlimited provides customers with both a hardtop that can be removed and a canvas soft top which is fitted inside the hardtop. Open air driving can be experienced with the removal of the hardtop, but unfortunately if you want to leave the hardtop on and remove the fitted soft top, you embark on a difficult process. To remove the soft top is far from easy and so I left it installed, which saw it impinge on cargo area.

The point being however that despite a hinged rear door and flip top glass window, the Wrangler was amazingly dustproof. In a convoy with various other 4x4s, we were in plenty of dust and the Jeep delivered in this department, as well as many others! From the homestead, the trek follows beside a mostly dried up creek to pass the woolshed and meanders on through rocky gorges. There are majestic river gum lined creeks, wild goats and the convoy comes to a stop to admire some aboriginal rock carvings. The Reynolds family have made Skytrek an interesting experience, providing trip notes that are matched to your vehicles trip meter.

There are 40 points of interest along the route, which keeps everyone informed on what they are looking at and explains some of the local history and geography. Much of the first 10kms is along a shaly track which climbs and descends sharply. From there, the track becomes undulating as it passes across plains to old Moxans Hut, which was restored by the Nissan Patrol 4x4 Club in 1993. The track winds through the Little Bunkers Conservation Reserve to enter the Bunkers. This is a privately protected area purchased by the Yellow Footed Rock Wallaby Preservation Society. The Skytrek operators pay a lease fee to traverse across this reserve to access the Skytrek track.

Thirty four kilometres in and drivers are advised to select 4WD and to use low range. The Wrangler is fitted with a well spaced 4-speed auto box and uses the second generation Command-Trac, part time 4WD system. It has been strengthened for this model with additional structural stiffness and sealing, and uses flanged front and rear output shafts mated to velocity joints on the driveshaft replacing sliding yokes to deliver more efficient operation. From Murray's Gully, the trek rapidly climbs. The Jeep crawled up the shale littered track, lurching over large rocks on the way to the highest accessible point in the Flinders Ranges.

As the track narrows, the Jeep feels particularly stable with its wider track and longer wheelbase. The 3.8-litre V6 has ample power and is happy to walk up steep climbs in second gear low range. At the 45 km mark, the Jeep is perched on a ridgeline track with spectacular 360 degree views. While only another 4km along the ridge to the highest point, the drive is slow as the track is very rough. Driver concentration is required here, placing wheels on the highest rocks. The Wrangler has a five-link coil suspension which is a considerable enhancement over its predecessor.

While the vehicle rocks and lurches, the suspension soaks up the majority of the rough ride. The wider track, new shocks and spring arrangement provide a comfortable ride. The final scramble to the trig point on Mount Caernarvon is a slow crawl over some of the worst of the rock. This is no country for pretend 4x4s and the Jeep makes light work of the challenge. From the highest point along the ridge, the climb down commences and throws up many exciting sections for drivers. The track has many narrow sections, with threatening, unfenced long drops on either side.

We pulled up at the homestead some six or so hours after having departed, after a truly fascinating drive. Skytrek throws up plenty of great driving moments for four-wheel drivers and I must admit that the Wrangler Unlimited completed the loop with a minimum of fuss. Seating was supportive and ride quality was fine throughout. Fuel economy rose to around 16L/100 kms on the trek, but considering much of the climb was in low range, this was acceptable. On normal roads the 3.8-litre V6 delivered a tidy sub-10L/100 kms. For the first time, Wrangler offers a wagon that is family capable - able to accommodate five passengers and a decent load.

Options fitted to our test vehicle included the four speed automatic transmission and front mounted side airbags. Priced at $36,990 the Wrangler Unlimited is teriffic value. It is a true 4WD with genuine off-road capability. Unlike previous models, it now delivers greatly improved on road manners and even on the long haul from Melbourne to Adelaide, the only annoying feature was really just wind noise.

As for Skytrek, this is a 4WD treat that anyone visiting the Flinders Ranges should set a day aside for. Consider staying on the property too as it, like the drive, is first rate.
Brian Tanner

Getting there: Willow Springs is located 21km north-east of Wilpena Pound just 3km off the Wilpena to Blinman road, and 71km north-east of Hawker. The last 3 kilometres into the homestead is a narrow, winding track.

Time: Skytrek is approximately 65 kms and takes around 6 hours, so visitors must start before 10.30am

Camping: A limited number of private camping sites are available on Willow Springs Station. They are situated within 2km of the homestead with an amenities block for client use.
Cost is $15 for first 2 persons + $3 for extra person per vehicle per night.
The bush camping sites have a fire ring and BBQ plate. 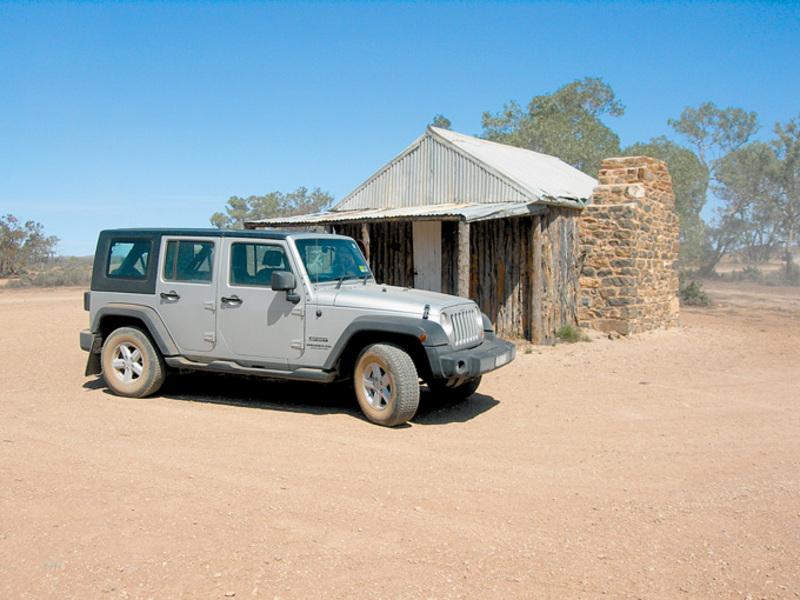 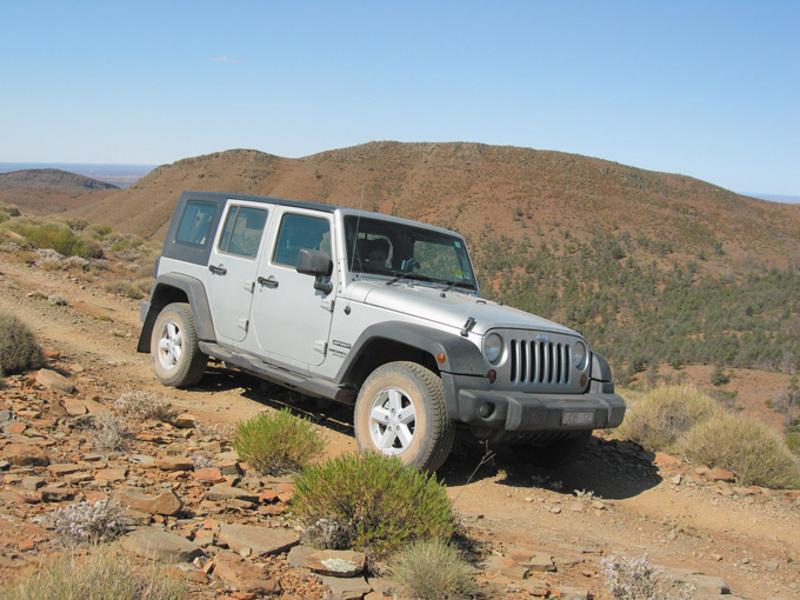 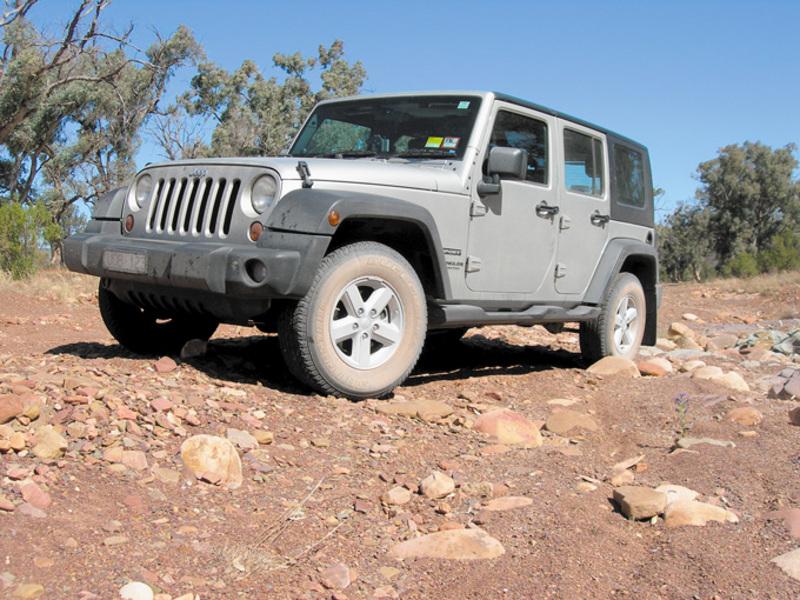