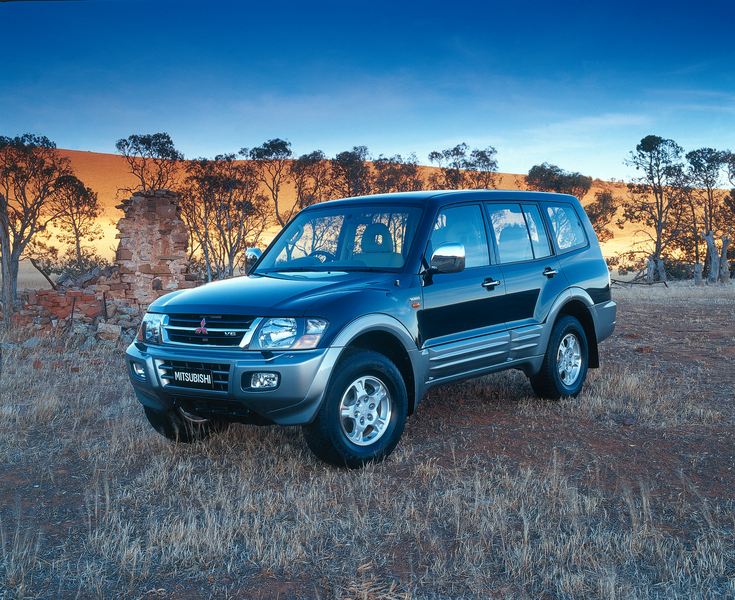 Introduced in 1983, the Pajero opened up the four-wheel drive market to families, and became the suburban 4x4 of choice
The Mitsubishi Pajero is credited with igniting the family four-wheel drive revolution in the early eighties.

Introduced in 1983, the Pajero opened up the four-wheel drive market to families, and became the suburban 4x4 of choice. It was a comfortable, easy to drive wagon people mover, offering all round on and off road ability at a reasonable price. From relatively austere beginnings, the Pajero evolved into a first rate 4x4 and in 2000 Mitsubishi introduced the NM Pajero. The new Pajero pushed the suburban edge further being a more refined and comfortable vehicle. It was longer (up 60mm), wider (up 100mm) and lower (down 35mm) and had a one-piece monocoque body, with fully independent front and rear suspension. The stylish new model was available as a 5-door long wheelbase model with four price classes - GL, GLX, GLS and Exceed.

Two power plants were available - the familiar 3.5-litre V6 that powered the previous model and a 2.8-litre intercooled turbo four-cylinder diesel. Transmission choice was standard 5-speed manual in all models with a new 5-speed intelligent automatic also available with the petrol engine. The NM Series Pajero marked a radical departure from the traditional four-wheel drive ladder-frame chassis, adopting instead a one-piece monocoque body shell with
Integral frame. This increased the vehicle's torsional strength three-fold, increased interior dimensions, and lowered the centre of gravity by 50mm.

The body profile was also lower and more aerodynamic, with a claimed 20mm improvement in ground clearance. The wheelbase increased by 55mm and there were 95mm and 80mm increases in front and rear track respectively, providing a more sure-footed road stance and improved interior comfort. Despite larger overall dimensions the turning circle of the Pajero was also reduced. Mitsubishi also gained significant weight reduction in the NM model by using a new lightweight, high-strength steel sheet in the chassis.

New body and suspension
The monocoque body with its inbuilt frame was the most significant change to the new NM Pajero providing more car-like on-road compliance, and strengthened body for off-road driving. This design also allowed Mitsubishi engineers to introduce a fully independent suspension. Front double wishbones with coil springs replaced the former torsion bar system, while at the rear multi-link suspension replaced the rigid suspension of the previous model.

Four-wheel drive
Mitsubishi's 'Super Select' 4WD system was again improved with the addition of a two-setting constant mesh torque transfer unit, which distributed torque between the front and rear axles. The improved transmission still allowed drivers to engage 4WD on the move at speeds up to 100 km/h, and back to 2WD at any speed. The addition of the torque
transfer unit, which incorporated a centre differential with planetary gears and a viscous coupling unit apportioned torque 33:67 front/rear, split when 4H was engaged. Mitsubishi claimed this ensured safer performance and better high speed cornering. The front differential remained free-wheeling as before.

There were four modes - 2H, 4H, 4HLc and 4LLc - to ensure there is a mode for every driving situation. 4HLc and 4LLc delivered two locked centre-diff modes for off-road traction. With 4HLc engaged a locked centre differential eliminated any speed difference between the front and rear wheels. 4LLc low range 4WD could only be engaged when the vehicle is stationary, and when the centre-diff is locked, sending torque forward, by-passing the VCU. The transfer ratio of 1.900 was almost twice that of the 4HLc mode. This potent low end traction provided excellent off-road mobility in difficult terrain.

The transfer operation for all modes was now easier, as the new SS4-II box featured an electronically controlled transfer lever in place of the previous mechanical one. Consequently, it offered smooth, effortless shifting.
GL models came with 'East Select', a simplified system based on 'Super Select' which had three modes - 2H, 4H (locked high range) and 4 L (locked low range).

For the first time in Australia, Mitsubishi offered a five-speed 'Sports Mode' automatic transmission on NM Pajero GLX, GLS and Exceed models. Using the INVECS II adaptive logic to tailor the transmission's operations to the individual driver's characteristics, the tiptronic-style 'Sports Mode' transmission let drivers enjoy the hands-on control of a manual without the need to operate a clutch. Alternatively, the vehicle could be driven as a normal automatic.
The standard transmission across the range was the proven five-speed manual box.

Inside story
A significantly wider interior offered more shoulder room for occupants, especially for the three second row passengers, while the driver and front passenger both gained extra legroom.
The lower floor height created by the use of the monocoque body allowed greater headroom despite the lower overall vehicle, and it made getting in and out easier, which appealed to traditional suburban customers.
The new Pajero also received a complete interior makeover, with the main instrument cluster featuring individual backlit gauges for speedometer, tachometer, temperature and fuel. The five-speed automatic models also had a shift position indicator. In the centre of the dash is a large module, which houses the RV meter (on GLS and Exceed models), audio and heater controls.

The audio system was an AM/FM single disc CD player, while a six-disc in-dash CD changer was standard on Exceed and optional on GLS models. The CD-changer used a slot-loading mechanism, which was an Australian first for Mitsubishi. Four speakers were fitted to all models, while additional tweeters were mounted on the front doors of Exceed.
The RV meter is an easy-to-read coloured liquid crystal display, which has a clock with date, compass, outside temperature and barometric pressure gauge, altimeter, wheel speed indicator for vehicles fitted with ABS, and service maintenance records.

Pajero continued to offer seating for five people in the GL model, and seven in GLX, GLS and Exceed models. The second row seats were changed to provide better comfort, while built-in gas dampers made it easier to fold the seats forward for increased cargo space or to gain access to the third row seat.
Mitsubishi also came up with a clever idea for the third row seat, which could now be stored in a new under floor compartment so as not to infringe on the cargo area.

Safety
Safety features weren't given the same prominence as they are today with the Pajero wagon offering a driver airbag as standard on all four models. A front passenger airbag was only fitted to the Exceed model, being an option on the other three grades.

Towing
Standard braked towing capacity on all NM Pajero wagons is 2500kg. For unbraked trailers this falls to 750kg. These capacities were equal to the LandCruiser Prado GXL, Holden Jackaroo Monterey and similar to the Jeep Grand Cherokee of the same model year.

Verdict
The NM Pajero is still less than 10 years old and showed that the Japanese car maker could deliver a vehicle with improved comfort and features, yet still hack it in tough 4x4 conditions. It is a station wagon that sits just below LandCruiser and Patrol in terms of size, which is often a good thing in a city environment. The V6 was the pick of the wagons at the time, with 3.5-litres delivering ample power and performance. For those seeking a little more power Mitsubishi did introduce a 3.8-litre V6 to most models in 2003.

The 2.8-litre four cylinder diesel unit was not as refined as some other diesels of the day, and like the upgraded V6, Mitsubishi moved to a 3.2-litre four cylinder turbo-diesel in 2002, which is a real beauty. The five speed transmission was a decent box and Mitsubishis so called 'super select' 4WD system is also a worthy unit. No specific problem have been associated with this model, with buyers really only needing to check things such as evidence of hard off road use, identified by damaged panels and possible underbody damage. Likewise engines should run smoothly and check that gears engage smoothly.

Available as a 5-door wagon, in four price classes there is a NM Pajero to suit most budgets. Recent NM models advertised in Just 4x4s have seen them priced between $14,000 and $19,000 depending on condition and specification.
The NM Pajero is a family friendly four-wheel drive that delivered greatly improved on-road refinement plus lost nothing in the off-road states. 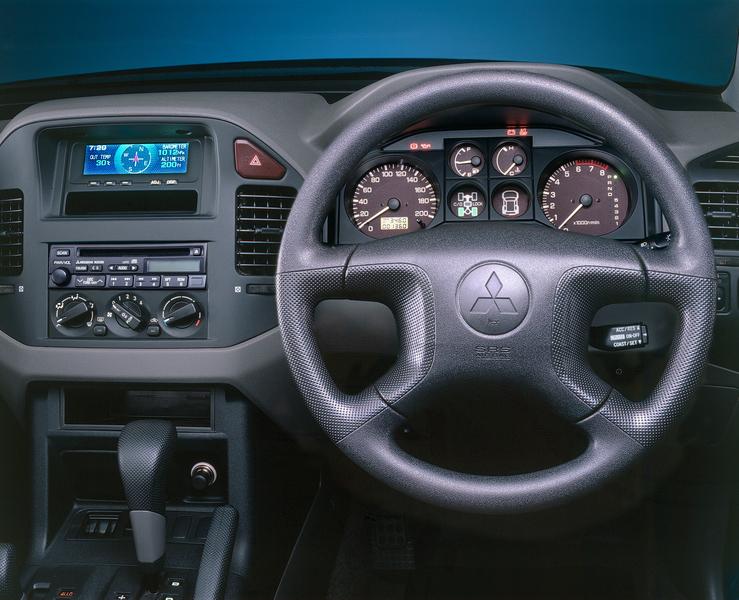 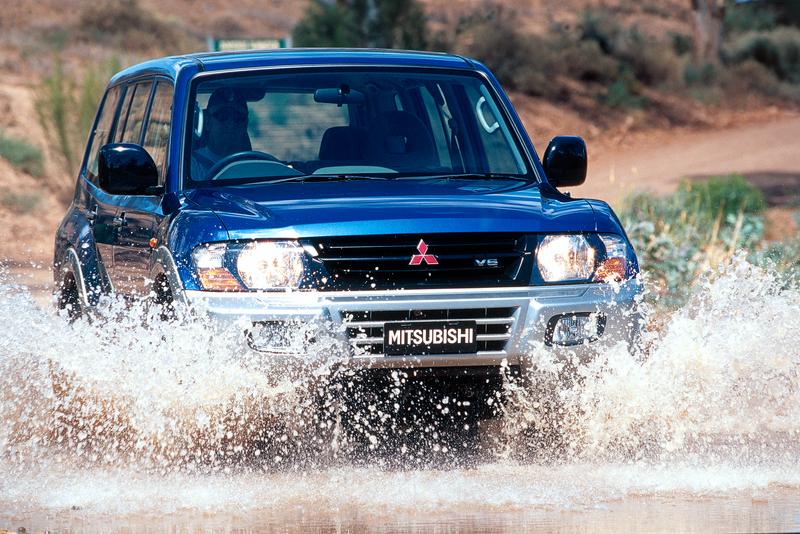 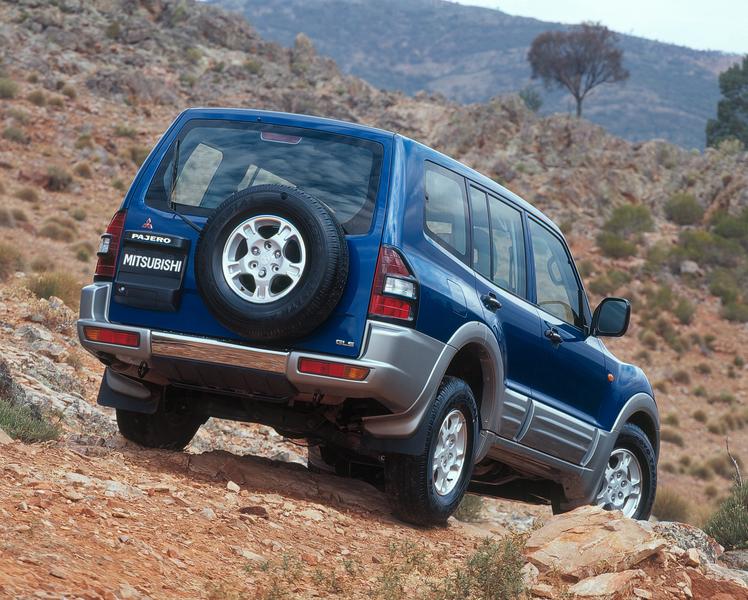 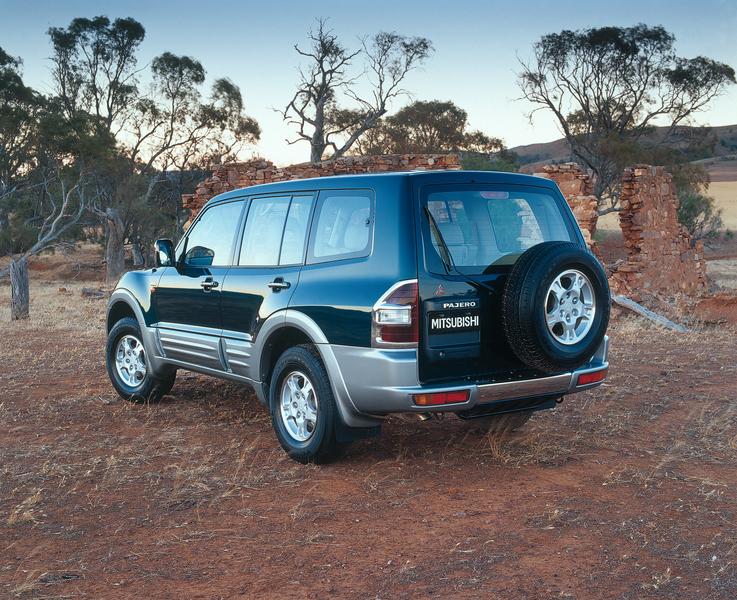