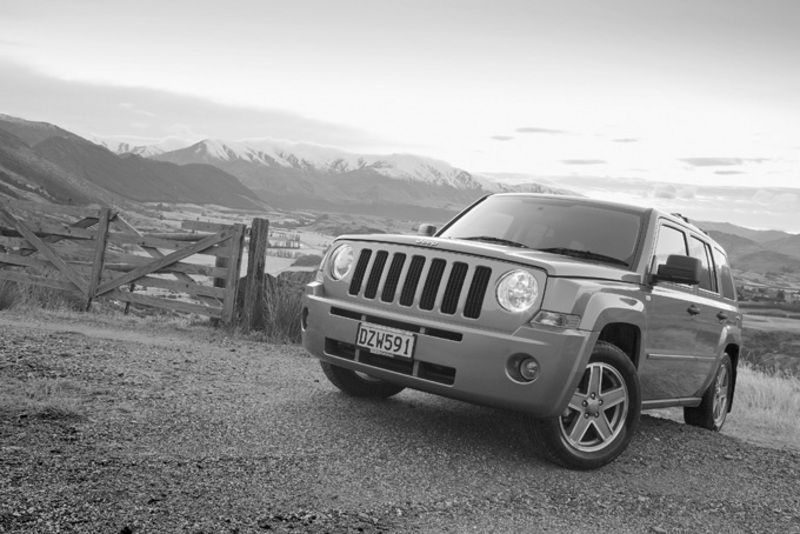 The Patriot is the twin to the Compass, released in March, but externally one would never know, as each vehicle looks totally unrelated and are positioned to appeal to different customers. For more than 50 years Jeeps have been doing what they do best - crawling over rocks and rough terrain - and while it has been a requirement that all Jeep vehicles can conquer the famed Rubicon Trail, they have been missing out on a large chunk of the off road market. Namely the soft roaders, that look like 4x4s, but have limited all-wheel drive or off road ability. Vehicles such as Nissan's X-trail, Toyota's RAV4, Kluger, Honda CRV and others have been laughing all the way to the bank as customers have said they want a vehicle that aspires to 4x4 trekking, but in reality one they never intend to extend beyond the odd dirt road.

Jeep have finally succumbed to market forces and decided to build not one, but two soft road versions, that unfortunately are not Rubicon rated. The immediate question is why introduce two vehicles - Compass and Patriot - into an unproven market for Jeep? Chrysler Group Australia chief Gerry Jenkins said "that people who like something modern, like the Compass. The Patriot is more traditional looking." A little like 'his and her' models, the Compass is skewed towards urban female buyers, while the Patriot is more a 'boys toy', that will appeal to buyers that want the traditional look of a Jeep and will tackle light 4x4 duties. A further incentive is that the Patriot is now the entry point for the Jeep Brand, coming in at $29,990 - some $2,500 less than Compass. Previously the only Jeep around the $30,000 mark was the Wrangler, which while tops in off road situations, has a number of drawbacks for urban travel.

Patriot changes all this, introducing an extremely livable vehicle for urban commuting, with plenty of comforts, and a brilliant arsenal of safety equipment for the price. The Chrysler Group is getting maximum bang for its buck with the Patriot being the third model to use the GS platform that underpins the Dodge Calibre and the Jeep Compass. The styling of Patriot is a little love it or hate it, with a modern interpretation on traditional Jeep styling values. There is the familiar seven slot grille, round headlights, trapezoid wheel arches and there is no mistaking that this is a Jeep. It is designed to appeal to those that want a compact 4x4 along with classic Jeep styling. It has deep side panels and unique front bumper that is different from the US version to comply with local ADRs. The bigger bumper does slightly reduce the approach angle.

Models
The Patriot is available in two models, the Sport and the the Limited with choice of petrol and turbo diesel engines.
Patriot is available with a choice of 2.0-litre DOHC?CRD diesel matched to a 6-speed manual transmission or a 2.4-litre DOHC 16 valve engine standard 5-speed manual, 6-speed manual or CVT auto transmission. The diesel engine produces a modest 103kW of power at 4000rpm and a very usable torque of 310Nm available 1750-2500rpm. The 2.4-litre petrol produces 125kW of power at 6000rpm and 220Nm of torque at 4500rpm. All models are highly specified in regard to safety equipment with standard electronic stability control, ABS and brake assist, traction control and electronic roll mitigation.

Inside story
The Patriot is a practical package with boxy dash that allows easy right or left hand drive production. At launch we drove the Limited model with CVT transmission and 2.4-litre petrol engine. Seating is comfortable and supportive with driver's height adjustment allowing a commanding driving position. The dash is busy and a little untidy, while the transmission selector is located part way up the centre console and falls easy to hand. The interior is a compromise between flexible utilitarian versatility and a bid for car like comfort. Latter features include air conditioning, power locking, tilt adjustable steering, CD?player, leather seats and tinted windscreen.

The Limited also has cruise control (an admission on the Sport model), heated seats and 6-disc CD?changer and audio controls under the steering wheel. Leg and head room is generally good even for back seat passengers. The seats provide a large degree of flexibility with a front passenger seat that folds forward to create a flat surface to accommodate long items. The 60/40 fold flat rear seats feature a useful recline feature and also fold forward to create a large flat cargo area. There are numerous storage areas including twin glove boxes. The interior uses plenty of plastic, which while easy to clean is not particularly inspiring. The cargo area has a removable and washable cargo floor, and under the floor is located a full size spare wheel.

On the road
On normal tarmac and dirt roads the Patriot handles and drives as well as any compact SUV. It has adequate performance and whizzed around town without any problems. Ride and handling are well sorted and body roll is minimal, even when pushed through corners although there is a hint of understeer. The Patriot has a solid ladder chassis and fully independent suspension. Our test vehicle was fitted with CVT - constantly variable transmission - which is not normally a transmission you expect to find in a robust compact off roader. The CVT drives like an automatic, except there are no step changes, with the transmission constantly changing the gear ratios to optimise the engine speed. The 2.4-litre engine is unlikely to set any performance records and its limitations were soon reached on steep hills and moderate off roading when issues of momentum and low down grunt were obvious shortcomings. Acceleration up hills was a chore on occasions.

Off road
We drove the Patriot around Queens- town in New Zealand and tackled the Nevis Road, the highest public road in New Zealand, high up in the snowfields. It was a useful exercise that showed the robust ability of the Patriot, but also highlighted its limitations. First up the negatives. The road tyres, lack of ground clearance and to some extent the transmission were all limiting factors. Notwithstanding, for a crossover vehicle it did remarkably well, considering the road traversed soft, loose snow, mud and some steep ascents and descents. In tackling off road sections the petrol CVT combination left much to be desired, with the manual diesel power Patriot a far more competent vehicle in the same conditions.

There are times when in rough conditions it is extremely frustrating to have an auto that is constantly changing ratios. On one particularly challenging hill climb where momentum was required as the surface was slippery with plenty of mud, yet also littered with rocks, left to its own devices the petrol engine would have soon run out of grunt. Often momentum was the primary method of overcoming obstacles. In the first instance manual selection of 1st gear was the optimum choice, but with road tyres it wasn't an option as the vehicle would lose traction and power half way up. This left the only means being to grab a higher gear and to tackle it at a greater pace.

Admittedly these types of decisions will be rarely considered by Patriot owners as they just won't be tackling such terrain. Similarly when descending slippery tracks, engine compression on the petrol was near non- existent and in a full on brake test, the Jeep needed over half a kilometre to bring the Patriot to a stop from a speed of 20km/h on a long moderate descent. Yes, the Patriot was able to tackle some tough terrain, but its limitations should be recognised. It is more comfortable on harder terrain where issues of wheel slip can be better controlled. In one particular telling example which saw the Jeep straddling some large ruts, to its credit Patriot demonstrated that it could power forward with two diagonal wheels airborne, putting traction through just one wheel.

The Patriot uses Freedom Drive 1 - an active four-wheel drive system - that features a lockable centre coupling. When the centre lock is activated it sends 50:50 torque to both front and rear wheels. It has an electronic coupling mounted to the rear differential which provides near immediate torque transfer. Under normal driving conditions drive is to the front wheels, with heavy acceleration dispensing torque to the rear wheels.

Patriot CRD wagon
I did not have the opportunity to test the CRD powered Patriot in New Zealand so followed up with a run back on home turf. The diesel engine is a direct injection 2.0-litre turbo diesel with high pressure fuel injection, a variable geometry turbo- charger and four valves per cylinder. It produces 103kW of power at 4000rpm and peak torque of 310Nm between 1750-2500rpm. The engine is mated to a six-speed manual transmission. Compared to the 2.4-litre petrol CVT Patriot the diesel is noisier and slower off the mark.

Around town the six speeds has the driver doing a lot of gear changing, but overall it isn't a bad unit, with good highway pulling and certainly its strong torque comes to the fore on hills and in lower gears off road. Off road the diesel is a more familiar unit, performing more predictably than the CVT petrol. It has 178mm of suspension travel and the unibody construction on ladder frame ensures a high degree of rigidity and strength. The ABS system has dual on and off road calibration and the ESP can be turned off for off road traction.

The four wheel drive system is front wheel biased, although according to Kevin Tourneur, senior manager, international product, power transfer takes less than one revolution of the driveshaft. The beauty of this 4x4 system is that it is not dependent on slip, being virtually simultaneous. Tourneur also said that the Freedom Drive 2 4x4 system was not considered for the Australian market as it delivers a slower top speed and wasn't compatible with our modified front protection system requirements. The Patriot has a 33 degree departure angle and a 21 degree approach angle, which is not as good as the US model, again thanks to our different front bumper.

Summary
The Patriot is a useful all rounder that while lacking some of the razzamataz of its competitors does everything that is asked of it. Its on road manners are above average and suspension and handling are well sorted. Both powerplants are adequate, with the CRD the pick if economy and or off road activity is your preference. The CVT 2.4-litre petrol is a great machine in urban situations. Fuel economy for the diesel is a very acceptable 6.7-litre/100km, a figure which I achieved in an 800 km drive.

The Patriot was always designed to be a 4x4 product and the Freedom Drive system works well.
The Patriot provides a genuine alternative for SUV buyers and has a price advantage over the segments major players, with the exception of the Ford Escape, which also starts off at $29,990. Interior presentation is not up to some competitors although interior seating flexibility is good. The Jeep's safety credentials however are first class and Patriot offers all the security that urban families want in running around town.
Brian Tanner 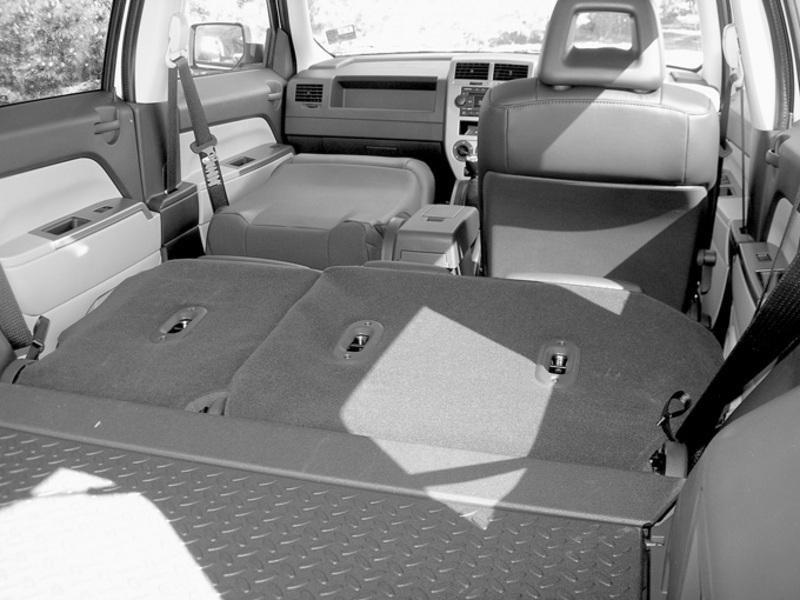 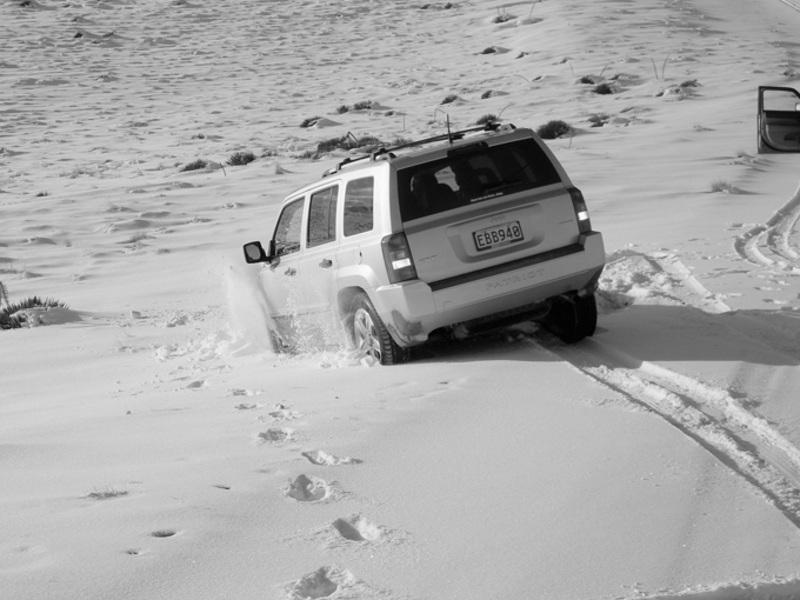 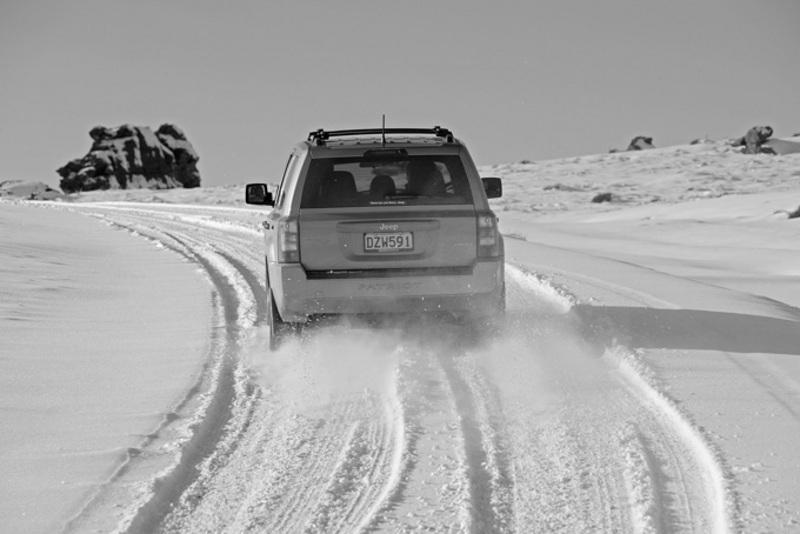