Taking the Wrangler in a new direction - as a people mover - the Overlook concept was one of the star attractions on the Mopar stand at the 2021 SEMA automotive aftermarket industry show in the US. 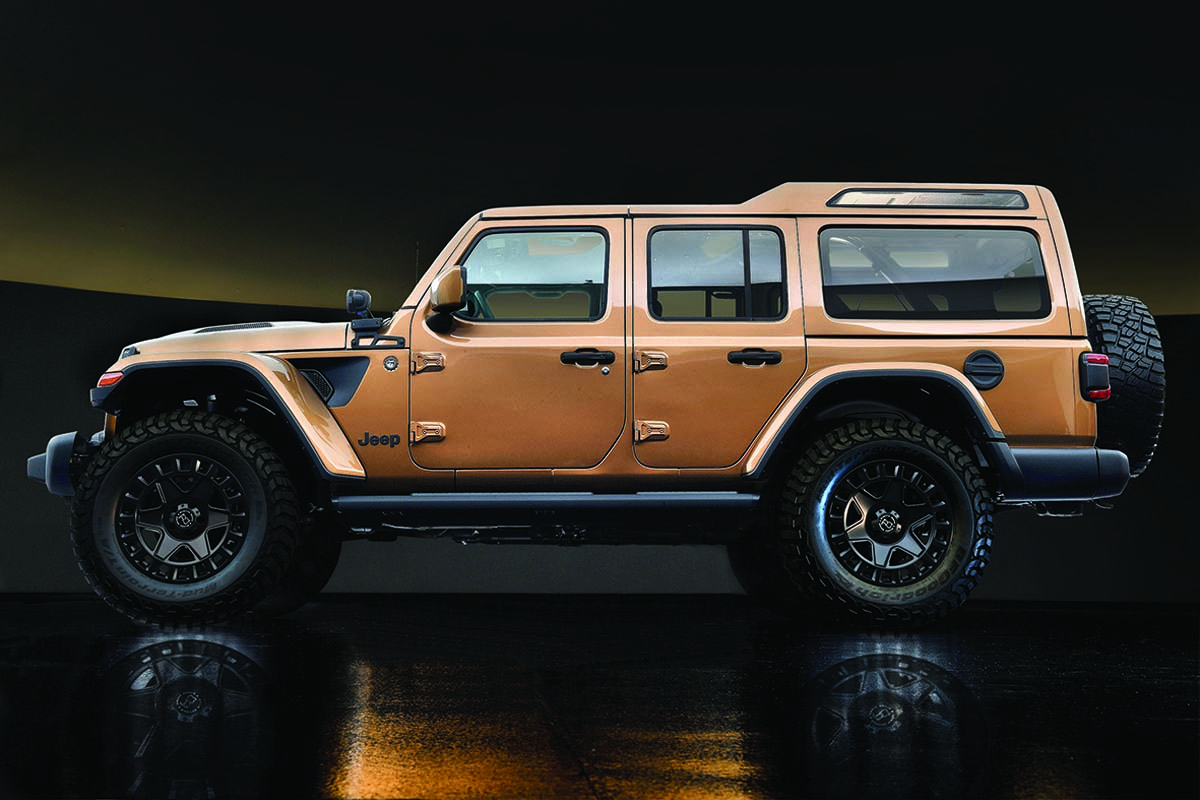 One of seven different concepts that Stellantis North America’s (née FCA/Chrysler) Mopar parts division presented at SEMA, the Wrangler Overlook looked great on the outside, but its most outstanding feature was inside in the form of a third row of seats.

To fit in the third row, the Overlook made no change to the four-door Wrangler Unlimited Sahara’s standard 118.4-inch (3008mm) wheelbase but added an extra twelve inches (305mm) of body length behind the rear wheels. To complement this, a Discovery-style two-step roofline adds an extra five inches (127mm) of headroom for the third-row passengers and also features fixed windows at the front and sides. 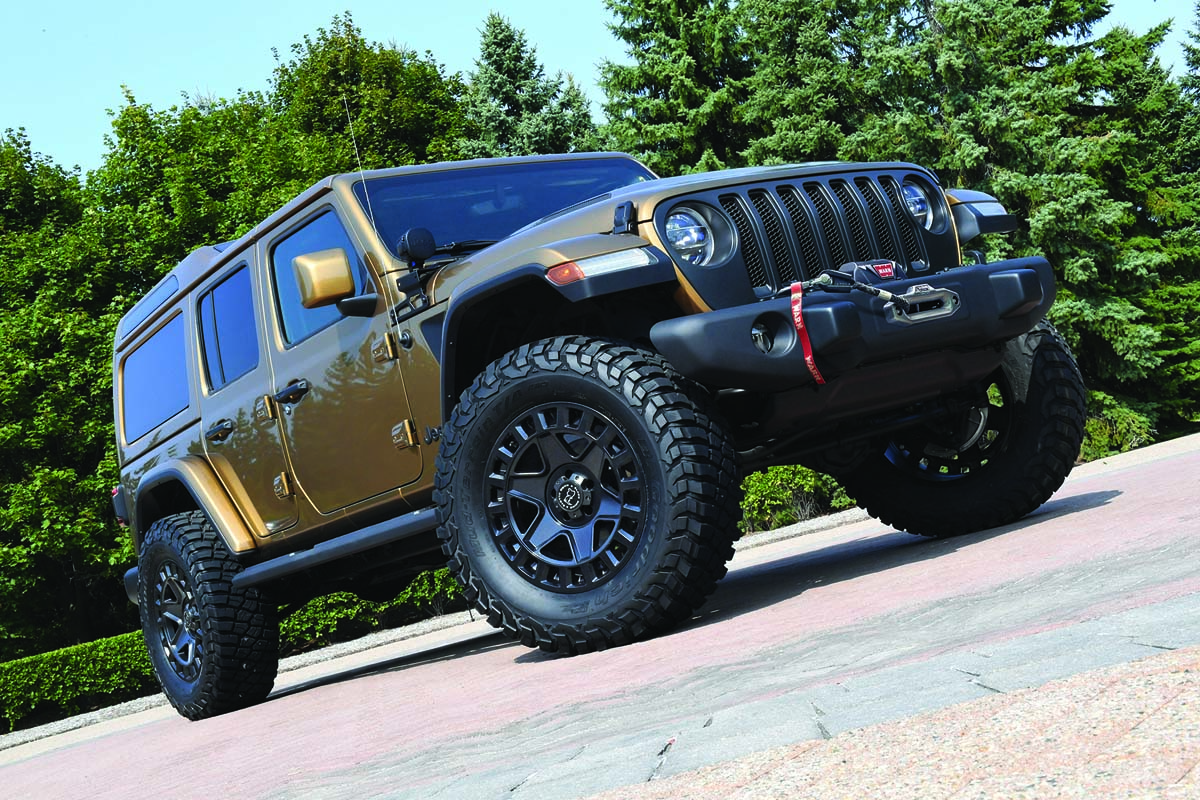 Finished in Sahara Bronze (similar to the Bronze Star shade that Jeep offered a decade ago), the Overlook’s rich metallic paint was complemented by black-painted 20-inch Black Rhino ‘York’ wheels wearing 27-inch BFG tyres. A set of black Jeep Performance Parts (JPP) side steps continued the theme, as did the satin black grille, black Mopar bonnet latches and other exterior details. A set of JPP 5-inch auxiliary lights broke the trend, though, finished in a custom Platinum Chrome instead. 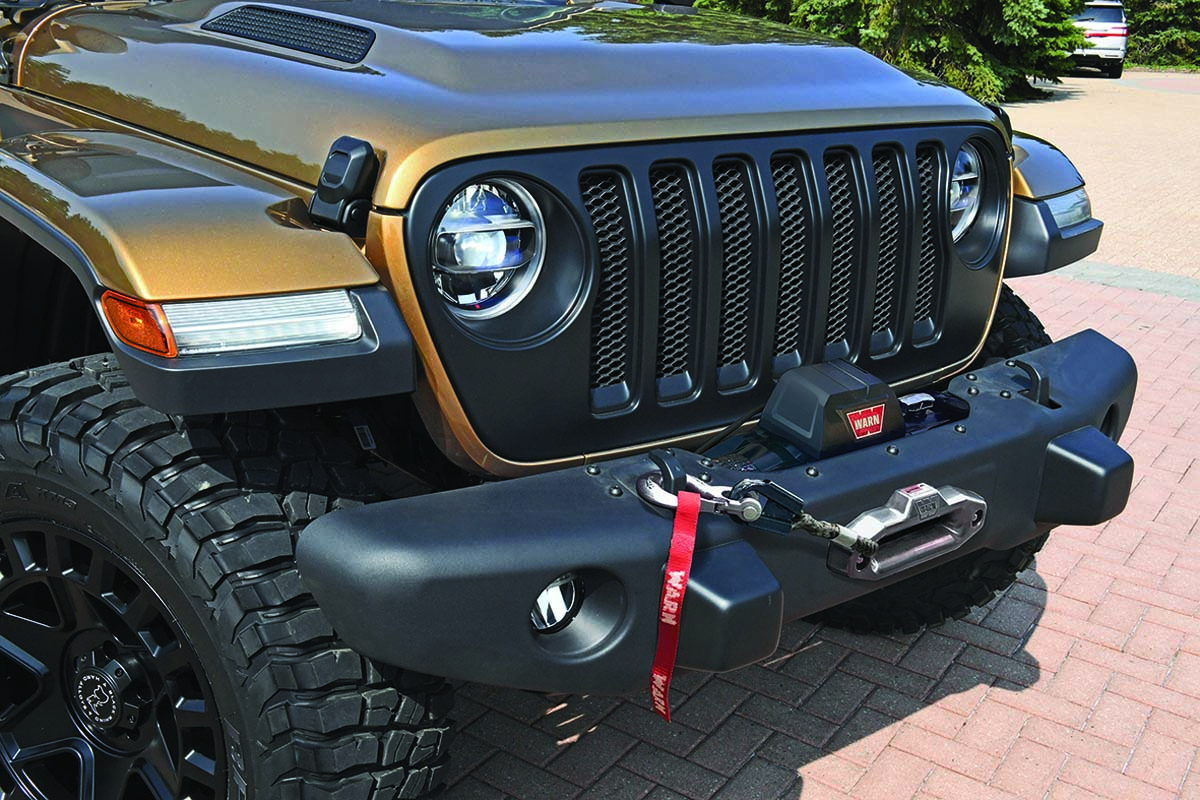 The Overlook’s bumpers were also JPP units, narrower than standard at the front and fitted with integral fog lights and a Warn winch, while the rear bumper added custom wrapround sections to cover the additional body length. 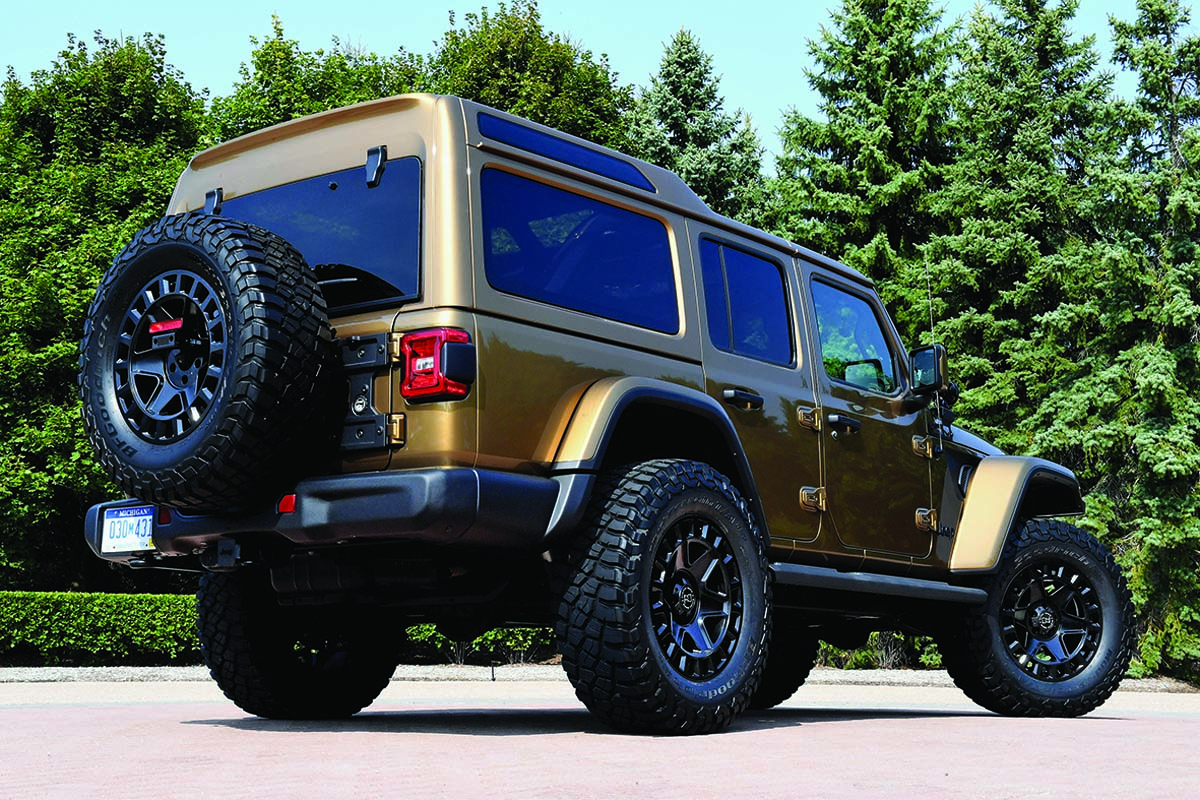 A JPP 2-inch lift kit and Fox shocks were also part of the Overlook concept’s spec, while a tailgate reinforcement system and oversized spare tyre carrier allowed the concept’s 20-inch/27-inch wheel and tyre combo to be mounted. A JPP high-mount stop light was incorporated into this, too. 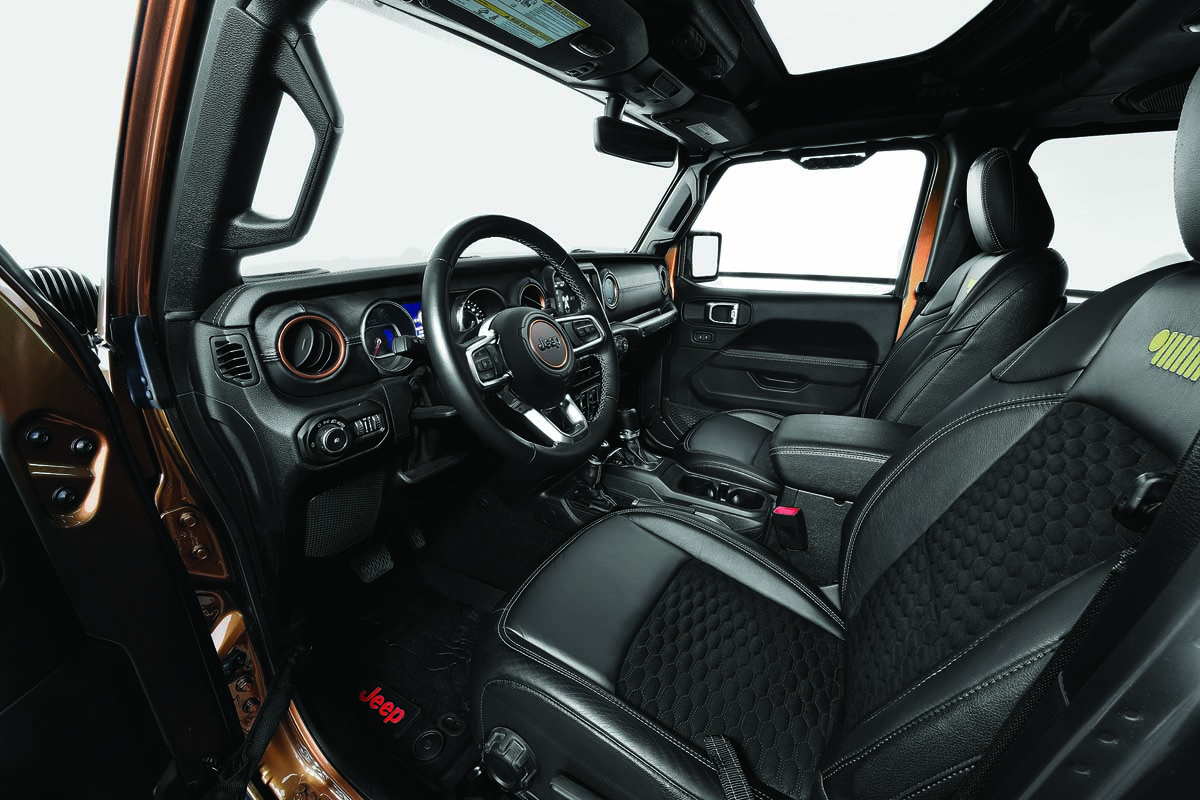 Inside the Overlook concept, all three rows of seats were trimmed in Katzkin black leather and black suede, with leather trim added to the doorcards, steering wheel and dash, with Sahara Bronze contrast stitching used throughout. 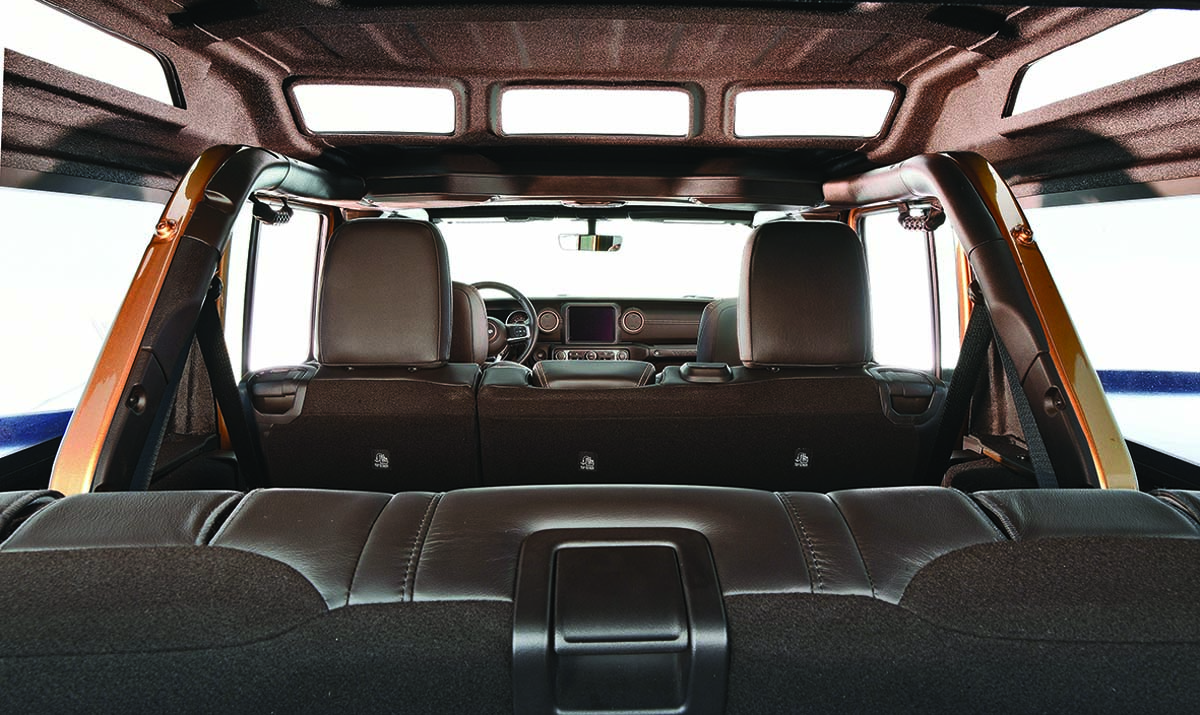 While some of the Mopar creations on show at the 2021 SEMA show, like the Overlook, were pure flights of fancy, others were designed to showcase the customisation possibilities using off-the-shelf cosmetic, mechanical and protective parts from the Mopar and Jeep Performance Parts range.