Looking like something to go to war in, ‘The Chevy Beast’ 4x4 rocked the GM display at SEMA.

Chevrolet provided plenty to get excited about at the 2021 SEMA industry aftermarket show. And while most of their show vehicles were lightly modified and accessorised versions of production pickups and SUVs, ‘The Chevy Beast’ wasn’t – although it left plenty wanting this wild concept to become a production reality! 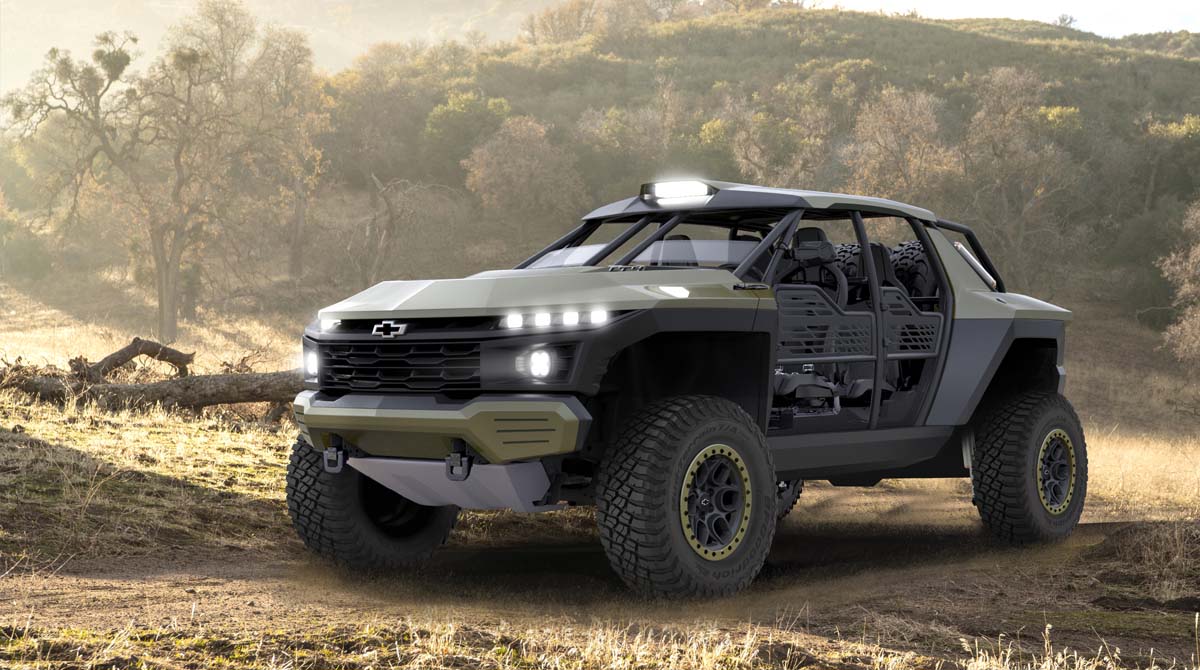 The Chevy Beast, or Beast for short, was created to demonstrate the capability of both Chevrolet trucks and Chevrolet Performance aftermarket components.

“The Chevy Beast concept takes the popularity of high-performance off-road trucks to the next level,” said Jim Campbell, GM U.S. vice president of Performance and Motorsports.

“It’s a vision for a new dimension of Chevrolet Performance capability, from a brand that’s been pioneering performance and supporting customer personalisation for more than 50 years.”

While some have compared it to the ‘warthog’ from videogame HALO, as well as the real-life ‘Infantry Squad Vehicle’ that GM Defense developed from the Colorado for the US military, the Beast has a definite desert racing vibe. That’s no accident, as Chevrolet themselves describe it as being designed to dominate the desert.

“There’s nothing else like The Chevy Beast,” says Jeff Trush, GM program manager, Pace Car and Specialty Show Vehicles. “It delivers a ton of performance and capability, which makes it adept at conquering rough terrain — and it flat-out flies in desert running.”

The base for the Beast is the chassis from a Chevrolet Silverado 1500 pickup, shortened so the overall vehicle length is around the same as a Colorado or Ranger. To this, a custom tubular body structure in 4130 chromoly steel was added, followed by a selection of lightweight, bespoke body panels. 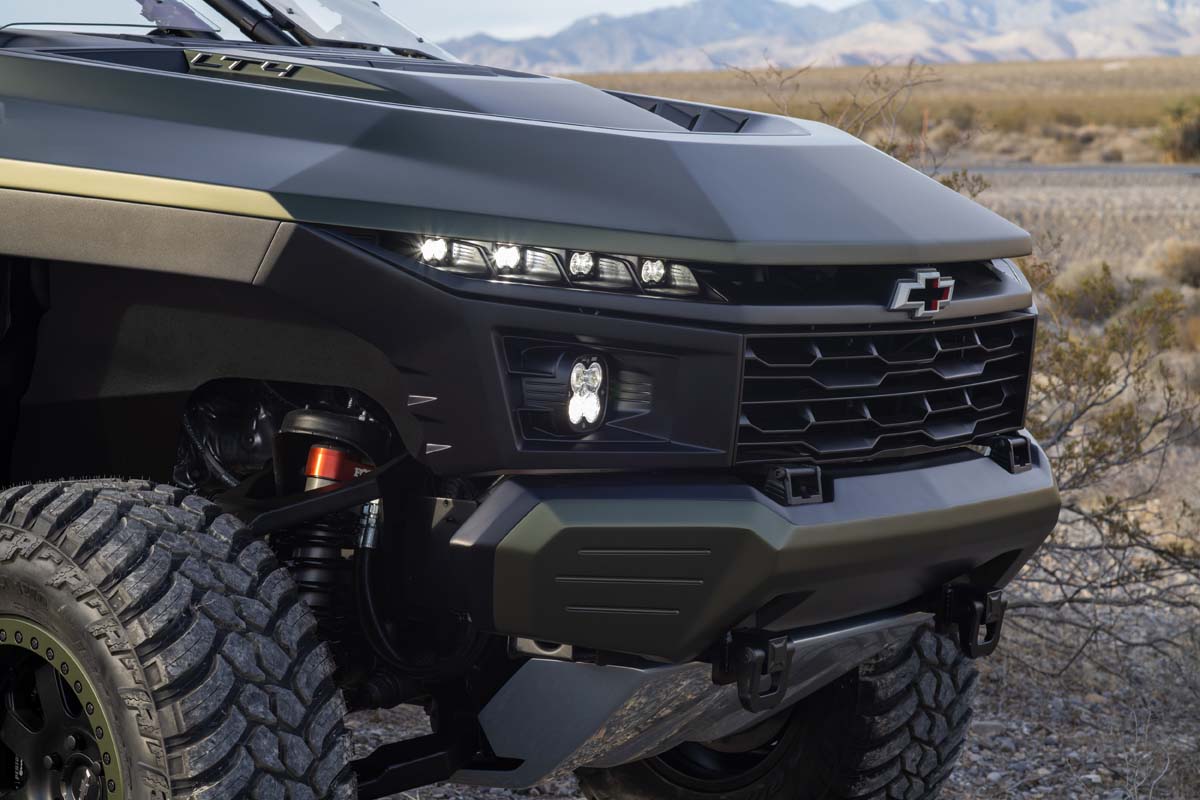 The Beast is very much an open-air vehicle, so those panels are kept to a minimum, with tube half-doors and no glass – aside from front sport screens - adding to the theme.

Like the body panels, the grille is a bespoke item, as are the front and rear bowtie logos, while LED lighting from Baja Designs includes a set in a dedicated roof pod.

For the suspension, Chevrolet engineers developed a concept long-travel package for off-road use that includes concept upper and control arms at the front, a five-link set-up with Panhard rod at the rear and adjustable, remote reservoir Fox shocks all round.

According to Chevy, the package offers stable handling and optimal driver control during high-speed off-road driving, with front travel of 12 inches (305mm) and rear travel of 15.5 inches (394mm).

Ground clearance is 13.5 inches (343mm), while the shortened chassis and limited overhangs front and rear mean the approach, departure and breakover angles are an impressive 45, 46.5 and 35 degrees, respectively.

In the unlikely event of the Beast being hung up or stranded in a gnarly off-road situation, tow shackles are fitted front and rear.

In the Beast, the LT4 is matched to a 10L90 ten-speed automatic transmission, also from the Chevrolet Performance range. 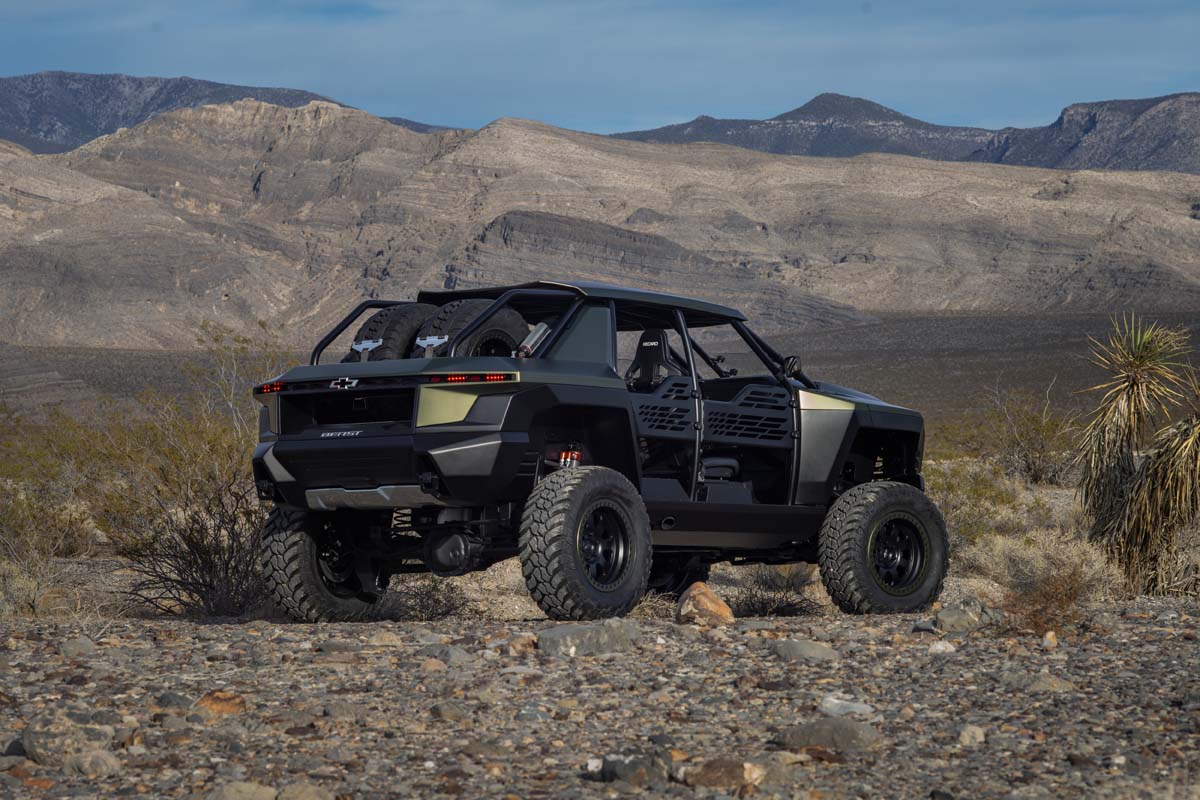 There’s patterned metal flooring front and rear, while behind the seats is just enough space in the truncated Silverado tub to take a pair of those jumbo 37-inch AMP tyres.

The driver grips a steering wheel taken from the latest Chevy Corvette, and while the origin of the console shifter is unknown, it looks like the units seen on older Chevy S-10 pickups.

Instead of an instrument cluster, there’s a pair of AiM 7-inch datalogger-style LCD monitors to display the essentials, including vehicle pitch and roll for extreme off-road situations.

Overall, the Chevy Beast’s cabin is a picture of minimalism, with only a small switchgear panel on the centre console that also holds a handy infographic listing the vehicle’s essential stats.

With more extreme versions of Ford’s F-150 Raptor and RAM TRX coming in the near future, some have predicted the Chevy Beast is a taster for a similarly pumped-up Silverado. While it’s no chance of going to production in its current form, don’t be surprised if some of the features on the Beast are offered on a Chevrolet Performance package for the Silverado in the years to come.