Created to continue Mitsubishi’s winning streak in the Dakar Rally, the Pajero Evolution is a forgotten performance SUV.

Mitsubishi’s record in the annual Dakar Rally is impressive. At time of writing, it’s also unequalled, as Mitsubishi has been the single most successful manufacturer, in the car division, across the event’s 44-year history.

Early wins in the Dakar gave Mitsubishi an appetite for more success, in turn leading to the creation of an homologation special that’s only just starting to be appreciated for the high performance weapon it is. 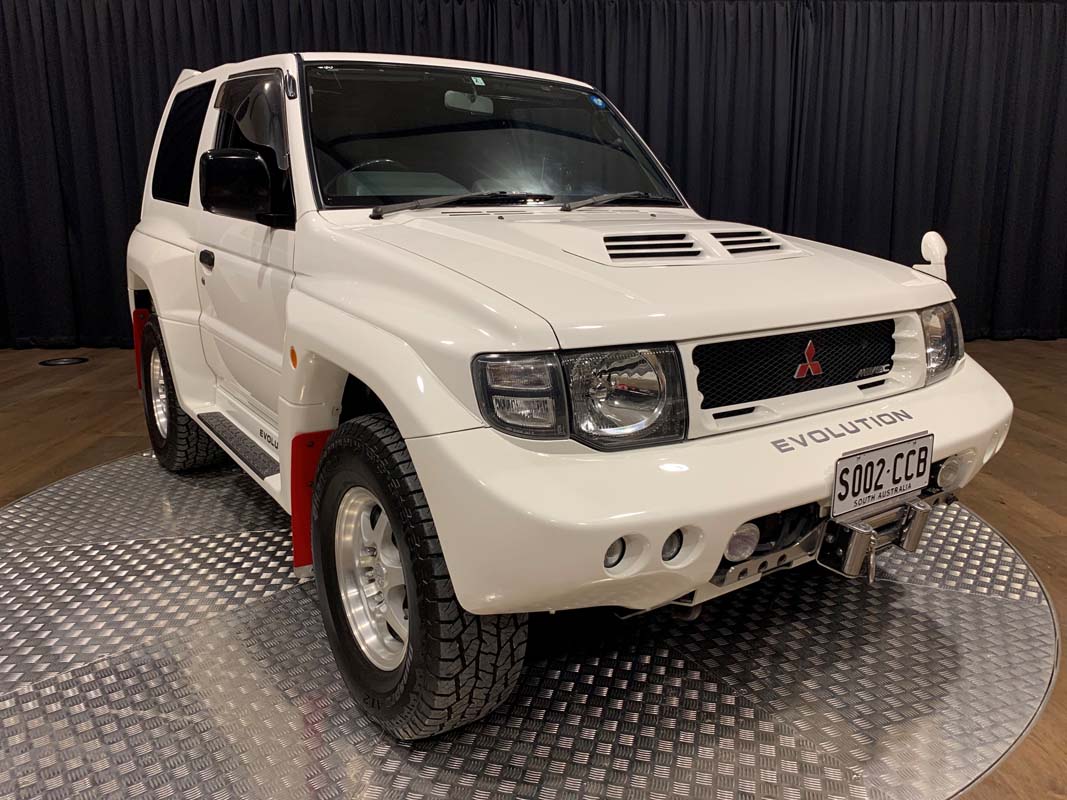 Mitsubishi made its debut in the fifth edition of the Paris-Dakar (as the rally was known back then) in 1983, entering four Pajeros in the Modified Production Class. The Pajero had only been released the year before, so the fortnight-long, 9,200km Dakar was thought to be a good test of the new 4x4’s capabilities.

With each vehicle’s 2.6-litre petrol engine modified in Japan and further preparations conducted in France, the Pajero finished 1-2 in its class debut and eleventh outright in a gruelling rally that saw only 32 per cent of the starting field reach the finish in Senegal. 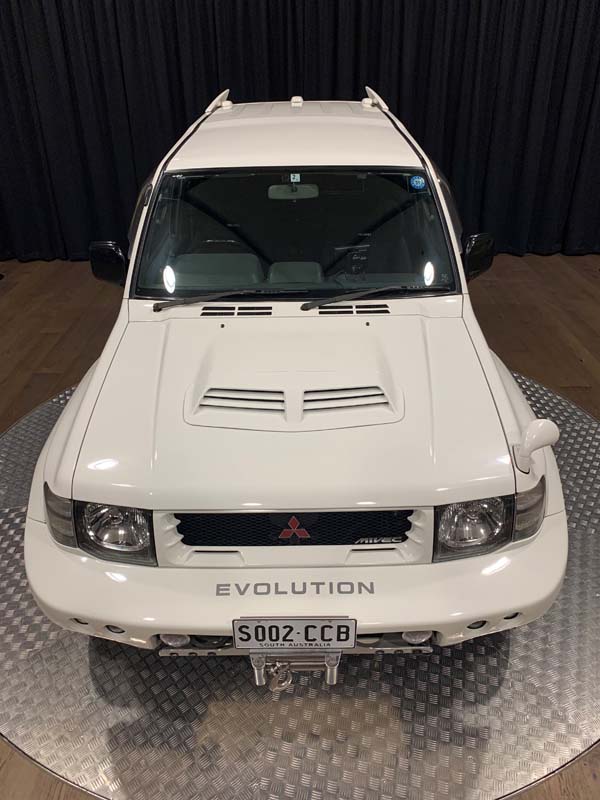 Mitsubishi returned to the Paris-Dakar in 1984 to take another class win, then achieved the outright win in 1985 with a Pajero-based prototype. This was the first victory for a Japanese manufacturer.in the Dakar’s car category, with the factory-backed Pajeros not only finishing first and second overall (Patrick Zaniroli in the lead car, Andrew Cowan the runner-up), but a privately-entered Pajero also won the non-modified Production Car Class that year.

While that 1985 win wouldn’t be repeated in 1986, Mitsubishi remained a force in the Paris-Dakar for the rest of the 1980s, developing their Pajero prototype over and over until taking the outright win again in 1992 – this time in a dominant 1-2-3 finish.

Although victorious again in 1993, the costs of developing the prototypes and campaigning them against stiff competition from other factory entries were weighing heavily on Mitsubishi.

With a ban on turbocharged petrol engines and factory prototypes to come into effect for the 1997 Dakar, it allowed Mitsubishi to look to the production class instead. That change in direction led to the creation of the car featured.

For the 1997 Dakar, the new rules still allowed prototypes, but only from private teams, not manufacturers. This ‘T3’ class was contrasted by ‘T2’ which was for production vehicles with only light modifications.

To compete in T2, Mitsubishi developed a vehicle based in the second-generation SWB Pajero, but with some significant changes from the factory spec.

Those changes started with the chassis, which was now welded to the body for improved rigidity. The front suspension was upgraded from the factory set-up with double wishbones that had previously been developed for the prototype class. The rear suspension was upgraded to an independent multi-link type, with serious amounts of travel built into each end – around 240mm at the front and 270mm at the rear.

Compared to a standard SWB Pajero, the track was widened by 125mm at the front and 110mm at the rear to take wider wheels and tyres. This in turn required substantial wheelarch extensions, which were incorporated into a bodykit that included chunky plastic bumpers designed to improve approach and departure angles, with integral foglights added at the front. There was also a large fresh air scoop in the bonnet and a wild rear spoiler that looked like devil’s horns sprouting out of the C-pillar.

The engine was the same 3.5-litre 24V DOHC V6 with ‘MiVEC’ variable valve timing found in the showroom Pajero, which remained naturally-aspirated to meet the new Dakar rules, but performance was wound up as far as those rules - and engine reliability - would allow. That meant the stock 183kW and 343Nm maximums were improved to 206kW and 347Nm, but there’s speculation that maximum power was closer to 224kW.

The engine was matched to a modified five-speed automatic, with the all-paw componentry including a central locking diff, Torsen LSDs front and rear and the ability to switch from 2WD to 4WD at speed. Completing the package was underbody protection, a roll cage, racing seats and safety gear.

Now, with the exception of the roll cage, seats and essential safety gear, none of these additions would be permitted under Dakar's T2 entry rules. However, if Mitsubishi were to manufacture a production car with all those components, it would be eligible, so that’s exactly what they did, creating the ‘Pajero Evolution’ as an homologation special.

To meet the homologation requirements, a total of 2,500 units were required to be produced and sold to the public. Given Mitsubishi’s past success and the public appetite for all things Dakar, especially in Japan, that total was thought to be easily achievable.

While some may have seen Mitsubishi as exploiting the T2 rules, they were operating within them when Pajero Evolution production got underway in 1997, soon after Kenjiro Shinozuka won that year’s Dakar in a Pajero that was very close to the upcoming road car.

As Mitsubishi had broken new ground in 1985 with the first outright win for a Japanese manufacturer, Shinozuka did the same in 1997 as the first Japanese driver to take an outright Dakar win. Putting a full stop on that year’s rally was the fact that Pajero Evolutions filled the first four places overall, a feat never before achieved by a single manufacturer.

Given that success, the roadgoing Pajero Evolution should be a big-dollar collectable, up there with the likes of the Lancer Evo and other WRC-inspired homologation vehicles, right? Well, not quite.

Perhaps because it’s an SUV, the Pajero Evolution has escaped some of the extreme price rises seen amongst collectable cars with competition connections. Until recently, Pajero Evolutions could be snapped up for a song and still remain close to the price of a well-equipped medium-sized SUV today.

Of course, what made the Evolution special was all its Dakar homologation gear, which made it a beast on the road and off. It’s worth noting that while the Evolution could be had with a five-speed manual or five-speed auto transmission, the vast majority were sold with the auto. 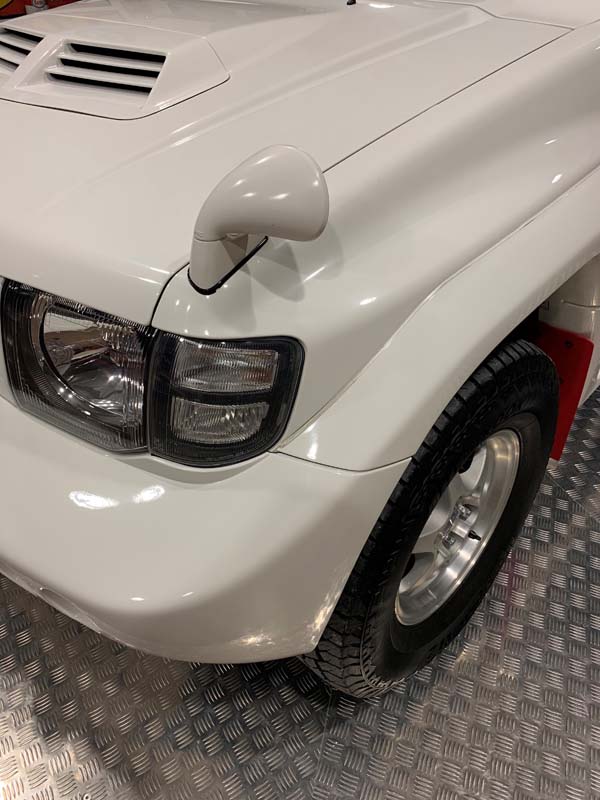 For all its extra goodies outside, the Pajero Evolution was a bit bland inside. Sure, there were Recaro front seats as standard, but the dash was mostly the same as a non-homologation SWB Pajero. It was all very analogue, too, but remember, we’re talking about a pre-2000 vehicle. There were still a few interesting goodies, though, like a display in the instrument cluster for which diffs were active and an auxiliary gauge package that included a compass – essential if you’re crossing the Sahara en route to Dakar!

Pajero Evolution buyers could option their vehicle up with a number of factory accessories, some of which are fitted to the vehicle featured. These included front bumper spotlights, roof and rear carry racks, mudflaps, a spare wheel cover, a different sill finish, funky fuel filler flap and racing-style decals. 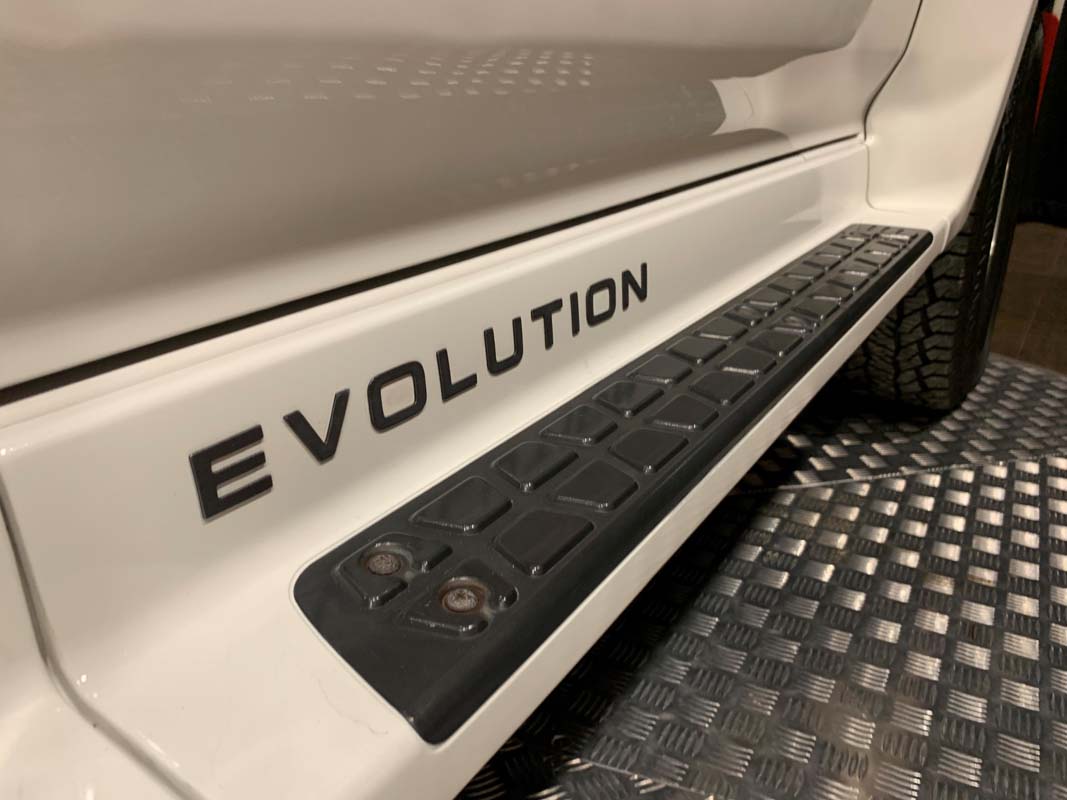 Produced from 1997 to 1999, the vast majority of Pajero Evolution homologation specials were sold new in Japan, but many have gone global since.

The unit featured was Japanese-delivered, but is listed for sale with Classic Motor Studio in South Australia. Finished in Sofia White, which was one of four factory colours available, this example also wears the bold red mudflaps, fuel filler cap and rear number plate surround from the aforementioned factory accessories range. 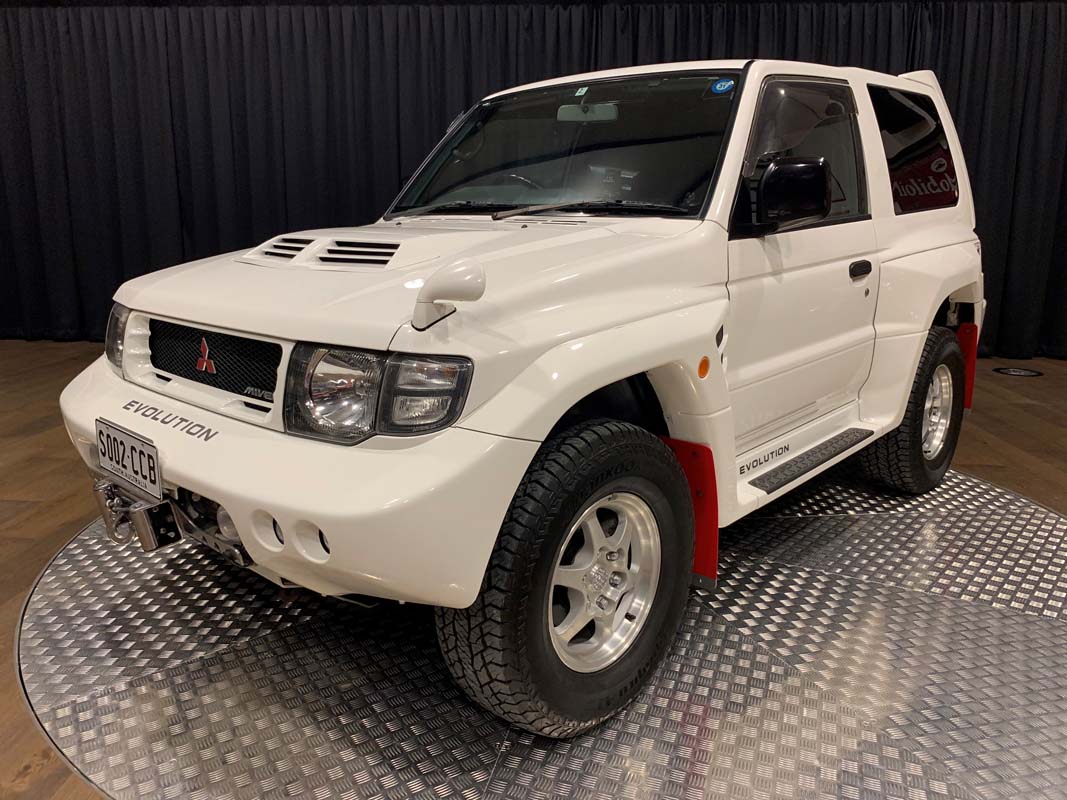 The front wing mirror is a typical JDM addition, but the winch, extra spotlights and towbar aren’t. While the Pajero Evolution had provision to mount a winch and towbar, very few appear to have been fitted, making this vehicle additionally unusual.

The wheels are stock and look as good as the rest of the exterior, reflecting careful use by its previous Japanese owners. Just as well, as most of the bodywork, along with a number of mechanical components, are unique to the Pajero Evolution, with replacement parts both hard to track down and expensive.

New Evolution decals were added before it came to Classic Motor Studio and there are some non-factory touches inside, like the modern Pioneer sound system, 12V outlet and satnav. For the purists, all of these are easily removable.

Like the exterior, this vehicle’s interior is like new, with the Recaros, rear seats, dash and leather-trimmed steering wheel all appearing unblemished.

While most examples of the Pajero Evolution appear to have been used as road cars, a few have been taken off-road, where they’ve proven to be almost as competitive as the Dakar vehicles that inspired them.

As far as rare and collectable four-wheel drives go, the Pajero Evolution is right near the top of the tree. 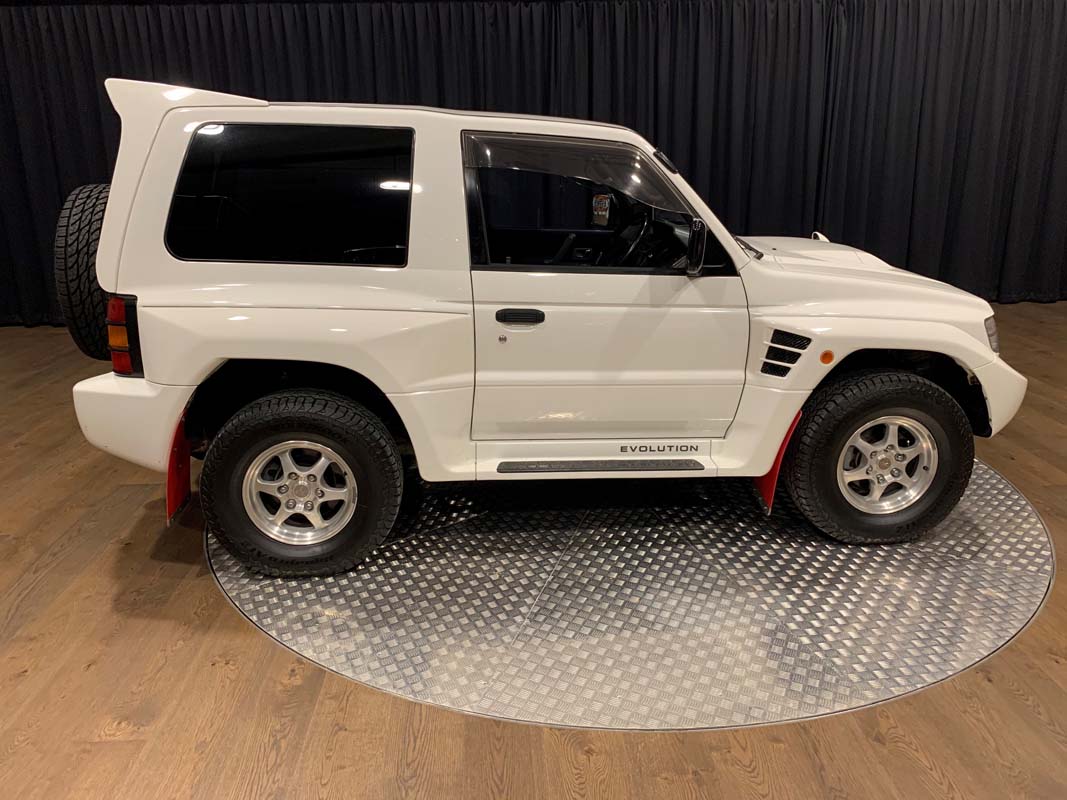 Described as offering fast and strong acceleration with fantastic torque, this vehicle’s 149,000kms shows it’s been used, but its condition shows it hasn’t been abused.

Inside and outside, everything appears fresh. Same goes for the engine bay and undersides.

A rare unit, and described as being in excellent condition for its age, the asking price for this vehicle is $59,000