From Ayers Rock to the MacDonnell Ranges, and Alice Springs with its host of scenic and historic attractions, it's certainly got the lot. While there is no denying the magnetic attraction of the Centre an area that is often ignored by travellers is the area south west from Alice extending to and beyond the Northern Territory / South Australia border. It may not have the high profile attractions of the West MacDonnell Ranges, but this area, which extends south across the James ranges and Charlotte Range, south to the Newland and Beddome Ranges, into the Pedirka Desert and Witjira National Park, better known as the Simpson Desert.

Most four wheelers crossing the Simpson push off from Oodnadatta, travel north to Hamilton and east across Pedirka Siding to Dalhousie Springs. For those completing the crossing west-east, again most head south to the Oodnadatta Track and either head south to home or west across to Marla on the Stuart Highway and travel along the black top to reach Alice Springs or turn off to visit Ayers Rock.

While this route offers an interesting and generally easy drive, for those seeking a little more challenge, a chance to travel some extraordinary country and to do so with less chance of running in to many other travellers, take the inland cross country track to Alice Springs and continue your 4x4 adventure, virtually all the way to Alice Springs. Seventy kms north from Dalhousie Springs, is Mt Dare Station, which has a reputation for a cold beer and top tucker. It is located just 10kms south of the NT border and just inside the Witjira National Park boundary.

From Mt Dare the traveller has the choice of two 4x4 routes north either along the old Ghan railway track, now know as the old Ghan Heritage trail, which provides a direct route north to Alice Springs of approximately 230kms from Finke. The second track is the old Andado Track which swings further west along the fringes of the Simpson Desert. Old Ghan Heritage Trail Finke, appropriately is located on the Finke River which originates in the east MacDonnel ranges and flows south. It is 105kms from Mt Dare and offers basic amenities for the visitor, being an Aboriginal community.

Just 21kms east of Finke, or accessible from a track from Kulgera on the Stuart Highway is a unique attraction that many would not be aware of. Called the Lambert Centre this is the actual geographic centre of Australia. A camping area provides overnight accommodation, and since its inception visitor books have been maintained and held in trust by the Toyota LandCruiser Club of Victoria. From Finke the Old Ghan railway heritage trail is a four-wheel drive alternative to the Stuart Highway. The Territory section of the old railway is largely sandy with dune ridges and plenty of rough sections.

There is a number of well preserved railway sidings worthy of a stop along the way. From Finke to Alice Springs the track follows the same course as the Finke Desert race, which is a difficult off road race held every June. The road is subject to seasonal flooding, potholes and rutting. During the dry season bulldust is common. The track is narrow in places with dense vegetation concealing oncoming traffic, making passing and driving difficult. Alice Well and the old police station make a pleasant respite just 3 kms west of Bundooma on the banks of the Hugh River. One of the gems of this route is Chambers Pillar.

Approximately 130kms north from Finke (or 164kms south from Alice Springs) is a turn-off to Maryvale Station 13kms down the track. From here Chambers Pillar is reached following a 45km gravel track which can be closed after rain. The same track is traversed on the way out. Good tyres are a must on this track due to the coarseness of the gravel. Drive long the Old South Road and turn west off Maryvale Station.

After the Maryvale turn-off, a four-wheel drive is required to negotiate the deep sand drifts and steep jump ups, and caution is needed when crossing single lane sane dunes. Chambers pillar a 50 metre high red and yellow sandstone column, rises out of the vast red plains and is carved with the names of 19th Century explorers. There is a walking path at the base of Chambers Pillar and nearby Castle Rock.

Chambers Pillar has a camping ground and basic toilet facilities and despite its remote location, always seems to have plenty of visitors. Cambers Pillar was named by Stuart in 1860, and served as a signpost for explorers and pioneers. The Hugh River Stock Route 33kms north of Maryvale provides access to the Stuart Highway and is 62kms in length. Old Andado Track This is a trip that should be only undertaken by seasoned and well prepared four-wheel drivers, preferably travelling in a convoy of several vehicles. The track borders the Simpson Desert, and drivers can expect to drive through sand dunes up to 8 metres high.

This route is part of the challenging Binns Track. Tracks link with the Old Andado Track from either Mt Dare or Finke, and Old Andado Station is reached about 110kms to the north east. This restored 1922 homestead is a living museum and visitors are welcome. The track runs mostly parallel with the sand dunes with the only attractions being the Mac Clark Conservation Reserve 38kms north of Old Andado homestead, and Highway bore a further 35kms north.

The Conservation reserve was established to protect the rare waddy-wood, an impressive erect tree and one of the largest acacias in the Centre. The track swings westerly as it enters the Rodinga range across to Santa Teresa an Aboriginal community established in 1953. From Santa Teresa the track rapidly improves for the 70km run to join the Stuart Highway, just south of Alice Springs. 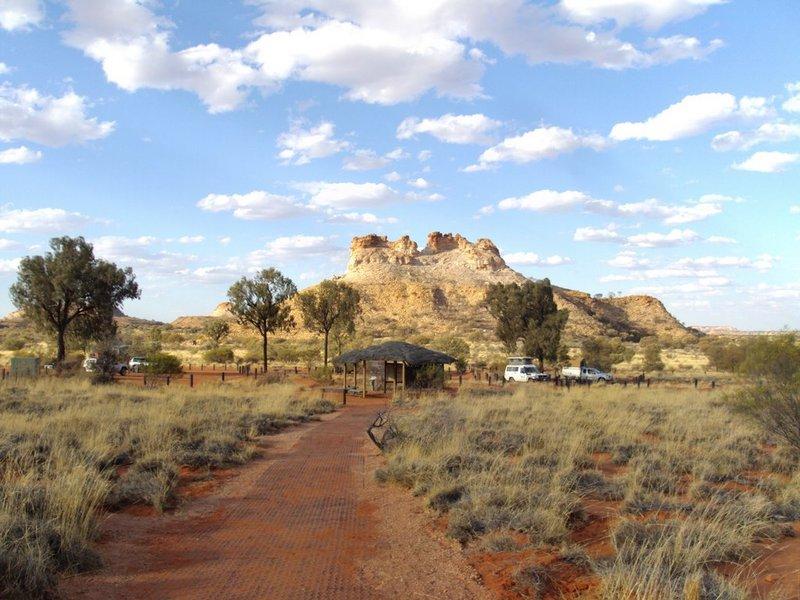 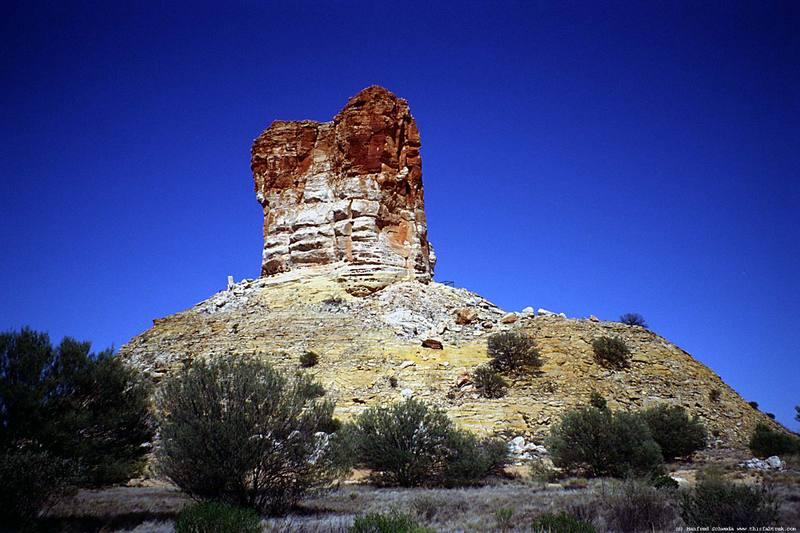 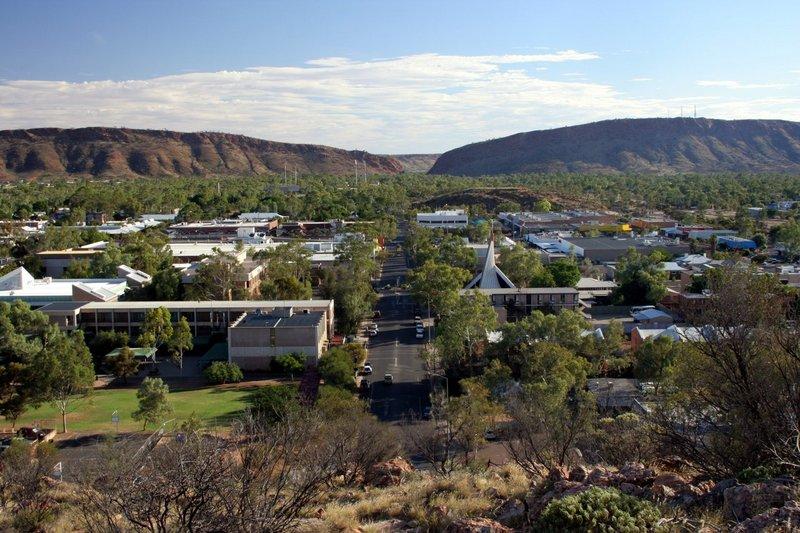 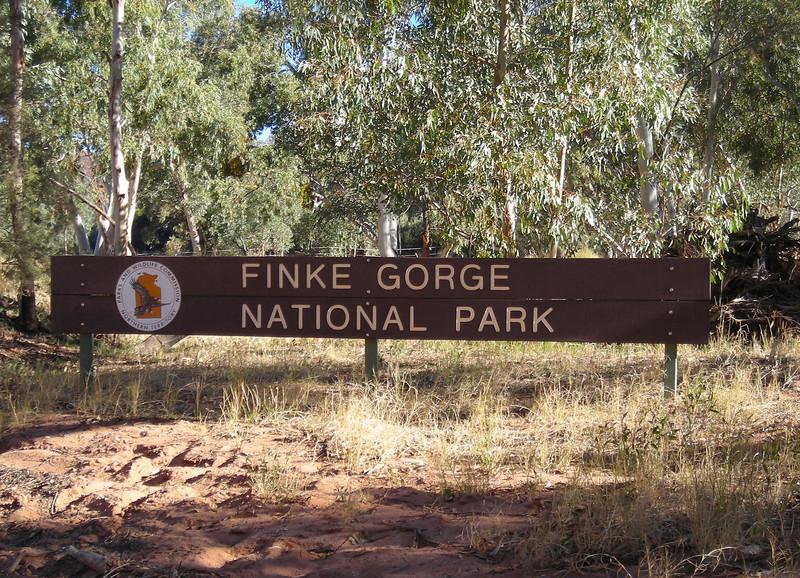