Pathfinder. Worth a look? 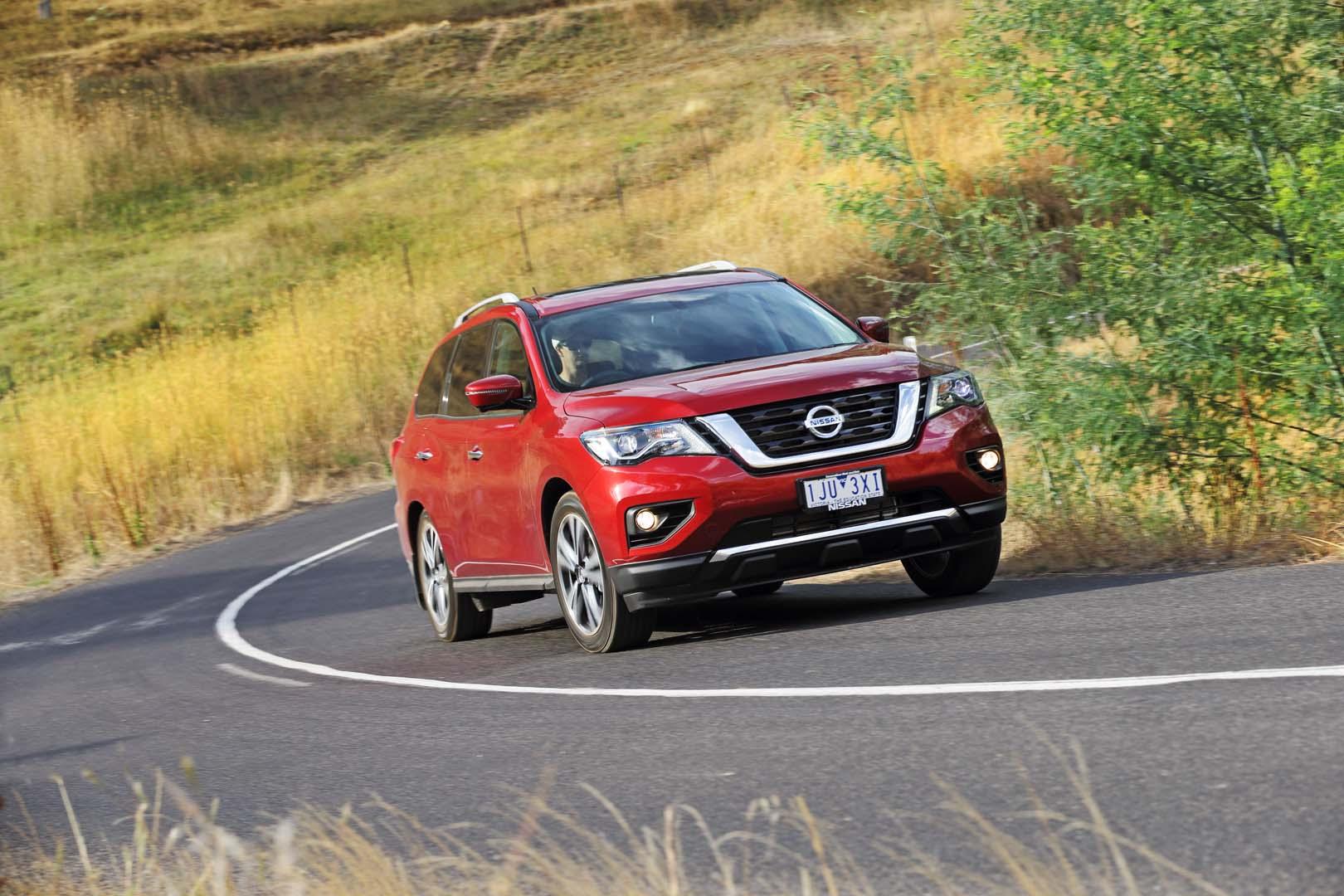 The Nissan Pathfinder falls way short of its direct competition in terms of sales but that doesn’t mean it’s a bad thing. In fact, this big seven-seat soft-roader is a comfortable all-rounder and in luxury Ti 4WD spec it’s packed with plenty of standard equipment and a comprehensive safety package.

Despite an update halfway through 2017, bringing a minor styling refresh and improved engine performance, Nissan’s big seven-seat SUV has struggled to gain traction in the competitive large-SUV segment, and sales are down some 17 per cent on last year. After spending a week in the top-of-the-range Pathfinder Ti 4WD, it seems the only plausible explanations for the big Nissan’s sales woes are not the vehicle itself, but the strength of the competition (including Mazda CX-9 and Hyundai Santa Fe), the lack of a diesel-engine variant and the Pathfinder’s ongoing identity crisis.

It seems as though Nissan has never been sure where to pitch the Pathfinder throughout its 30-plus year history. The original five-seat WD21 version (1987-1995) was based on Nissan’s Navara ute platform and had a separate body-on-chassis with a live-axle rear and independent front suspension (IFS), and a 2.4L petrol four and later a 3.0L petrol V6. The second generation five-seat R50 Pathfinder (1996-2004) had a carlike monocoque structure, but with a live-axle rear and IFS, and was a 3.3L petrol V6-only proposition. The third-generation seven-seat R51 Pathfinder reverted to using a separate chassis, again shared with the Navara ute, but with fully independent suspension, and could be had with either a 4.0L petrol V6 or a 2.5L turbo-diesel engine. The fourth and current generation seven-seat R52 Pathfinder has reverted to a carlike monocoque structure with fully independent suspension, and either a 3.5-litre direct-injection V6 engine (tested here) or a hybrid version that combines a 2.5-litre supercharged four-cylinder engine with a 15kW electric motor that uses a 144V lithium-ion battery with regenerative braking system. 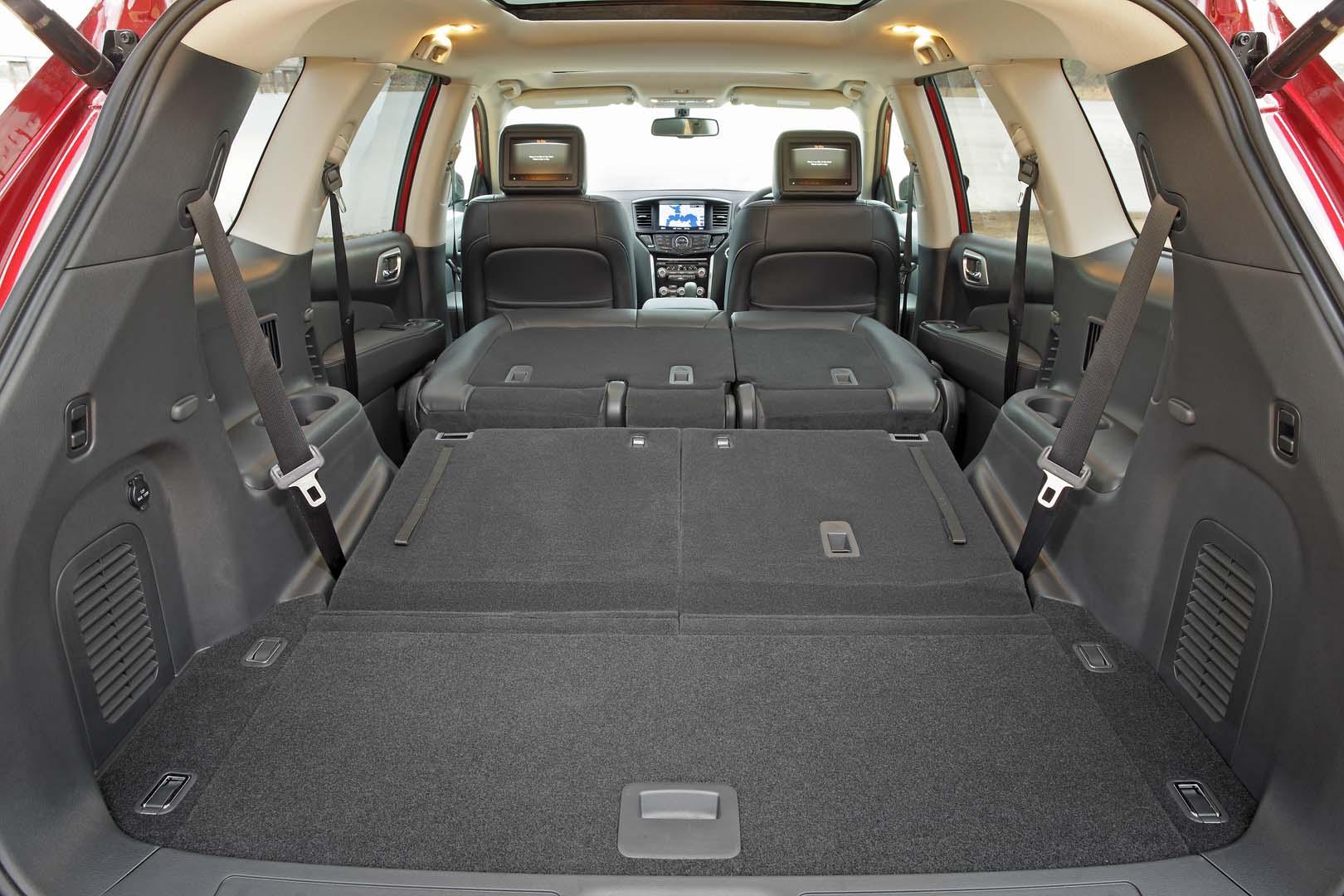 All Pathfinders feature Nissan’s Xtronic CVT (Continuously Variable Transmission) and the 4WD models also have an All-Mode 4x4-i System that allows the vehicle to be run in 2WD (front-wheel drive) for better economy, Auto for an automatic torque split between front and rear wheels, and Lock for a constant 50:50 torque split front to rear. 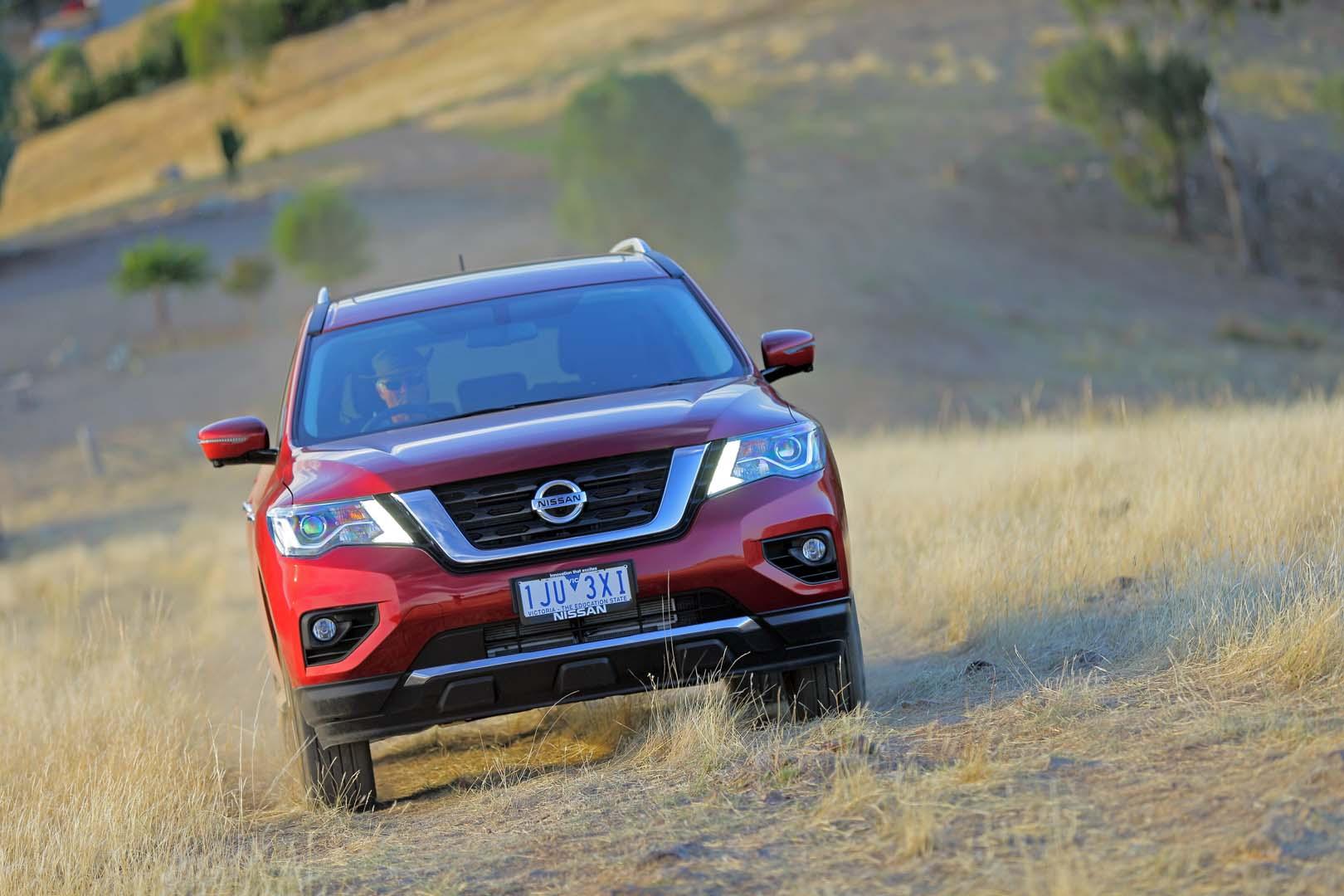 There’s little doubt that Nissan had the US market in mind when it designed the current Pathfinder and the interior package certainly has an American flavour about it, with big cushy front seats and contrast stitching on the leather-clad seats, steering wheel, armrests and centre console lid.

The 8-inch colour touchscreen is up nice and high where it’s easy to see and reach, and there’s a big colour TFT screen in the middle of the instrument binnacle. All of the switchgear is big and clearly marked too, and it takes little familiarisation to figure out where everything is.

Second-row passengers have plenty of space and the seats have a 60/40 split/fold with a ‘Latch and Glide’ system that provides fore-aft adjustment as well as aiding access to the third row. There are vents and air conditioning controls in the back of the centre console, as well as two big screens to keep passengers entertained, door cup holders and two more cup holders in the fold-down centre arm rest. The centre position isn’t as comfortable as the two outboard seats but it’s not as bad as some other vehicles.

The second-row outboard positions have ISOFIX points while the centre position has a tether-style child-seat anchor point. There’s an additional tether point in the third row.

Access to the third-row seats is good but there’s not a lot of space back there and the seats are quite flat, both in the base and the backrest. Little kids will be happy enough in the third row but tweens and teens will likely feel cramped, although the generous sun roof can lessen this feeling when the blind is open, and there are vents on either side to aid airflow.

Setting up the third-row seats is a simple affair, although you have to lean in through the tailgate opening to reach the tethers to pull them into an upright position. When all seats are folded there’s generous cargo space and a flat load floor, along with four cargo tie-down points in the back. The motion-activated tailgate comes in handy when your hands are full as it’s activated by passing your foot past a sensor under the rear bumper. 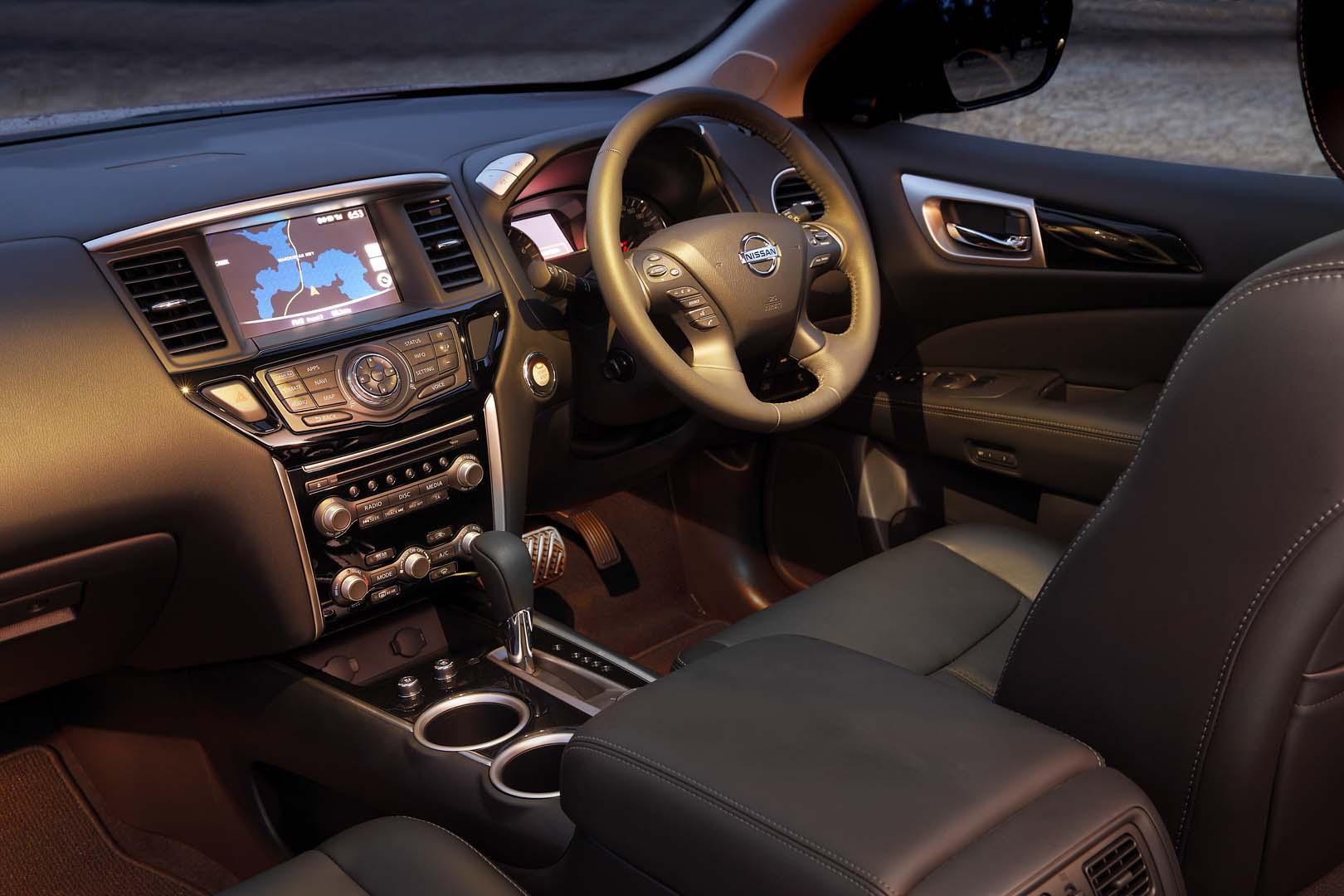 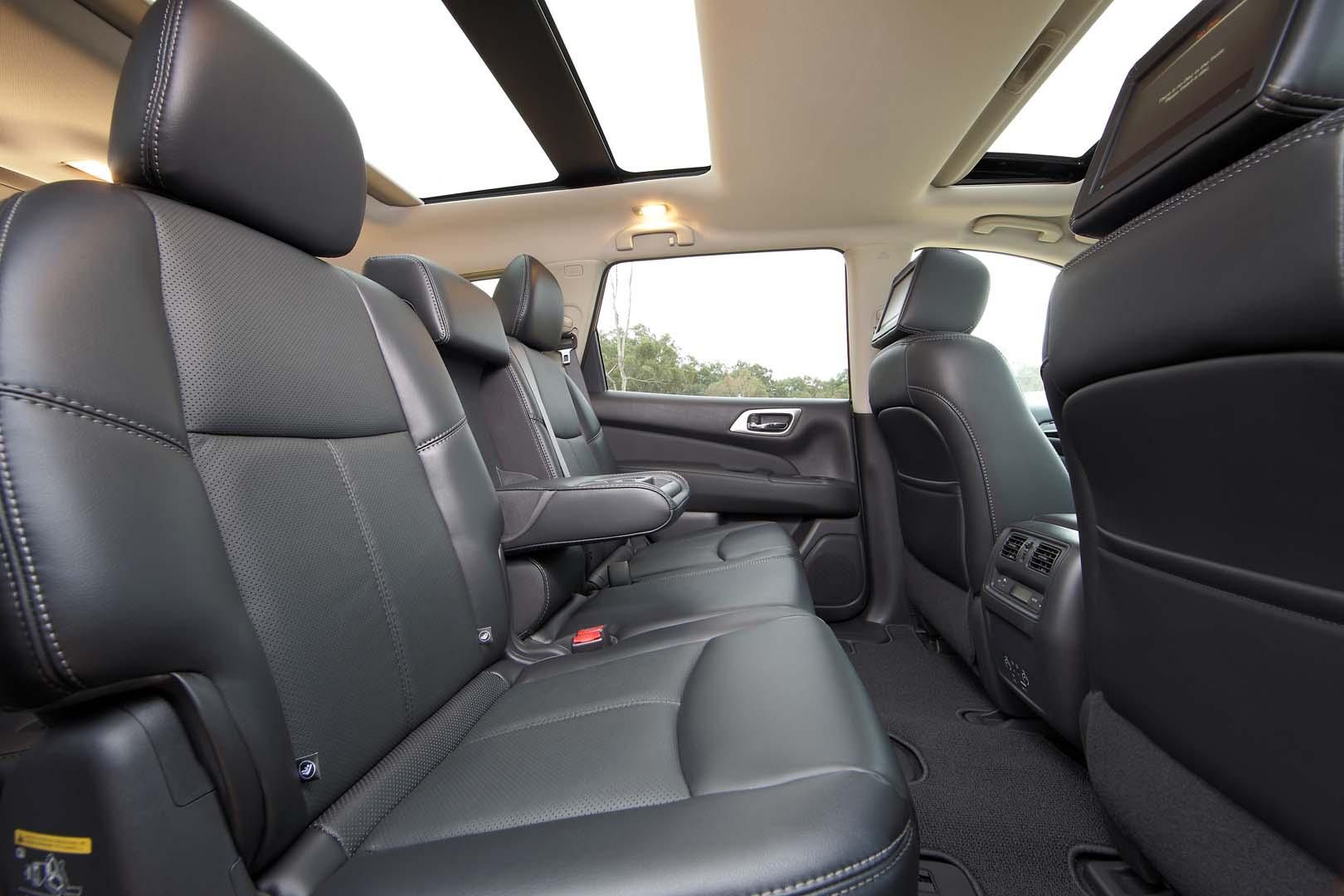 In the context of a luxury SUV the Pathfinder does everything you’d expect of it: it’s comfortable, it offers decent performance, it’s relatively quiet and refined and it handles predictably.

The direct-injection 3.5-litre petrol V6 pumps out a claimed 202kW of power at 6400rpm and 340Nm of torque at 4800rpm and it mates well to the CVT with D-step Logic Control, which essentially means it has noticeable ratio changes when accelerating so it feels more like a traditional auto. The CVT certainly makes the most of the engine’s strong midrange output – when accelerating revs quickly rise to somewhere between the power and torque peaks and then stay there while the Pathfinder steadily gains momentum until you back off. You’d hardly call it brisk, but it gets along alright.

Navigating the bulbous Pathfinder around town and into tight parking spots could be a bit of a chore if it weren’t for the around-view monitor, which gives a virtual overhead view of the vehicle and its surroundings, helping the driver to quickly spot the vehicle’s extremities in relation to other objects. The reversing camera is good too, with predictive path guides and rear parking sensors.

The Pathfinder feels at home on the open road and it offers a plush ride despite the Ti model’s low profile 235/55R20 rubber. The steering doesn’t feel as sharp as some others in the large SUV segment but it is nicely weighted and there’s decent feedback through the wheel. Likewise, body roll isn’t excessive when cornering but it feels a little more pronounced than some competitors.

Road, wind and engine noise are well suppressed, and the Pathfinder Ti’s Active Noise Control system is effective. Crank up the volume on the impressive 13-speaker Bose sound system and you won’t hear anything but the music of your choice.

You’d be hard-pressed trying to achieve the claimed 10.1L/100km combined-cycle fuel consumption claim. On test we recorded closer to 14L/100km, which included some urban, highway and freeway driving, so range from the 73L fuel tank will be limited to around 500km.

Despite its 4x4 Lock mode, the fourth-generation Pathfinder is no off-roader, and certainly falls short in this department compared with its predecessors. It’s 181mm ground clearance, shallow approach, ramp-over departure angles, and road-oriented low-profile tyres mean gravel roads and formed tracks are about as rough as you’d want the terrain to be when driving the Pathfinder. 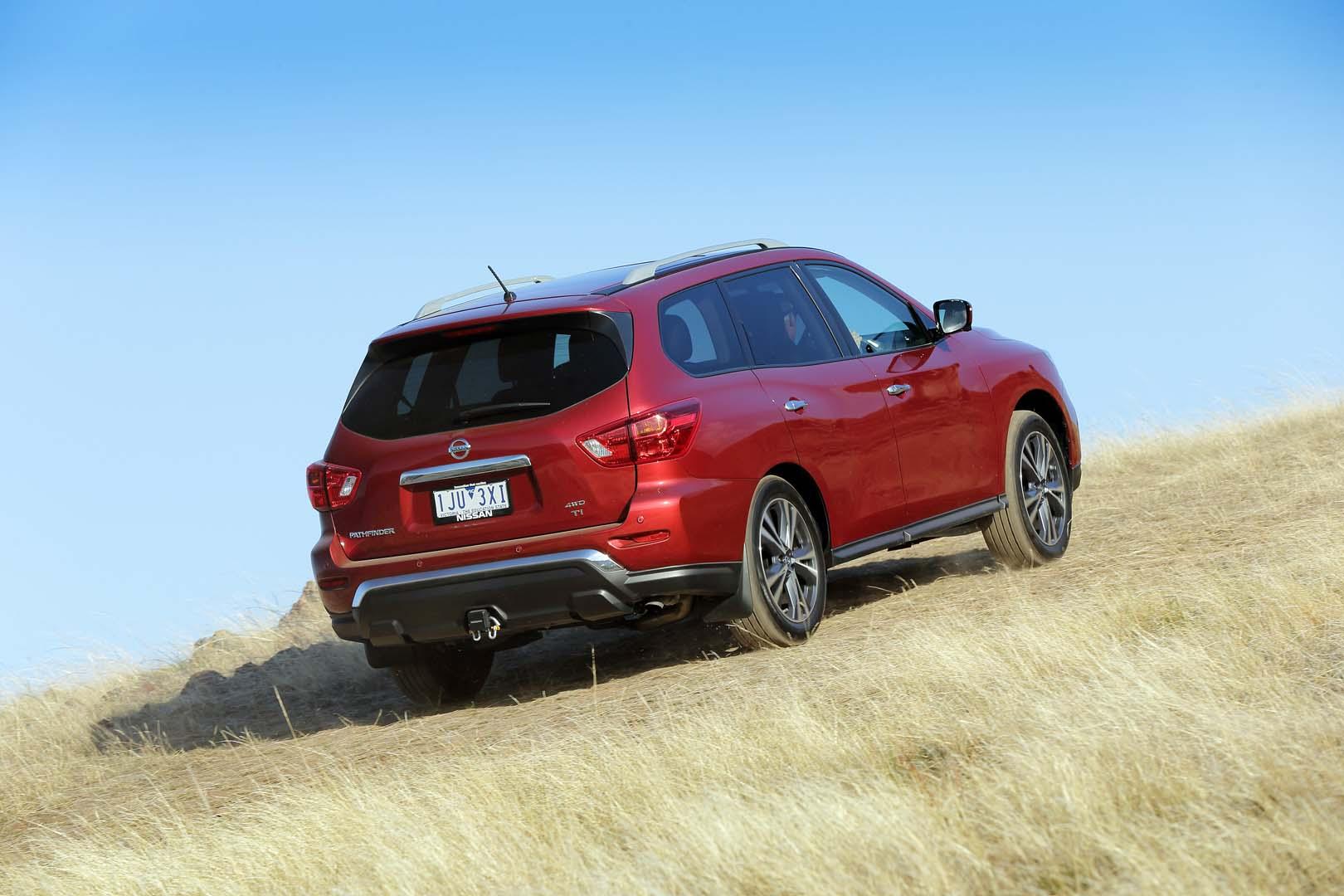 The seven-seat Pathfinder Ti 4WD is a luxurious, comfortable and capable SUV wagon loaded with gear and safety features, but its competing in a tough market segment that includes more dynamic and engaging vehicles with similar equipment levels and sharper pricing. And while the Pathfinder nameplate has been around for much longer than its competitors, it seems as though Nissan has never been able to leverage this, because it’s never been sure what it wants the Pathfinder to be. 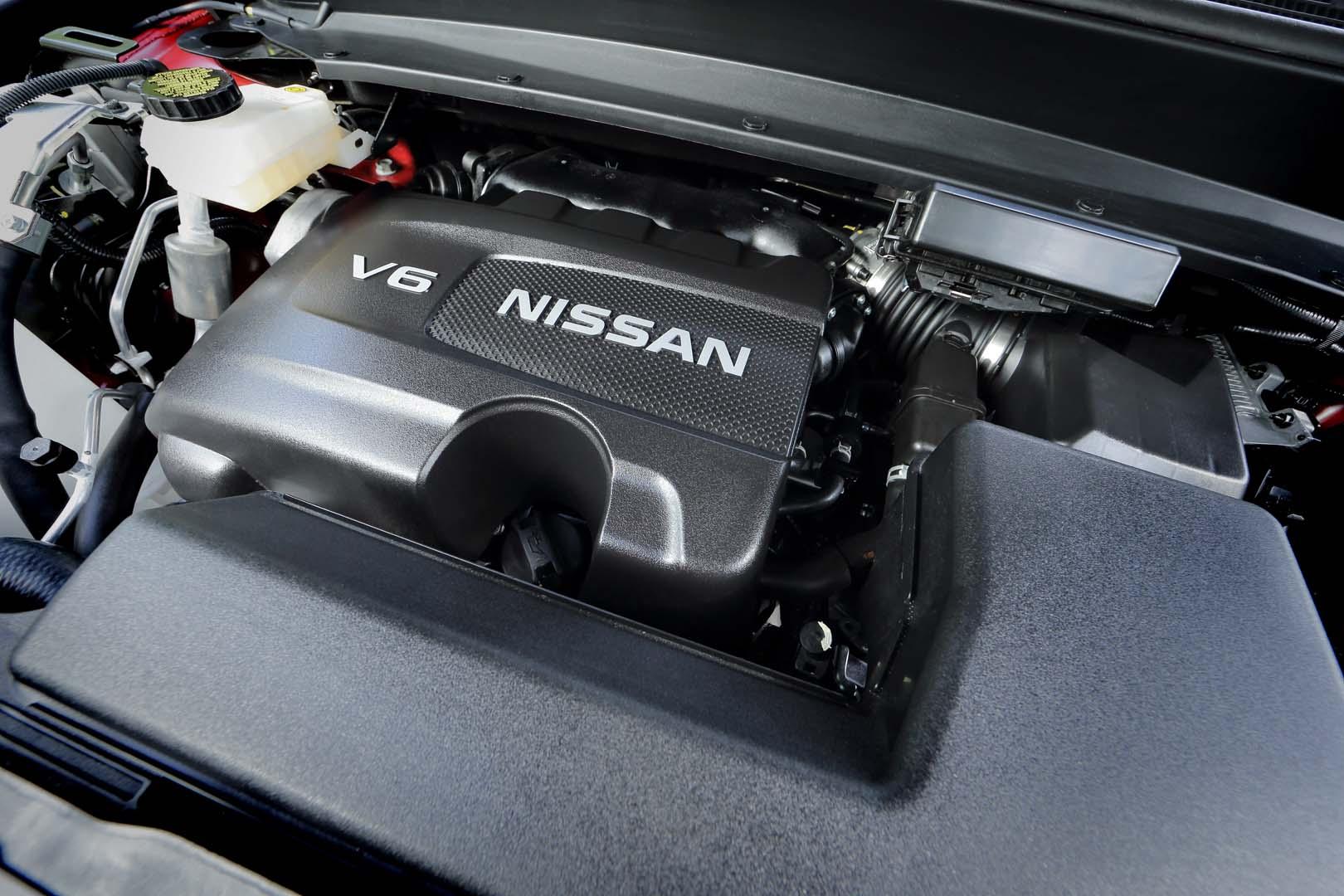 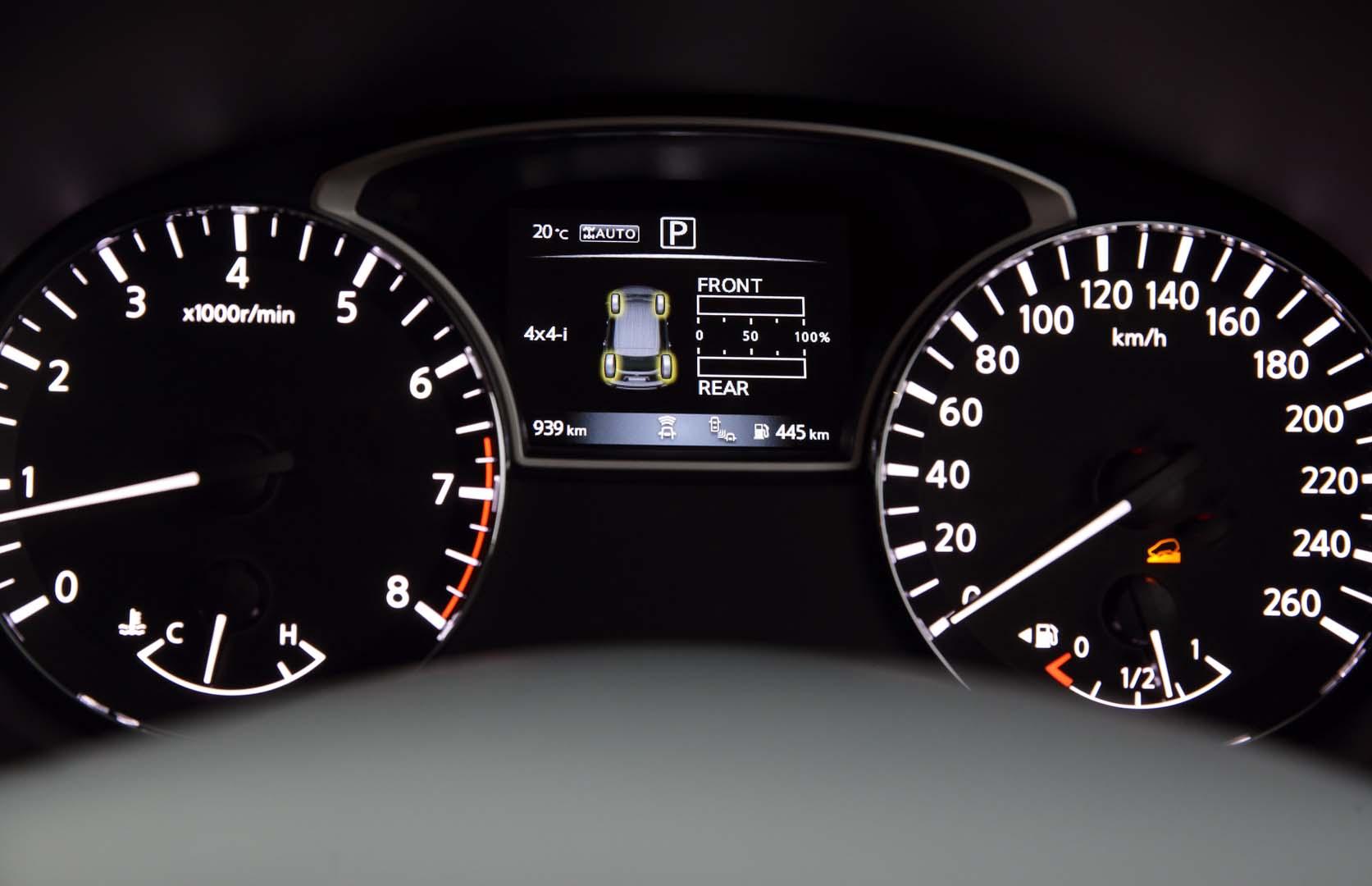 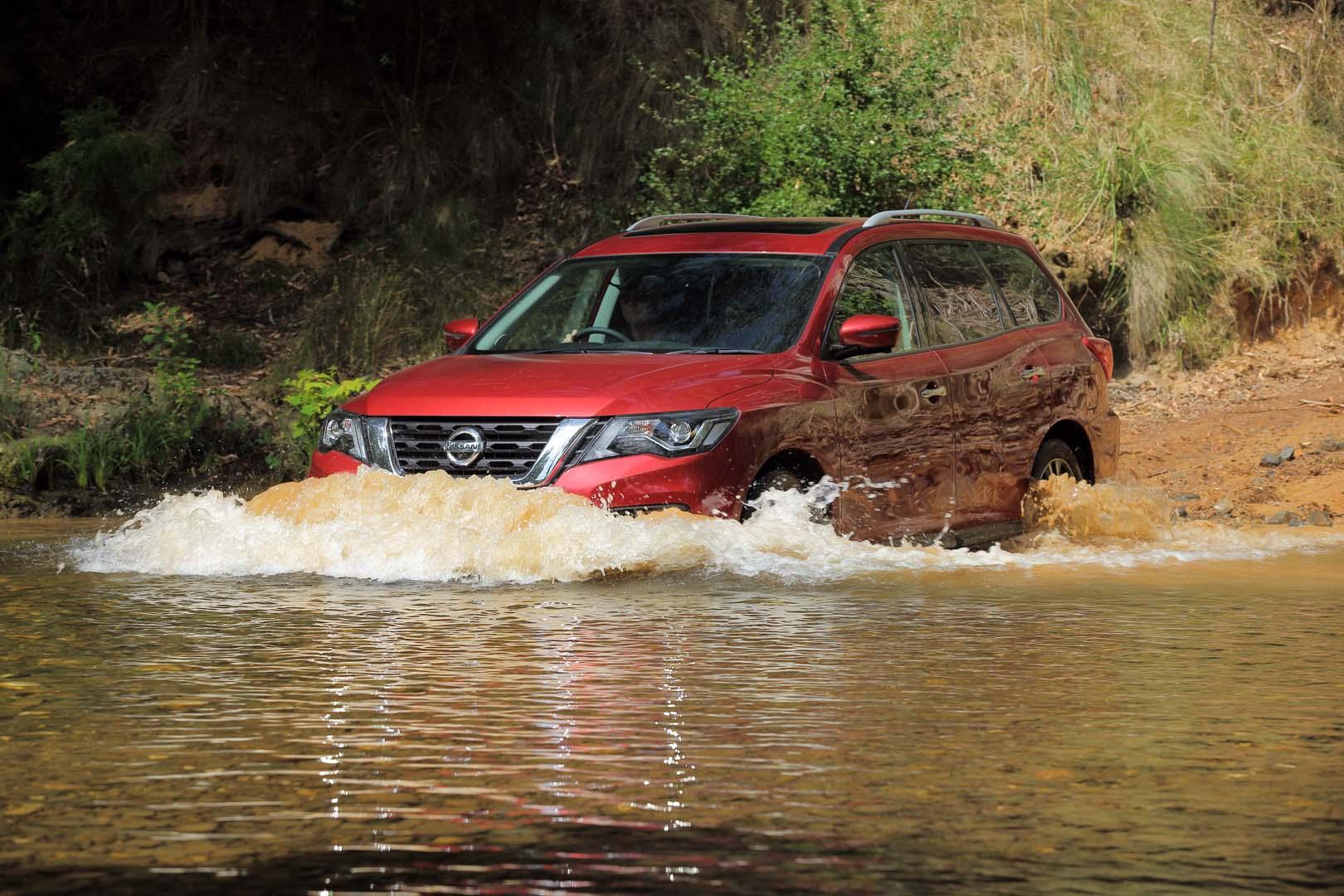