Good things come to those that wait goes the old saying, and so it is with the Ford Territory. Not that there was much to fault with the original, which quickly won the hearts and wallets of Australian buyers, but the biggest sticking point with potential customers was the lack of a diesel engine option.

While Ford wrung the best economy it could from its petrol powerplants, the line-up has always lacked a fuel-efficient turbo-diesel. The latest SZ Territory finally delivered and for this review we clocked in excess of 2,500kms across two states in an AWD turbo-diesel mid-spec TS Territory.

Move up to the mid-spec TS and you add 18-inch alloy wheels, a reversing camera, front fog lights and a different front bumper and grille, a premium ICC with its seven-speaker audio system, 150-Watt amplifier and subwoofer and an eight-inch colour touch screen.

Shell out the extra dollars for the Titanium and you're looking at a much fancier interior, 18-inch alloy wheels, a unique front and chrome-detailed upper-and-lower grille, LED front lights, an Alpine rear DVD entertainment system, leather seat trim and an integrated satellite-navigation system with the TMC6 traffic-message channel.

The headline act is undoubtedly the turbo-diesel powerplant, with the 2.7-litre V6 turbo-diesel engine designed and built by Ford at its Dagenham plant in the UK. This is a proven unit, having been fitted to the Land Rover Discovery 3 and used in revised guises by Jaguar, Citroen and Peugeot. It produces 140kW of power at 4000 rpm and a very smooth 440Nm of torque - all of which is on tap between 1900 and 2500rpm.

In rear-wheel drive guise, official fuel consumption figures are quoted at 8.2-litres/100km, with this increasing with the AWD TX or TS to 8.8-litres. For the range-topping Titanium, the figure is 9.0-litres. For the record we achieved a best highway figure of 7.4L/100km and a combined urban/highway average of 8.5L/100km - a little below the official factory figure. This translates to a range of around 900kms, which by anyone's standards is excellent.

On the road the engine is a sheer delight. It is responsive and frugal, and best of all for passengers the engine is silky smooth with no traditional diesel rattle. Launch acceleration is brisk, and once revs reach the 1800rpm mark and beyond, the engine performs effortlessly. Complementing the engine is the superb sequential-sports-shifting six-speed ZF automatic transmission.

There is a new electric power-steering system that is sealed and lubricated for life, stiffer front-and-rear suspension, enhanced roll suppression and a clever drift/pull-compensation system on the electronic stability program that compensates for conditions such as road camber and side winds.

The standard dynamic-stability-control and stronger brakes add to the feeling of well being you experience behind the wheel of the Territory.

As well as being a delight out on the open road or punting enthusiastically through tight corners, the new steering set-up makes city parking even more of a breeze. Steering is precise, well balanced and responsive, providing the driver with good feedback with minimal effort.

Safety-wise, the outgoing Territory carried a five-star ANCAP rating but the new model gains a driver's knee airbag, bringing to five the total airbag inventory for all versions.

A roll-over-mitigation system has also been added to the standard-fit Bosch
dynamic-stability-control system and it constantly monitors the vehicle's road behaviour. If a potential rollover is detected, additional understeer comes into play to settle things down. The front anti-roll bar has been stiffened by 30 percent, the front springs by 35 percent and the rear springs by 10 percent. The result is improved handling and ride, with flatter cornering and little body roll. Our vehicle being AWD, when testing over gravel corrugated roads, it was impressive how sorted the Territory is with sure-footed ride, and no rear end hop.

In the styling department, the new more aggressive frontal treatment is the most noticeable change but there are other more subtle changes such as a new rear end and C-pillar, new side skirts, new tail lights and new-look alloy wheels.

While the Territory's new nose makes the car look a fair bit longer than its predecessor, it's actually just 27mm longer.

Inside the changes are less noticeable with much of the interior architecture borrowed from the FG Falcon. The Territory is particularly user-friendly, with wide supportive seats, deep, wide footwells, 30 storage compartments and a roomy cabin to accommodate five adults in comfort. The TS model comes with a third row seat, which thankfully folds cleverly under the rear cargo floor leaving a flat floor. The third row is suitable for small children, being awkward to access, with poor rubber seat bases that sit flat on the floor. Notwithstanding the second row seats are good and supportive, with good knee and headroom to accommodate an adult. Rear access is by a full-size split tailgate or flip-up glass for smaller items.

On the road the diesel Territory is exceptionally good, with plenty of accessible power. Inside noises levels are low, with Ford implementing new seals, better insulation in the bulkhead and beneath the floor, and improving aerodynamics, all of which contribute to a quite interior. The driver has excellent vision, and in our test vehicle the rear camera and sensors were helpful as rear door pillars hinder rear vision.

In summary the turbo-diesel Territory is a first rate vehicle. It offers excellent power, ride and handling, with room for the average family. Being Australian-made is a further plus. 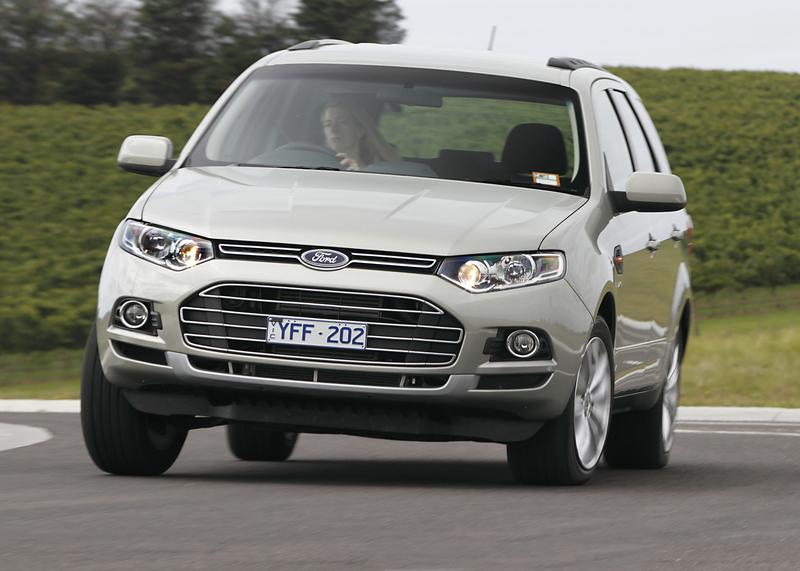 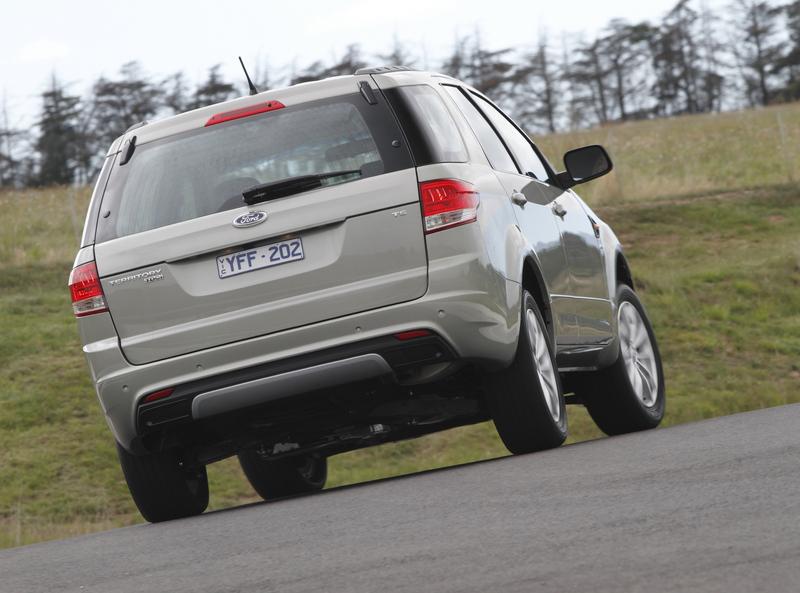 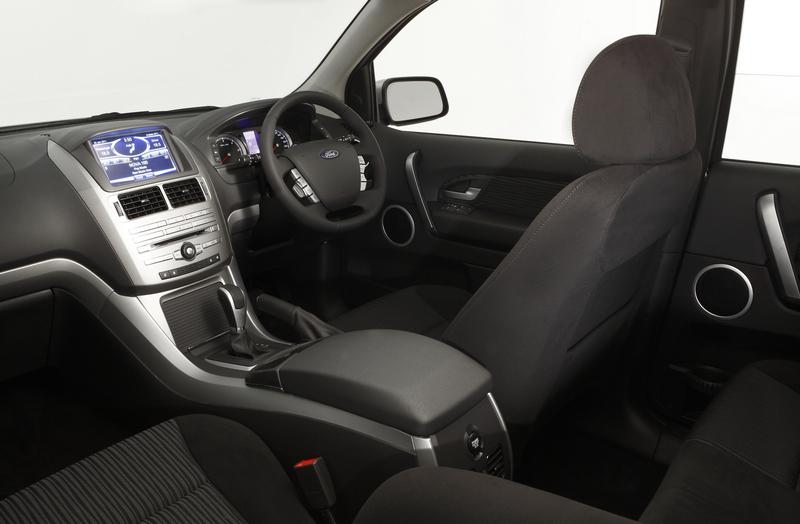 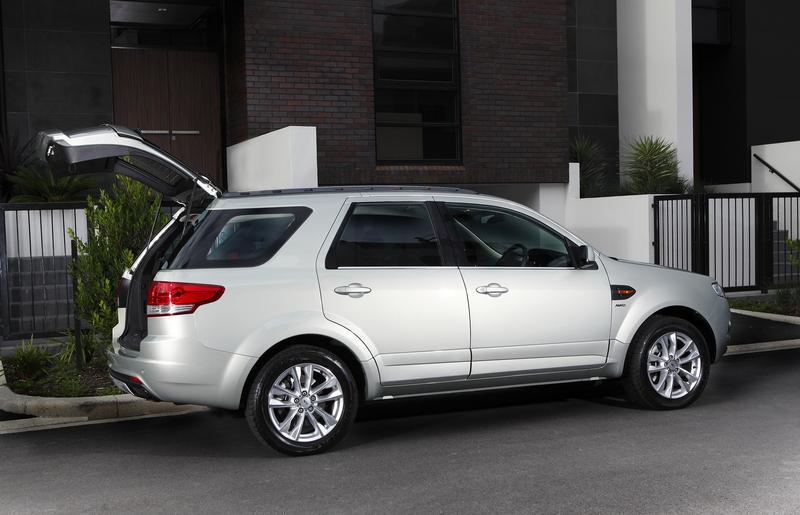