The 4x4 range was powered by a choice of the grunty 3.0-litre V6 petrol (Mitsubishi was the first manufacturer to introduce a V6 into this class of ute), and the 2.8-litre naturally aspirated diesel engine.

In 2003, the 2.8-litre diesel engine was replaced by a 2.8-litre inter-cooled turbo-charged diesel engine - the same engine that it had successfully employed in the Pajero for many years.

Accordingly the Triton ute gained huge increases in power and torque, marked improvements in all performance criteria, improved economy, and a tough-looking but modern appearance.
Power went up a whopping 30 percent, from 71kW to 92kW at 4000 rpm, while torque increased by 96Nm (49 percent) from 198Nm to 294Nm at a very useable 2000 rpm. Australia was the first major market outside South Africa to receive this package.

The new 2.8 litre inter-cooled turbo-charged engine has been a reliable and rugged engine that has previously served the needs of thousands of Pajero owners for many years. Its capacity was 2835cc and had a bore of 95.0mm and a stroke of 100.0mm. The compression ratio was 21.0:1.

The addition of the turbo charger and intercooler had a marked effect on performance of Triton diesel. Improvements were made in every area. Top speed increased from 133 km/h to 158 km/h, while 0-80 km/h now came up nearly 30 percent quicker (in 9.7 seconds, down from 13.8 seconds). Passing in fourth gear from 40-60 km/h was reduced from 7.8 to 5.7 seconds, and 80-100 km/h was reduced from 10.1 to 5.8 seconds.
These performance improvements were not at the expense of fuel economy, which was slightly improved from 9.5 litres/100 kms to 9.4 litres/100 kms.

The turbo-diesel had a 0-80km/h time of 9.7 seconds, a maximum speed of 158km/h and fuel consumption figures of 9.4L/100km.
Transmission for the turbo diesel Triton was a five-speed manual, with gear ratios taller than the superseded model. Transmissions for the petrol engines were either five-speed manual or Mitsubishi's INVECS II four-speed automatic.

Triton used Mitsubishi's tried, and proven 'Easy Select' 4WD system. This system means the vehicle must be stationary when 4WD is selected, but 2WD could be re-selected on the fly at speeds up to 100 km/h.
Drive was put to the ground through a suspension set-up that is ideal for a tough, load-carrying ute. The front suspension was independent wishbone and torsion bar, while the rear suspension was rigid elliptic leaf springs.
Wheels for the GLX diesel models were 16" X 6" styled steel rims, fitted with 205/80R16 tyres. However, the luxury GLS Double Cab Triton diesel -a vehicle with a split personality ideally suited to hard work during the week, and a raft of leisure activities at the weekend - was fitted with 16" X 7" alloy rims and 265/70R16 tyres.
The new 4x4 Turbo Diesel Triton came in four variants in three body styles - the GLX Cab Chassis, the GLX Club Cab, the GLX Double Cab and the top of the range GLS Double Cab. There were another 13 petrol 4X2 or 4X4 models that rounded out the comprehensive Triton range.

The 4X4 GLX diesel range came in six monotone colours - Marble White, Pyreness Black, Timber Green, Nares Blue, Chromatic Silver and Palma Red - for the Cab Chassis, Club Cab and Double Cab. The luxury GLS Double Cab has a choice of four two-tone colour combinations - Timber Green/Chromatic Silver, Bordeaux Maroon/Chromatic Silver, Pyreness Black/Chromatic Silver and Nares Blue/Chromatic Silver.
While the 2.8-litre turbo-diesel was a new addition to the triton lineup, Triton petrol models remained unchanged. The engines being the 3.0-litre SOHC MPI V6 developing 133kW of power at 5250 rpm, and 255Nm of torque at 4500 rpm, and the 2.4-litre 'Balance Shaft' 16-valve SOHC four-cylinder engine that developed 97kW of power at 5250 rpm and 192Nm of torque at 4000 rpm. The 2.4 litre engine was only available on 4x2 models, while the 3.0-litre V6 was available in both 4x2 and 4x4 models. The petrol engines were LPG compatible.

All models received an AM/FM radio/single CD unit that was CD-stacker compatible in place of the former radio/cassette player. The units had improved LCD readability and revised features - a "pause" button has been added and the clock was deleted.

Driver and passenger SRS airbags and leather-wrapped steering wheel were optional on GLS (manual variants also included leather-wrapped transfer and gearshift levers as part of this pack). Airbags remained a $1,200 option on all other V6 models. Colour schemes were also revised with two new monotone colours and one new two-tone combination being introduced to the palette, while the remainder were renamed in line with Mitsubishi's global names. 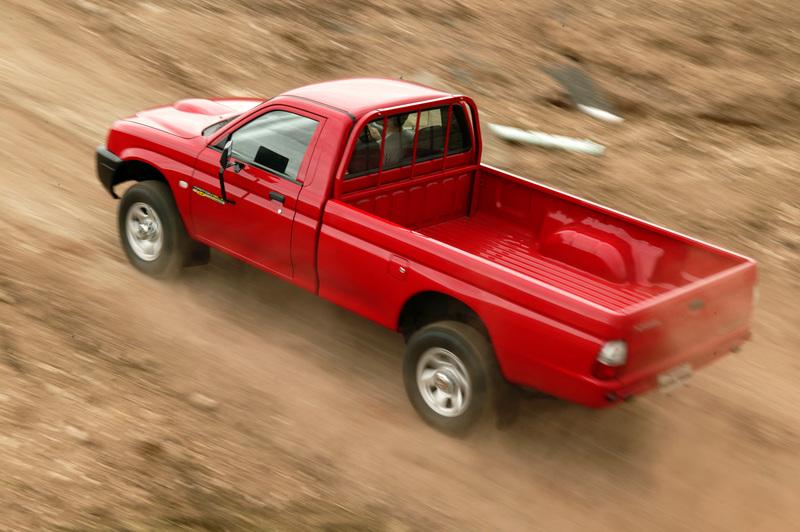