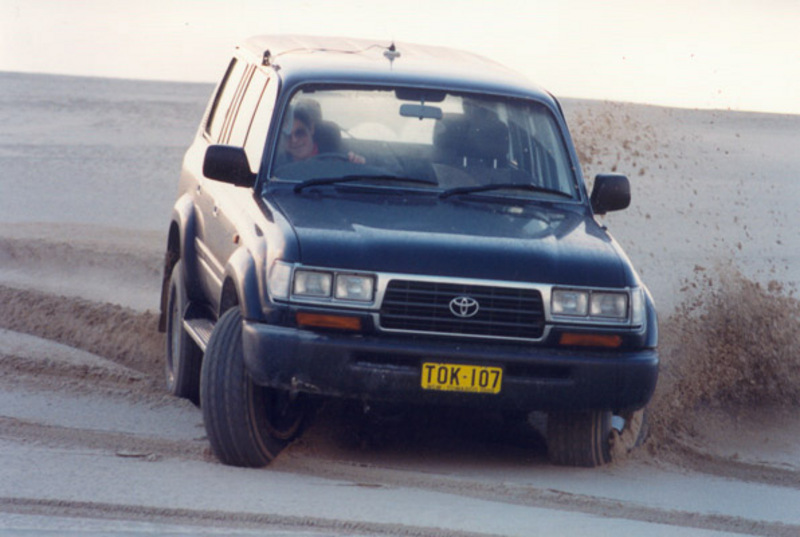 In addition to the new turbocharged diesel engine, the 80 Series wagon was available with an EFI-equipped twin cam multi-valve 4.5-litre petrol 1FZ-FE engine and the SOHC direct-acting 4.2-litre 1HZ diesel. The four-valve turbocharged engine was designed to improve engine power, torque, and economy and emission performance. It had six percent more power and torque and ten percent better fuel economy.

Externally, the new multi-valve LandCruiser looked pretty much like all other 80 Series vehicles, and apart from a 'turbo' decal on the rear side panels and slight modifications to the grille and bumper, it's like any other LandCruiser. Wrong! Once the beast was fired up, its Jekyll and Hyde Cruiser nature really began to show.

It sounded just like its predecessor, which in itself was a tidy performer, but with throttle down the new turbo-diesel responded like something else. The vehicle leapt forward and literally had power to burn. On the open road, or in throttle-on, throttle-off 4WD situations, the LandCruiser expounded confidence all the way. Considering you are looking at a two-ton vehicle, the diesel powerplant fired it forward with ease.

While there were a few other minor changes, the 1995 LandCruiser variant is solely about its new diesel engine. It is based on the previous turbo diesel, which was the most powerful turbo diesel in a 4WD wagon. Why then did Toyota upgrade a product that was already the market leader?

Basically the new unit delivered slightly more power, but was a more environmentally friendly unit. It was the turbo-diesel unit that Toyota was to use for some years.

The turbo-diesel engine was an uprated version of the older 1HD-T, and was designated the 1HD-FT. The 24-valve 4.2-litre turbocharged direct injection used four valves per cylinder and delivered a claimed additional 6 percent of power and torque and ten percent better fuel economy at constant highway speed.

Power was lifted from 115kW to 125kW at 3600 rpm and torque improved from 357Nm to 380Nm at 2500 rpm. Four valve per cylinder technology, instead of two valve, improved the engine's ability to draw in air, and while four valves on their own do not necessary deliver a cleaner emission, the 1HD-FT was designed to meet stricter European emission standards, and in so doing, meet Australian Standards.

Direct fuel injection was improved by using a greater number of smaller nozzles for better fuel atomisation. Assisting power production at the upper limits was a new turbocharger with larger turbine housing.

At a glance the 1995 multi-valve turbo-diesel does not have a lot to distinguish it from earlier 80 Series LandCruisers. Closer examination reveals a different grille with logo, different front bumper and 275/70SR 16 tyres. The front bumper was mounted slightly forward to allow the fitment of airbags in the Sahara model, and had larger air vents for increased cooling.

'Turbo, multi-valve' decals were placed on the rear side panels. Inside, the dash was revised with a more compact design. There was new head lining and seat trim.

While many use the turbo-diesel for city cruising, the LandCruiser is still not an ideal beast with which to tackle city traffic regularly. Yes, seating and appointments are comfortable, but the manual gear change became hard work after a few sets of lights. At this stage, the gear change was still very much truck related. While a magnificent engine, there was also a delay factor, followed by a boost of power. The Cruiser's acceleration was sluggish moving off, and the power of the turbo was not instantly revealed. The engine worked hard before letting go. Once wound up it was fine, but the period between moving off and all-systems-go was irritating at best in city cycle touring. The turbo didn't kick in until around 1800rpm.

Where the turbo-diesel did shine, however, was long distance travelling. Once on the highway, the biggest problem was keeping near the speed limit. For the record the turbo-diesel ran out at a top speed of 170 km/h, with no vibration and impeccable handling and road grip.

The motor was very responsive between 40-110km range and it was this grunt that made the turbo-diesel a popular choice for towing and long distance touring.

As expected, with the added benefit of the turbo and the pure grunt of this engine, off road touring is a breeze. In many respects this is a pity, in that today's four- wheel driver can often overcome bad gear selection, or an error in obstacle assessment, simply by sticking the boot into the machine. In the "good old days" 4WD engines were not this flexible and drivers needed to make correct gear selections and select the right line of approach when tackling obstacles. Toyota is making four-wheel driving very accessible and easy, with engines that will pull the vehicle through, even when the driver has the wrong gear, or has chosen the steepest point of an obstacle.

The Toyota's long travel suspension delivered a reasonable ride over rough terrain, and rocks and ruts were traversed with ease.

In the sand, the placement of the spare wheel under the vehicle was like carrying an anchor, which was only compensated by the extra grunt of the motor. It should also be noted that ground clearance is reduced in the turbo-diesel with the 1995 LandCruiser 50mm lower to the ground.

The LandCruiser is a proven performer and the addition of the new multi-valve turbo diesel in 1995 was a further improvement. While not delivering a significant increase in power, many of the other improvements were notable. The choice of uprated tyres, standard auto locking centre diff, compact dash and emission friendly engine were pluses. 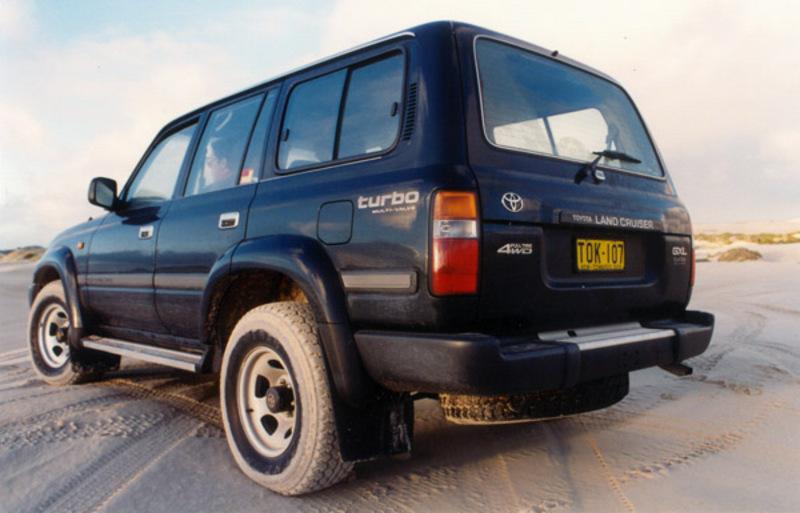 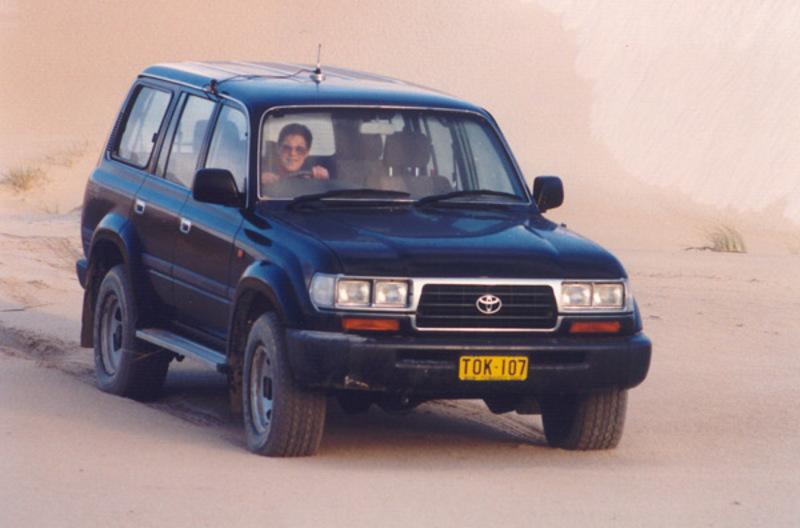 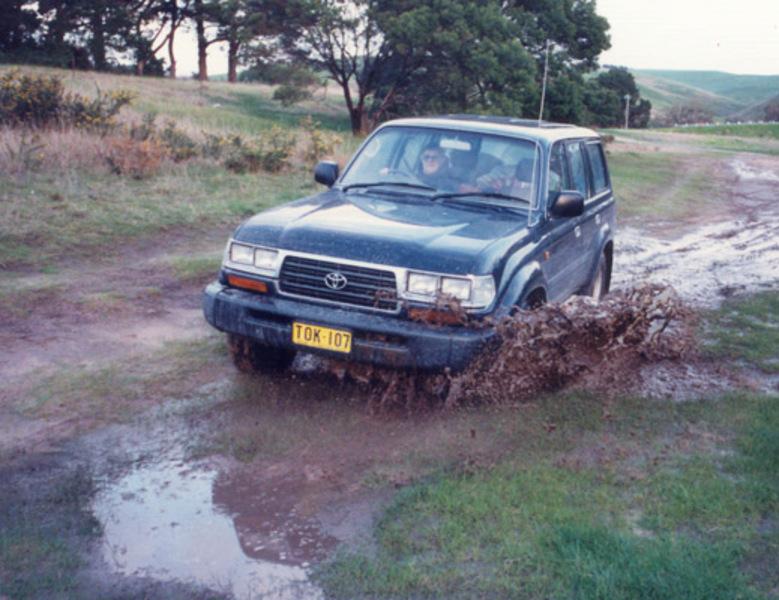