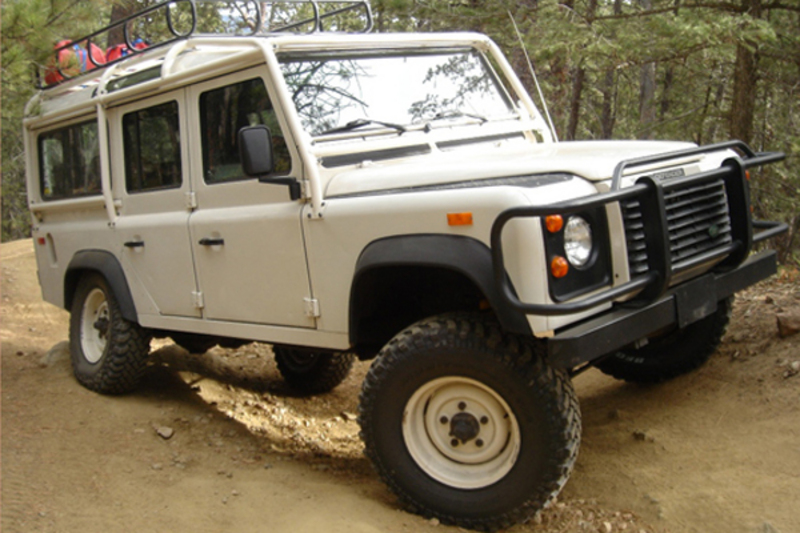 While Land Rover has been at the cutting edge in delivering four-wheel drive comfort and technology in the Range Rover ...
Land Rover re-created a legend with the launch of the 1993 Defender in wagon and hardtop versions.

While Land Rover has been at the cutting edge in delivering four-wheel drive comfort and technology in the Range Rover, it has also focussed on providing a workhorse range of vehicles that have their origin in the first Series I and II Land Rovers of the 1950s.

Land Rover sought to bridge the gap between the top end Range Rover and the Defender models with the Discovery in 1989, and in 1993 further differentiated its brand range with the launch of a new Defender wagon and hardtop.

The Defender shared much in common with earlier Land Rovers, offering a rugged, tough-as-nails look, and no nonsense 1990s technology. It was a logical progression from the upgraded County Wagon, but in essence the Defender was the latest take on the classic Land Rover working class hero that had been in production continuously for over 40 years.

The new Defender wagon and hardtop were launched at the Melbourne Motor Show in March 1993. They joined the Defender cab/chassis to further broaden Land Rover's serious "workhorse" four-wheel drive lineup.

The Defender retained much of the external styling of the County and the line of heritage was obvious. Land Rover had no expectations on making sales in the recreational 4x4 market, instead delivering a serious no-frills machine to meet the demands of a working four-wheel drive.

The Defender was built to tackle the toughest conditions and was happiest lugging a full load across rugged terrain. The working Land Rover has always been a favourite with military forces around the world and the qualities demanded by this, the toughest market of all, were fully embodied in the new Defender.

The Defender's massive box-section steel chassis clearly showed the designers' two priorities: uncompromising durability and unrivalled off-road performance. Resistant to twisting or bending, the ladder chassis frame is mated to a body made of aluminium alloy - rustproof and also very light - a formula which gave the Defender a low centre of gravity and stability when travelling across rough country.

Combined with a lockable centre differential, generous ground clearance and long-travel coil suspension, wheels are kept on the ground, maximising traction. Permanent 4WD, front disc brakes, and superb engine choice gave the Defender a great advantage over its competitors. The ride of the Defender was good, with live coils front and rear, front leading arms and rear trailing arms and central upper A-frame. This arrangement delivered a surprisingly smooth ride, and with long travel coils, has little trouble in tackling rough terrain. A healthy 35-degree departure angle and 50-degree approach angle, plus 215mm ground clearance, make the Defender an able off roader.

One of the key strengths of the Defender was the use of the Land Rover Tdi 2.5-litre turbo-charged and intercooled direct injection diesel engine.

All three models were powered by the same 2.5-litre, direct injection, turbo-intercooled, four-cylinder diesel. The Tdi engine was remarkably responsive, with loads of torque and good economy.

The 2.5-litre intercooled turbo diesel was the result of joint development by Land Rover and Austrian diesel specialist AVL. It featured a new cylinder head and induction system. The head was of light alloy, and induction from a Bosch fuel-injection pump, two-stage lift direct injectors and a garret T25 turbocharger matched with an integral intercooler. It generated a respectable 80kW of power at 3800 rpm and 255Nm of torque at 1800 rpm. Compression ratio was 19.5:1.

The Defender's gearing was lower than the Discovery's by virtue of a lower high-range transfer ratio. Otherwise, gearbox and axle ratios were the same as the Discovery. Like the Discovery, the Defender also has the unusual location of reverse gear in the top left hand corner of the shift pattern.

The Defender was no Discovery inside, but neither was it designed to be. The interior was strictly no-frills, but still a far improvement on earlier workhorse models, with front bucket seats, centre console, small padded steering wheel, fully lined interior, and padded and sound-proofed dashboard and roof lining.

Instrumentation consisted of speedo and gauges for fuel, temperature and voltage. A number of warning lights were housed under the main gauges, with the absence of a tacho the main omission.

The five-seater Wagon had cloth upholstery, while the Hardtop had practical vinyl. The Defender retained the traditional Land Rover opening vents beneath the windscreen, and the Wagon featured side roof window.

Seating was adequate, with sufficient leg room for rear passengers - often a problem in many wagons. The rear bench seat had a 30/70 split, allowing the cargo area to be increased, yet still retaining a seat for a third passenger.

The driving position was high, with no adjustment available for the steering column.

The spare wheel was mounted on the rear door and impeded rear vision somewhat. Side window winders were very awkward to get at, and a left-side ignition lock on the steering column was also difficult to access.

Dust and water sealing were only average, although effective soundproofing allowed talking without shouting! The boxy shape of the Defender created quite a bit of wind noise, and the diesel was noisy.

The Defender will do just about anything asked of it off road and for this reason, it meets the criteria required by mining companies, farmers, and those wanting a tough workhorse.

Appearance is pure Land Rover, with no pretensions of appeasing urban cowboys. Panels are flat and certainly invoke memories of past Land Rovers.

For what it's designed for, the Defender is amongst the best available. 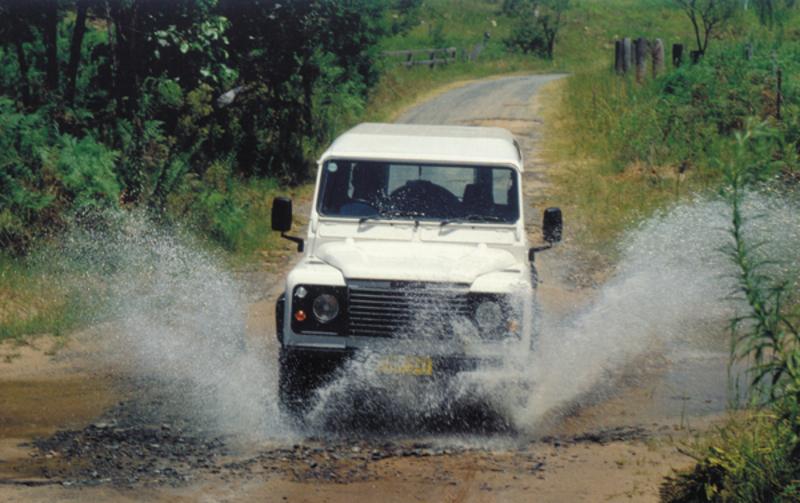 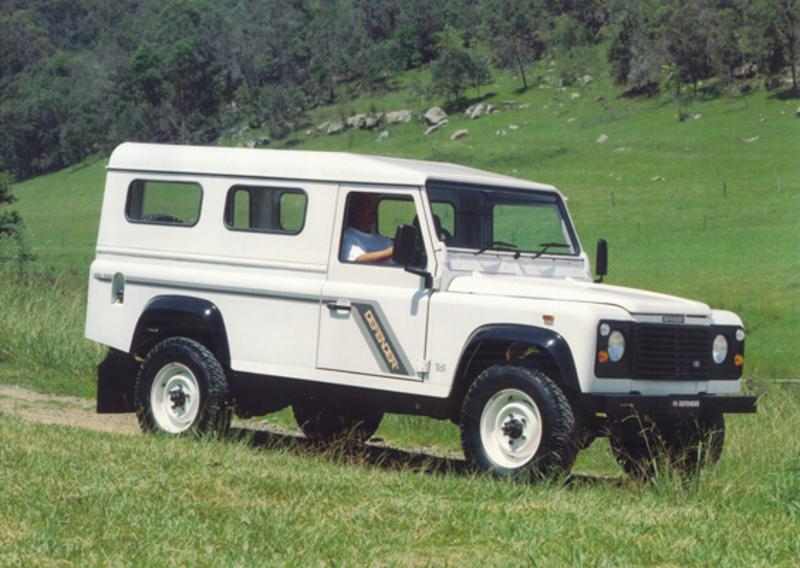 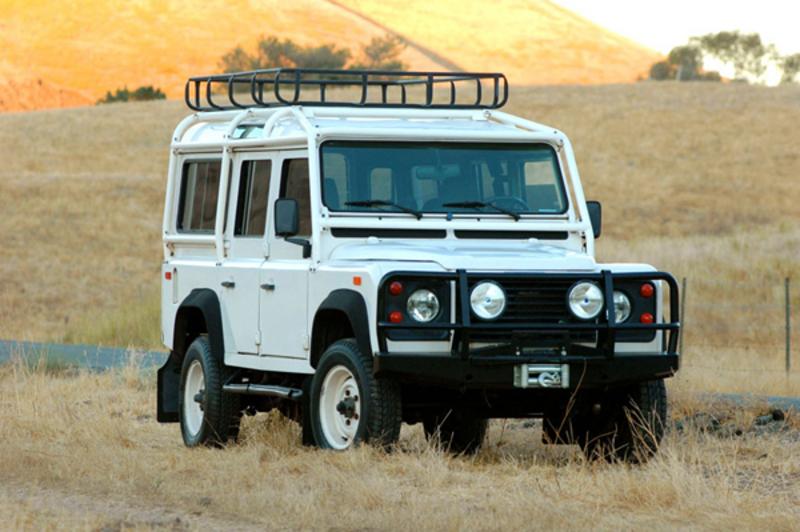 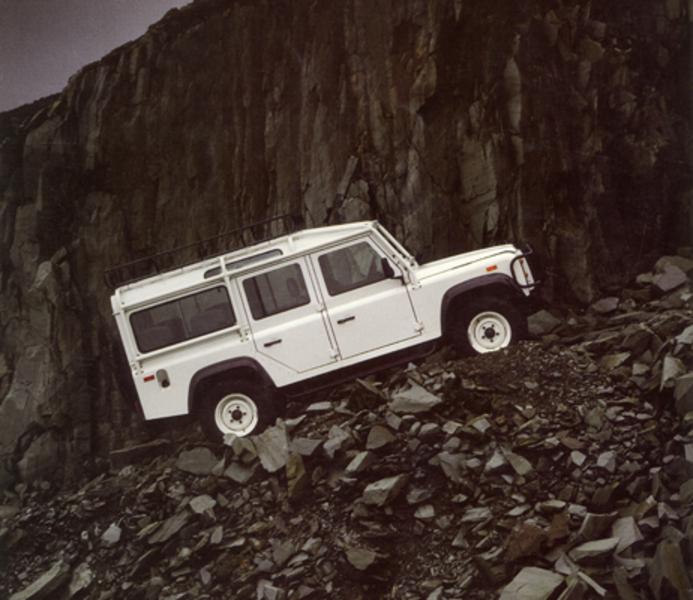