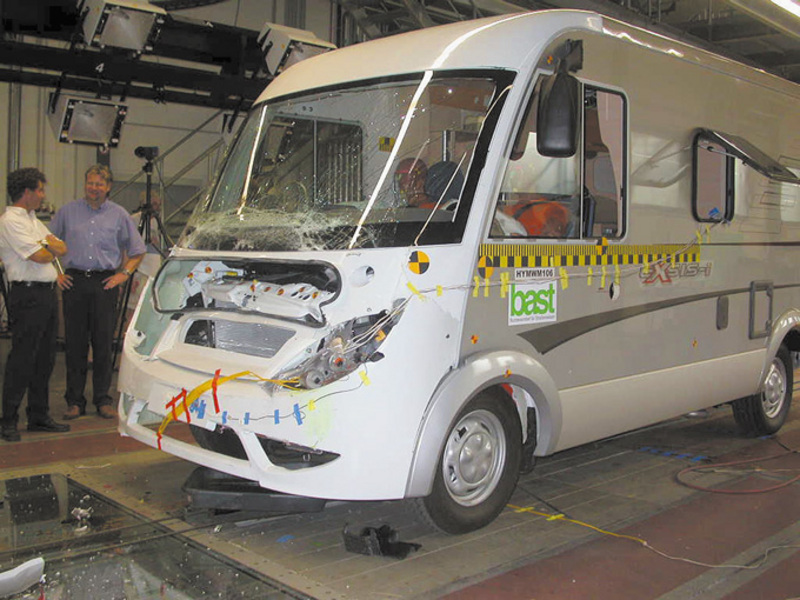 Hymer has taken the lead on safety in Europe, where whole-of-vehicle crash testing for integrated motor homes is not compulsory. Integrated motorhomes have two main parts - a chassis constructed by an automotive manufacturer such as Peugeot, VW or, in Hymer's case, Fiat, Mercedes and Ford, and a cabin manufactured by a recreational vehicle company which is mounted onto the chassis. The two piece construction of integrated motorhomes means the separate parts of a motorhome adhere to different regulations. Although motorhomes are individually tested, there is no uniform European regulation requiring whole-of-vehicle crash testing.

"Hymer is second to none when it comes to safety testing," said Hymer Australia sales and marketing manager Richard Towson. "All Hymer motorhomes available in Australia - including T-Class Tramp, B-Star Line and 830 S-Class - have undergone the crash course. "Performing crash tests on all its motorhomes helps Hymer's engineers understand the forces at work in a collision. "Simulation of potential real-life accidents is a necessary part of the manufacturing process as the findings lead to vehicle design that ensures optimal safety for all occupants." Mr Towson said that the Hymer Exsis-i integrated motorhome, which is due in Australia this year, is a recent example of the crash testing process.

The Hymer Exsis-i was weighted down with the equivalent of the maximum number of persons and fully loaded with equipment including optional extras, weighing a total of almost three tons, before being slammed into a concrete block without braking while travelling at just under 33km/h. The resulting damage was mainly superficial, and Hymer was extremely satisfied with the outcome. The nose crumple zone performed brilliantly upon impact and compacted by only 55 centimetres as a result of the collision. The windscreen - which normally does not survive such tests - was cracked but still stayed firmly bonded in the frame after the crash. The driver's cabin of the Exsis-i remained fully intact, the A-pillar hardly moved and there was minimal displacement of the steering wheel and pedals.

The interior, furniture and walls showed no signs of any damage. Ultimately, in a similar real-life scenario, the occupants would sustain only bruising and grazing, or at the very worst, broken ribs. This crash test also proves it is almost inconceivable for the body of Hymer motor-homes to become detached from the chassis during an accident. Hymer's decision to crash test its vehicles - which costs in the region of $40,000 per individual crash test, plus the cost of the vehicle crashed - is testament to the company's commitment to passenger safety.

The test also shows that Hymer's patented PUAL body construction, special bonding technology and optimal-strength materials hold up under extreme conditions. The special Hymer bonding technology elastically bonds the entire superstructure, including the chassis. In additional safety measures, Hymer motor-homes have been equipped with an Anti-lock Braking System as standard and the majority have a Traction Control System. Hymer also conducts an extensive range of other tests on its motorhomes, including fatigue, durability, simulated and physical testing.