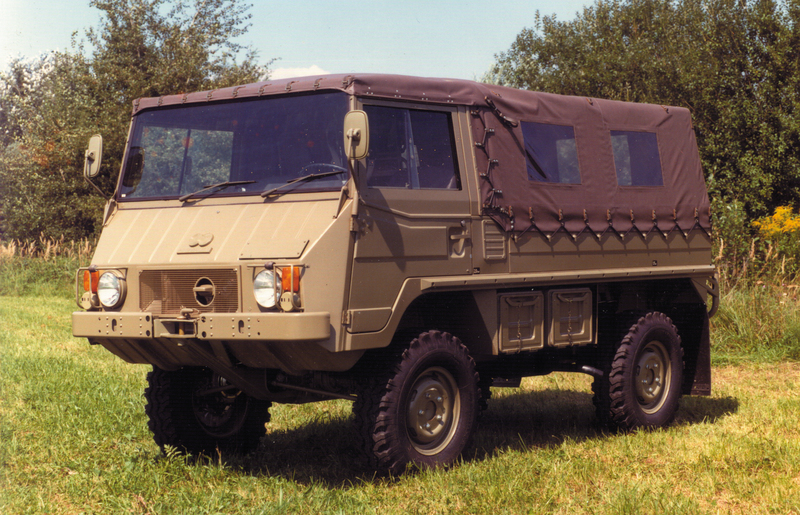 Although it is now 52 years since the first Haflinger was produced, it remains a much sought after collector's vehicle, and Haflingers still regularly appear in Just 4x4s - many having been lovingly restored
This is not surprising as it came from the stable of cross-country vehicles developed by the famous Austrian Steyr-Daimler-Puch company.

Although it is now 52 years since the first Haflinger was produced, it remains a much sought after collector's vehicle, and Haflingers still regularly appear in Just 4x4s - many having been lovingly restored. The much bigger Pinzgauer followed the Haflinger, and was produced in 4WD and 6WD form from 1969. Both vehicles were available in Australia, the Pinzgauer from the seventies, the Haflinger earlier, but price, engine power and spare parts supply were limiting factors in their success. Notwithstanding both were brilliant all-purpose workhorse vehicles, and while developed for military purposes were also built for a civilian market.

Who built the Haflinger?
Steyr-Puch is not a name, which runs off the tongue as a familiar producer of 4WD vehicles. Nevertheless the Steyr Company, later Steyr-Puch, and later still Steyr-Daimler-Puch, are respected vehicle builders of a variety of cross-country, military and conventional vehicles. Josef Werndl established the company in the Austrian township of Steyr in 1864 as a weapons producing concern. The concentric circles of today's Steer badge represent a target from these earliest beginnings. The Austrian automotive industry is among the oldest in the world, and has always worked in close liaison with the country's military.

Steyr's first dedicated move into the manufacture of automobiles came following WW1 when new directions were required as a result of a ban on arms manufacture. The first production car was the Steyr Waffenauto, or Arms Car of 1920.
The company's bank collapsed during the Great Depression and was forced to join with Austro-Daimler-Puch in 1928. In October 1935 the companies merged wholly to form Steyr-Daimler-Puch, with Austro-Daimler vehicle production absorbed into the Steyr operation. Post WWII Steyr assembled small Fiats, which continued until 1978. From about 1953 Steyr concentrated on tractor and commercial vehicle production.

Its achievement in the all-wheel drive field of vehicle engineering and design set world standards, resulting in sales of transmission, transfer case and suspension systems to various 4WD and 2WD manufacturers.
The expertise of Steyr has allowed the development of the 4WD Honda Civic, the powertrain for the 4WD VW Transporter, the Mercedes-Benz G-Wagen, and the Fiat Panda 4WD. The company has also been involved in the development of new 4WD products for both Nissan and Suzuki.

The Mercedes-Benz G-Series 4WD was built jointly by Mercedes-Benz and Steyr-Daimler-Puch at Graz in Austria. Steyr bought out Mercedes in 1981 but continues to build the vehicle under contract for civil and military customers with Mercedes doing the marketing in all countries other than Austria, Switzerland, Yugoslavia and the eastern block where it is sold under the Steyr-Daimler-Puch badge.

Haflinger 4x4
Cross-country vehicle development and design commenced in earnest in 1955 with the Haflinger. Named after a famous breed of Austrian horse, the Haflinger was a small .5-ton vehicle with extreme cross-country mobility. The basic vehicle was of open platform design although canvas and various hardtop bodies were available.
The Haflinger was only 1.5 metres/60 inch in wheelbase, powered by a 2-cylinder air-cooled petrol engine with four forward, one reverse manual gearbox but no transfer case, with independent suspension all round.
It was designed by Erich Ledwinka, Chief Designer of Steyr-Daimler-Puch and son of Hans Ledwinka one of Steyr's first designers pre-war.

Haflinger 700 APT
The Haflinger 700 APT was first produced in 1958 as a utilitarian 4WD vehicle. It incorporated technical innovations and rear-mounted engine, forward control, and optimum use of space and independent suspension with coil and rubber springing. A number of body styles were available and options included power take off, extra low crawler gear (model 700 APL) - until the five-speed gearbox was introduced - tropical kit, snow plough and a 1500 kg capacity winch.
The chassis had a central tubular backbone and the wheels were independently sprung with coil/rubber springs on swing axles incorporating step down final drive gear cases providing generous ground clearance.
The basic vehicle was functional, consisting of open cab, tray, two seats, windscreen and engine. Doors, roof and canopies were all option extras.

A horizontally opposed, air-cooled, twin cylinder rear-mounted engine powered the Haflinger. Spur gear axle drive was employed for improved ground clearance and differential locks were available on both axles. Twelve-inch wheels were used, with the Haflinger weighing 635 kg all up.
A long wheelbase model, the 703 was introduced in 1962, available with a canvas top or a fibreglass cab and four rear seats. The 703 was 3.125m long, 1.4m wide and 1.74m high, with a wheelbase of 1.8m. Unladen it was 700kg in weight.
Production of the Haflinger commenced in 1958 and ceased in 1974, by which time a total of 16,700 units had been sold all over the world.
The Haflinger saw military service in Austria, Indonesia, Italy, the Netherlands, Nigeria, Switzerland, Sweden and South Africa. Originally intended solely for military customers, the Haflinger also found a willing civilian market.

Haflingers in Australia
The Haflinger gained a strong following in Australia, and at one time boasted clubs in several States. Today, the Haflinger is a classic 4WD gaining in value as it gains in rarity!
Some of the first Haflingers seen in Australia were imported by the Melbourne company Anti-Friction Bearings Limited in the early sixties when 4WD choice was limited. They bought in their first Haflinger in 1963, and by 1966 had achieved sufficient sales to justify local assembly. Since then around 800 Haflingers have been assembled and sold in Australia.

The first Australian Haflingers were powered by a 24bhp motor, which was increased to 30bhp in 1967, by increasing thecompression ratio from 7:1 to 8:1, changing to a dual carburettor and fitting a larger exhaust system. While an excellent off-road vehicle, one of the criticisms of the Haflinger was their lack of power.
A four-speed gearbox was standard, with the optional five-speed transmission replacing it in late 1963. An Australian modification introduced in 1965 was a three-stage air filtration system; a cyclone external filter, oil bath and paper filter. These modifications greatly improved engine life in dusty operating conditions.

Fibreglass and canvas cabs and tops were produced in Australia after 1966.
Soon after commencing local assembly Anti-Friction Bearings was purchased by Pollard Bearings, which in turn became Ransome Hoffman Pollard Australia Ltd, of Springvale. A manager of this company, Barry Jones bought the subsidiary from Ransome Hoffman Pollard and commenced trading as Haflinger Sales and Service Pty Ltd. Up to 30 vehicles a month were being assembled.

The Australian Army purchased 50 Haflingers in 1966, and others were converted to Council street sweepers in Melbourne, Sydney, Canberra, and New Zealand. Haflinger Sales and Service ceased production of Haflingers in 1975, although the company continued to import the bigger Pinzgauer. 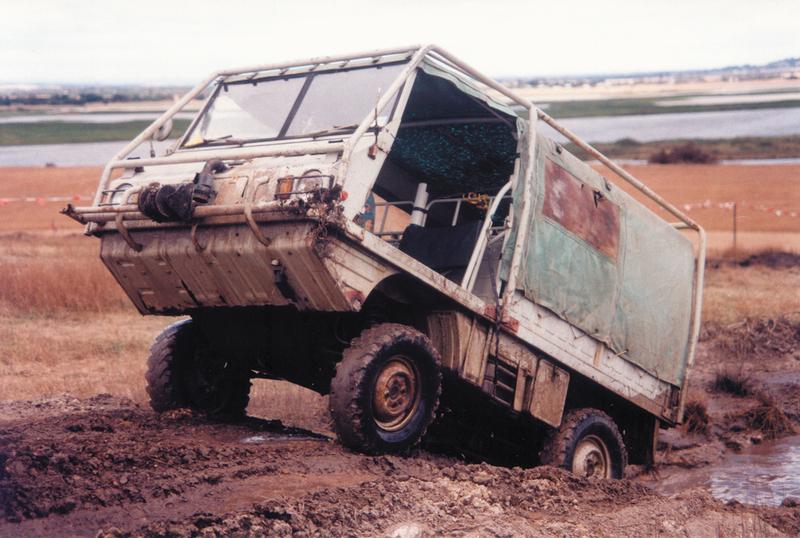 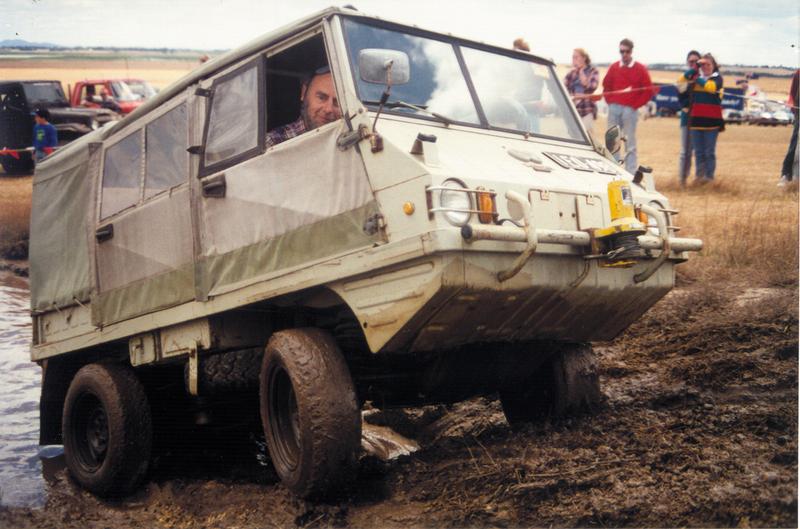